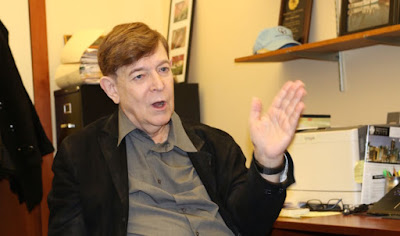 Once again, out pops reformy Eric Nadelstern and how, if only he was Chancellor (Mayor?) of the New York City schools, he would solve the problem of struggling schools and integration.  Yes, the very same Eric Nadelstern who told educators that two thirds of the teachers are ineffective. His proposal is to eliminate neighborhood schools and give students free choice to apply to any school in the District.  He calls it unzoining. Yes, the very same Eric Nadelstern who was Deputy Chancellor under Joel Klein who gave us the useless and money sucking Children First Networks and Principal Autonomy that resulted in far too many terrible principals running their schools into the ground.  It was a memo from Mr. Nadelstern that pressured superintendents to hire newly minted Leadership Academy principals, many of them with limited classroom experience.  You can read it Here.  Now Chalkbeat has reached out to Mr. Nadelstern and asked him how to best integrate and improve struggling schools  His response can be found Here.

According to the article, Mr. Nadelstern's proposal by unzoing schools would help integrate schools and even struggling schools (he thinks they should be closed) would benefit with a more diverse student body.  However, his proposal does not reflect reality.  First, some Districts, like District 7 in the Bronx has a student population that is almost 100% minority and poor  There are few middle class and/or White/Asian students to make the student body more diverse. Moreover,  parents would not be happy to have their elementary school children being bused across the District to achieve Mr. Nadelstern's dubious goal.  Finally, how much more will it cost the City to supply the buses and personnel necessary to transport the children?

Mr. Nadelstern's proposal was tried, for the most part, in Atlanta Georgia and it resulted in "white flight" as the middle class, both Black and White, fled to the suburbs and left the Atlanta school system with a minority and poor student body.  Further, in New York City, the high schools are unzoned and did it result in a more diverse student body?  The answer is no!   Many of the unscreened high schools are of one race or another.  For example the unscreened high schools in Southeast Queens are 80% or more Black with the rest Hispanic.

Interestingly, in the Chalkbeat article Mr. Nadelstern finally admitted that when a Bloomberg small school was opened, they were given the extra support for the school to succeed.  The new school was allowed to exclude "high need students",  like English Language Learners and Special Education students for the first two years and were given extra resources to run smaller class sizes,  The result, not surprisingly, was the first two graduating classes showed a vast academic improvement, when compared to the closed large comprehensive school it replaced.  Of course now many of these Bloomberg small schools have been in existence a decade and the latest statistics show that without the extra resources, small class sizes, and the elimination of the student exclusion policy, the schools showed little improvement over the large comprehensive schools they replaced, except for their bogus graduation rate.

If all of Mr. Nadelstern's proposals in the Charkbeat article became policy, the New York City Public School system would see a mass exodus of middle class and academically proficient students to the suburbs and private or parochial schools.  Thank goodness Mr. Nadelstern is no longer part of the DOE and cannot implement his dangerous reformy ideas on the school system.
Posted by Chaz at 6:22 PM

Chalkbeat should have asked him if he felt any guilt for the sewer system of schools he left in his wake. There's more life in that abmonation of a toupee than there is substance in his farcical proposals. Chalkbeat really is the National Lampoon of Education. Who cares what he has to say! He's an abject failure that hurt many students and teachers. Unfortunately the turds he expelled from his bowels are still in charge of many schools.

Eric Nadelstern's favorite issue is promoting Eric Nadelstern. If you follow his career he switches sides on issues in order to aggrandize himself and suit the times and align to who is in power. Went from anti to pro over and over. Makes believe he is an objective expert but is not. Follows the money and power.

Can anyone say hair club for men?? The fake wig on his head matches his fake brain inside of his head

I worked in a school in the bronx that was all black and latino, except for exactly ONE hapless white boy. He was from an Italian background. It was so sad to see him. He had to adopt 'hood mannerisms to survive. As I watched him descend all year into ghettoism, I just shook my head and lamented his sad fate. His parents committed child abuse putting him in an environment of thug values and gangs.

Go into an all white school in burbs and you'll see the same faux ghetto nonsense. It's part of the American culture for better or worse. Listen to the music your kids listen to, it may surprise you. There definely is racism from both sides, but the black kids aren't trying to act 'white' - the white kids are definitely trying to act black. It's bad for black kids in an all white school - my adopted nephew has kids asking if they can touch his hair and some of the parents won't let them into their homes because he's black - he's also seven years old.

I've seen it myself over the years with Asian students. Always thought it sad that for some who no doubt were first generation and whose grandparents and perhaps parents were peasants are now adapting "hood mannerisms". How sad.

@4:42 i had a similar experience except the black student was the only one in the school. He was harassed, insulted, taunted daily. The other students lived by a code of cheating and lying. It was disheartening how not one peer came to his aid. The parents were worse.

@4:42 i had a similar experience except the black student was the only one in the school. He was harassed, insulted, taunted daily. The other students lived by a code of cheating and lying. It was disheartening how not one peer came to his aid. The parents were worse.

He really should get rid of that dead raccoon on the top of his head.


Dozens of ATRs have written and called the UFT for clarification and information. Has anyone received a response? I haven't.

'There has been no new ATR agreement and no plans to change anything for next year. Do you contribute to COPE? I urge you to do so regardless of whether you retire, quit or are unexpectedly terminated, because if the NY State Constitutional Convention meets you will lose your pension and TDA. Your monthly dues barely cover the our expense in protecting you ATRs, who wouldn't have jobs if it wasn't for us." Bronx UFT Office

@4:42 the poor sweet black child was able to withstand the ignorance and cowardly behavior of both the parents and children by remembering how smart he was and how his tormentors struggled academically while he was the top student. I remember the white students trying to antagonize him one day by asking if his grandparents were slaves. His response was priceless,he said his great grandmother was a slave because the white family was too lazy and dumb to do their own work.

Is that a raccoon humping his scalp?

If there is no new atr agreement then why has rotation ended?

So are 7:19 & 4:42 it sounds like you're saying that those white and Asians kids were:
1. Uncertain about their own culture or
2. Very attracted to "black/latino" culture either way, young folks like what they like!!!