Vindictive Principals - We Won The Battle At CPE1 But Not The War. 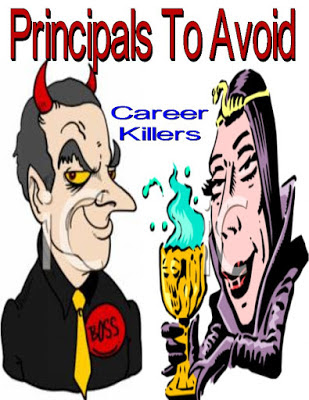 After a long and protracted battle to remove vindictive Principal Monika Garp, the teachers and parents at CPE1 finally forced the DOE to remove the Principal. However, the war against the 399 other principals that should not be running their schools remain.  The Farina administration has allowed these poor leaders to remain in charge of their schools and even has empowered them to go after veteran teachers to force them to either retire or file 3020-a termination charges against them.

While some battles are won.  CPE1 and Townsend Harris, most are not.  Take a look at William Cullen Bryant, the Campus Magnet schools of Arts and Humanities and Math and Science, or Flushing High School to name a few. Poor leadership results in poor school morale and students not achieving their potential academic ability since the unstable educational environment of the school limits that potential.

Until there is a real change in the DOE and our union leadership decides to become pro active in protesting and removing vindictive principals, our educational system will remain dysfunctional.
Posted by Chaz at 3:32 PM

My principal of 10 years has discontinued a few probationary teachers but has not brought up 3020a on any tenured teachers as of yet. With the looming teacher shortage maybe there will be a change of tone at the DOE to get these vindictive principals to chill out. But then again. who I am I fooling.

The UFT has become an arm of the DOE. It will protect principals over teachers.

I guess that at this stage in my career that I can say that I am "old school". Been teaching in NYC since the 90's when Rudy Crew was in charge and the UFT actually cared about the rank and file. Just wanted to chime in and say I miss those days but I am still proud to be a NYC public school teacher. As for the UFT, I am not sure what I will do in regard to paying fees to them in the future. Let's see what happens.

Those of us who suffered under Garg's tyranny in her previous school are celebrating. Now if only her co-pilot in terror Minerva Zanca would be ousted from the DOE. (Last I heard she moved from admin to a cushy guidance job.) The things we, as an abused staff, saw and suffered through would make evil tyrants everywhere wink in pride.

When's the UFT going to tell ATRs what's happening? Amy why don't you send out some smoke signals or carrier pigeons to us ATRs?

I got my excess notice on Friday. Screwed again. Three years hired provisionally and three years excessed every May. Fuck you UFT, this is how you allow your best teachers to be treated. No more COPE.

Amy and the UFT are useless.

10:11 PM, If you aren't a dues paying UFT member in retirement, don't you lose Welfare Fund Benefits (vision and dental)?

to 1:46 - Yes. When you retire you have to stay a UFT member to get eyeglass and dental coverage. If you are not Medicare age the union also provides a drug plan. The problem is that it has limitations. They have a formulary and if you meds aren't there you have to go through a lot of nonsense to get the meds approved. Then the med comes with a whopping co-pay. Of course when you retire you can find a drug plan other than the UFT plan.

A note to those planning to retire - I know a lot of retirees who have opted to join AARP and use the AARP United Healthcare plan - it is far superior to Emblem Health or GHI. The union also pushes SHIP - a supplementary plan which is of little value unless you are in Medicare.

The month I turned 65 the City Office of Collective Bargaining informed me that I would have to go on Medicare as primary insurer. I elected to keep GHI as secondary insurer.

My advice - take the Republican medical plan - don't get sick!

Gatinvisible said...
This comment has been removed by the author.
10:21 AM

IF YOU ARE OFFERED A POSITION UNDER PRINCIPAL JANET HUGER DON'T TAKE IT. SHE IS ONE OF THE WORST PRINCIPALS I'VE EVER SEEN IN MY WHOLE CAREER. VERY ABUSIVE TO STAFF AND ATR TEACHERS.

CANCEL YOUR COPE CONTRIBUTION. WHY ARE WE GIVING EXTRA TO A UNION THAT DOESN'T PROTECT OR REPRESENT US?

WE NEED TO ALL FILE A LAWSUIT AGAINST THE DOE.

Our Union has been a disgrace.The discrimination and abusiveness on ATRs will stop, only when they can no longer find enough inexperienced and less qualified teachers which is starting to happen. The ATR pool is in nature discriminatory against the most veteran workforce. Most schools that have pushed out their most experienced workforce are now in trouble. Many principals went after experienced teachers, unfortunately now they realized it was a big mistake. They are going to have problems recruiting and retaining new teachers.

If anyone wants to work for Dwarka you will find a job. She is going to have a lot of vacancies. Many people are leaving her again.

Especially Principals that are dragging schools to the ground.

They are clueless since they are part of the incoming shortage of teachers.

No thank you to working for Dwarka. I heard more stories about that principal than every principal in the DOE as a whole. I prefer to work at burger king!

Fariña thinks Dwarka is a great Principal when many good teachers are leaving her.

Farina commended the corrupt principal Meri Yallowitz at my school a few years after she was in the paper for cheating. The principal beat cheating charges and goes after teachers who will not pass undeserving students or cheat on regents.

Farina commended the corrupt principal Meri Yallowitz at my school a few years after she was in the paper for cheating. The principal beat cheating charges and goes after teachers who will not pass undeserving students or cheat on regents.