How DOE Policies Discriminates Against Different Employees In The School System. 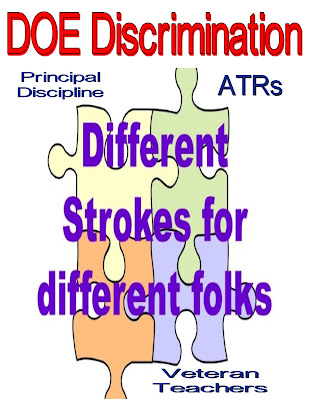 If you are an outsider, the DOE appears to be the guardian for an equal education and equal opportunity.  However, when one looks deeper in the DOE policies they see inequality in many of the discriminatory actions of the organization.

First, the DOE's policy of "fair student funding" (fsf) discriminates against veteran teachers.  Few veteran teachers can change schools since the fsf penalizes schools who hires a veteran teacher due to their relatively high salaries.  The Open Market Transfer System is a joke for teachers who have ten or more years of experience since all the vacancies go to either "newbie" or untenered teachers, due to their lower salaries.  This will only change if school budgets are no longer held accountable for staff salaries.

Second, the DOE continuously tries to discriminate against the ATRs.  First, they convinced our union to allow schools to hire "newbies" outside the school system instead of excessed teachers.  Then they made every effort to demonize the ATRs as lazy or bad teachers.  Next, they made ATRs second class citizens in the 2014 contract.  Finally, they discourage ATRs from taking per session jobs like Regents grading, or school based activities by not informing ATRs of these opportunities.

If the ATR won their 3020-a termination hearing, the DOE discriminates against them by not offering them vacancies and discourages principals from hiring them.  They also put a red flag , known as the "Scarlet Letter" to inform principals not to hire them even when the 3020-a arbitrator found them innocent of the charges!.

Third, principals who commit offenses are presumed innocent by the DOE while teachers are removed and presumed guilty.  This "double standard" is part of DOE policy and the latest example is the Principal that allegedly was DUI when she crashed her car into a police cruiser but still retains her position as school principal.  You can read the story Here.

Finally, the DOE discriminates against whistleblowers and will rather file false 3020-a charges against these teachers then take the necessary actions to correct the problem.  The CPE1 fiasco is a prime example of this.

The DOE continues to discriminate against veteran teachers, ATRs, whistleblowers, and practices a "double standard" when it comes to the removal process between administrators and staff.

List of teachers discriminated against in my school:
-Anybody older than the AP;
-Anybody who doesn't worship at aforementioned AP's feet 24/7;
-Anybody smarter than all administrators;
-Women who aren't under 30 and/or don't have big boobs (sorry for being slightly graphic);
-Anybody with health issues who has to take a medical leave (two teachers, both with school related health problems have suddenly become ineffective because they had to take short restoration of health leaves).

I pray nightly for good health and a buyout. I wish those of you nearing the end of your careers the same.

Yes!!! A scandal or incompetence will land an administrator a job with a long meaningless title at central! What a joke!

Chaz,
You omitted discrimination against teachers who are verbally and physically assaulted by District Reps. For example, OSI substantiated my complaint against former Brooklyn DR Tom Bennett who slammed me after a Chapter meeting at Legal Studies and screamed that he was going to get Mulgrew to "beat the sh*t out of me." Yet the DOE neglected to discipline him. Instead they sent OSI's findings to UFT Chief Shyster Adam Ross who refused to share any further information with me, the victim.

QED: UFT leadership is to the DOE as Dita von Tease is to Le Crazy Horse Saloon.

Philip,
QED: UFT is to teachers as Randi Weingarten is to Le Crazy Horse Saloon

Most of us become disillusioned after six months in the DOE. The rest take a year or two, but even the most die hard 'believers' I have worked with eventually break and realize the injustice, hopelessness and futility of the 'system' for one reason or another.

12:38 wrote a list that could easily be transferred to my school. The only thing missing is that if you're a white male, you are often treated as a lesser being if your supervisors are non-white males, which is usually the case. All the modern 'social justice' hate-speech against white men and their 'evilness' is breathtaking in its scope and brazen claims.

How many times have I heard admins talking about 'privilege' and 'white racism' and all that when I'm sitting right there in the forum? Too many to count. Even though white men created the modern world, created the very concept of equality and rights and discovered or created nearly 99% of everything of significance in the last 1000 years, it doesn't matter. If you are an older white dude, you are lucky if you even end as effective each year.

For all its claims of being built on 'social justice' and 'inclusion,' the DOE is a hotbed of racism, favoritism and injustice.

I know my rights and exercise them. For example, I will take a duty free lunch and will not stay an extra minute when the PDs aren't officially done after the AP starts late and says 'I need just a few more moments'

This AP has said to rookies that she wants 'team players'

The DOE likes untenured, young and yes teachers, unfortunately they are going to run out of thus supply. So they better stop targeting older teachers.

The UFT is worthless.

Dwarka rates younger teachers more favorably than older teachers. There has been a clear pattern of this going on.

Discrimination against ATRs by field supervisors should stop immeduately. The harassment should stop.

Chaz I have a great idea for the DOE regarding the ATRs. While most ATRs have been stable at one school this past Spring, term 2, then why not have all ATRs stay at their current schools for next year?? Survey the principals and if they want to retain the ATR they can, if not then reassign.

This would simplify the situation and everyone would be happy. Any thoughts out there from other atrs??

Older teachers are targeted more often because they have become expensive for school budgets.