Why NYC's Small School Miracle Is A Mirage. 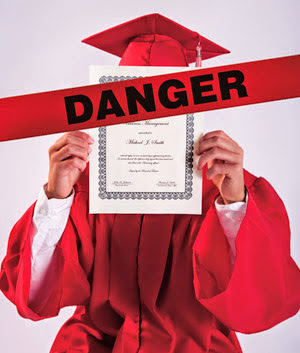 In Monday's New York Times there is an article on the lack of Music in many of the NYC small high schools that were created from the 69 large comprehensive high schools that Mayor Bloomberg closed.  While the article was accurate on the lack of a Music program, it only scratched the surface of the  problems with the small school miracle that Mayor Bloomberg and his education reformer administrators at the DOE claimed.  Let's examine the issues:

Graduation Rate:
The first thing the education reformers will bring up is the small school graduation rate increased substantially.  However, when you consider that the average small schools that came from the large comprehensive large schools had  only accepted a maximum enrollment of half the students of the closed large school, which students do you think were left out of the small schools?  The answer was the self contained Special Education students, the English Language Learners, and the students who had academic, behavioral, or attendance issues.  Moreover, the DOE ensured a higher graduation rate in the small schools by allowing these schools to exclude "high needs" students and while most large comprehensive high schools suffered from budget cuts that resulted in some schools receiving as little as 78% (Flushing high school for one) of their fair funding, the new small schools were fully funded at 100% and in some cases received extra funding of up to 50% more that their fair funding.  Finally, the DOE allowed these newly created small schools to keep their number of students down by excluding the "high needs" students and still be fully funded.  It's little wonder the first few graduating classes had a higher graduation rate. The cohorts were different from the cohort of the closed down large comprehensive high school it replaced.

Academic Fraud:
To keep up their graduation rate after the small schools were eventually required to take "high needs" students after a couple of years of excluding them.  The small schools were still allowed to exclude self contained students and English Language Learners who traditionally had low test scores and graduation rates.  The student cohorts became increasingly more like the large comprehensive schools they replaced.  Therefore school administrators resorted in "academic fraud" to jack up the graduation rate by giving struggling students "credit recovery" courses. and administrative inspired "scholarship guidelines" that linked a teacher's effectiveness to meeting the goal.  For example most school had a scholarship guideline of 80% passing of a teacher's roster, including no shows.  Failure to meet that goal could result in a teacher being rated "ineffective"  or  "unsatisfactory".  Furthermore, some principals would change grades from the teacher's failing to passing and would intimidate teachers, especially the untnured teacher to accept the changed grade.  Finally,  some schools go a step further by implementing a "blended learning" scheme that allowed all students to use online instruction rather than having a teacher instruct the student, they developed a blended learning program that had one teacher in charge of 50 or more students and the teacher was usually not certified in the subject and failed to provide adequate instructor.

What's surprising to me is that Bloomberg is blasting Trump and his lack of integrity in the media. People are applauding Bloomberg for doing so and have no idea the damage Bloomberg's done to NYC public schools. Let him attack Trump all he wants, but Bloomy was not a heroic figure for the working class of NYC. (He left office a much richer man, as will Trump.) The vast majority of people have no idea what he did. Same with Gates and Zuckerbeg. If you utter a word against them you're attacked. Small schools have never been the answer for anything but dismantling traditional schools and opening for profit corporations to raid the public's trust and tax dollars. The UFT was completely impotent during the Bloomberg era and facilitated his plans with the 2005 contract. (They also unbelievably opened up their own charter schools.) Now we must stay in UFT because they have been so successful at beating back the robber barons? Oh yeah, they got veteran teachers permanent full time roving substitute jobs, for which we are supposed to be eternally grateful.

For purely selfish reasons I would ask people to stop ragging on small schools. The per session opportunities are beyond amazing. They never have enough people around to take care of all the needs of the school!

The small schools initiative was created by billionaire pal Mr. Gates but gates has said publicly that the small schools "experiment" was a failure. Bloomberg is the biggest fake person on this earth and 8 25 is so right that most people do not know the damage Bloomberg did to NYC schools.

If I ever me Bloomberg in this street I would look for a stick like the one Chucky uses in the movie with the teacher.

Because of Bloomberg we have ATR people suffering in a system of neophytes who know squat except for the iPhone in the back of the pants. The kids are clueless as ever and Bloomberg is still a dwarf.

I work in one of the actual small schools (not a carved up "real" high school), it's ok, neither great nor bad, but I wanted to mention there's barely any per session here though.

Chaz, one thing you missed in the academic fraud was the mandated grading schemes. It used to be tests were 100% of the grade, then a decade or so ago that got watered down to 80%, then 70%, now in many schools tests only count toward less than half of the grade. In mine tests are only 30%, which means if a kid comes to class, does the "cooperative learning" (i.e., copies) and hands in copied homework, he passes even with a 0 test average (in fact, many don't even take any tests!). Even in good schools like Tottenville on SI, the principal from Brooklyn instituted one of these schemes, where tests are only 25%! It's a great way to run a school into the ground, as students realize there is no incentive to excel in school.

Atr 3rd year
1) no lesson plans
2)no calling parents
3) no meetings to attend
4) very few classes to cover.
5) salary about to become 119000
Why would I ever want to back into a class.

to 8:40 yes I am an ATR and hopefully will continue to stay an ATR

At my small school the pass rate wasn't good enough for the admins, so they switched to jumprope from skedula and voila! Everyone is passing even if they only did handful of assignments all semester. No joke.

I’ve been an ATR for 5 years and have never worked in a school where I got less than 5 classes a day to cover. Many of them have been dangerous and hopefully I’ll be placed in a teaching position so I can get a break from the constant abuse.

This year has been super easy and relaxed as an ATR. However, I have it good and I know it. I do miss teaching. I get sick of telling people that I'm a teacher but not in a classroom. I also feel I've become so used to not having anything to do and leaving right at the end of the day.

Oddly enough, the school I am at is one of those old big schools and there are amazing things I see here everyday. Of course, it's all about the quality of kids.

I am a teacher in one of these small schools that came from a carved up high school. It is a sham through and through. Our school motto should be "A fish rots from the head, down."