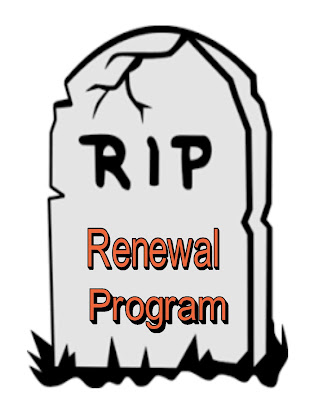 Mayor Bill de Blasio finally threw in the towel and is terminating the costly and academically questionable school renewal program at the end of the school year.

Worse, that any school that was designated as a Renewal School was marked as poorly performing and many parents refused to send their academically proficient child to those schools.  Moreover, the Renewal High Schools lost more and more students over the last four years as few middle school students would apply to them due to the stigma associated with them.  Finally, the Renewal Schools suffer from high teacher turnover, large class sizes,  and has an inexperienced staff, not a good situation for academically struggling students.

In addition, the Renewal Schools had poor leadership and an an over abundance of administrators with conflicting and overlapping directives that only confused and dispirited the school staff.  Further,  many of these administrators were removed from their previous school for misconduct or incompetence.

As a member of one of the few schools that escaped the renewals trap, I can attest to the fact that tons of money was wasted on coaches, PDs that had no relevance, extra paperwork and ineffective programs.

Our staff is burnt out and dispirited.

For $750 million they could have hired 10,000 new teachers.
Class size could have been reduced at the renewal schools.
Instead $750,000 million was flushed down the toilet.

I feel like this is more a case of bad leadership than a bad program. Schools need more social workers and psychologists (at least where I work) amongst many other things. This program had a lot of potential but like most things that go through the DOE was squandered.

Yes. Diblassio's first initiative should have been to cap class size at all Renewal Schools at 25. Studies have proven that students do better in smaller classes, not smaller schools.

Many bad Principals are destroying our schools and the UFT is looking the other way.

$770,000,000.00 million dollars of tax payer money absolutely wasted and while this is all going on no one says anything?. This is so typical of a the dysfunction system that NYC DOE has become.

No instead they hired no nothing newbie counselors and social workers while they had seasoned professionals sitting in the teachers lounge. Sorry but you cannot make it up.

For 750 million dollars, they could have had a teacher buyout

@ all of you I don't know about 750 million, or reduced class sizes, or leadership this and that, or PD's but when you talk about "TOILETS" "BAD PROGRAMS" I know your talking about New York City schools.

They probably hire too many newbies.

I don't think the goal of those in power is to educate anyone. If people were educated, the corruption would be exposed and realized by the masses and those in power would lose their positions.

The appearance of concern and interest is enough to fool the masses. Throwing tax dollars in this or that direction is enough to get people elected, keep people in power, and provide jobs for cronies.

For 750 million dollars they could have had a teacher buyout

any chance with the democrats in charge in albany that we get offered a tier 4 buyout- say for 25 years in or 50 years old?
lets be honest they will never offer abuyout for tier 6.

A 25/50 incentive should be passed. It's obvious that the DOE does not want Veteran teachers at the maximum salary. So, why force them to work for 30 years and have them accrue more years at the top of the pay scale? Every year they leave before 30 years would be 2% less in their pensions and one less year the DOE would be paying a Tier 4 employee at the top of the pay scale. They would be replaced by a Tier 6 employee at half the salary.

The Tier IV 25/55 was a one time deal. The bean counters figured out what percent would take the deal and what percent would procrastinate and not sign up. Incredibly there were people in knew in the DOE who did not sign up. I've been home retired now for 2 years. The UFT couldn't give two hoots what your concerns are. So I really wouldn't count on a buy out. I feel for you my brothers in arms.

They don't need to worry about buyouts and incentives for older teachers anymore.
They have Danielsons and psy-ops to force older workers out.
The terror these new admins try to cause is off the charts.
You know something is wrong when admins reduce staff members to tears of anguish on a monthly basis.

Well a buyout still eases costs on the city both short and long term- i have my25 but still over 5 years to 55.
i aint sweating it as it takes 3 years to get rid of a teacher ,
still i would take a buyout if offered as it would allow me to do other things with my life.
and once they get rid ofthe tier 4 teachers-esp those who can already recieve a fullp ension the city will be reducing costs inperpiturity

@9:07
yes i see admins abusing younger teachers
older teachers are just like "f" off
i mean come on now- you put in your time

9:07 PM is exactly correct. Why would they want to spend one additional penny when they can force you to quit relatively cheaply. As long as these abusive techniques are allowed to exist, no veteran teacher should be resting easily. This is the issue the UFT should be concentrating on