Comparing An Apple To An Orange 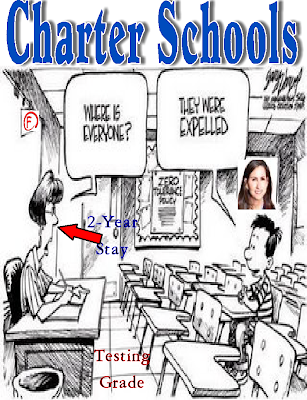 District 9 of the Bronx, a high poverty and minority neighborhood, saw over 50% of the students fail the Algebra I Regents.  Moreover, only 2% reached the top tier scores   By contrast  Success Academy 2 in the Bronx had a 100% pissing rate and all were in the top tier.  However, on further inspection its like comparing apples to oranges.

If you read only the New York Post you would think that the above paragraph is all there is,  Sure, District 9 has academically struggling schools but that's due to high percentages of Special Education, English Language Learners, homeless, and family dysfunction, both financially and the lack of a two parent household.  By contrast, Success Academy 2 of the Bronx have few Special Education students or English Language Learners, and homeless students.  Furthermore, the family situation is much more stable than in District 9.

A closer look at Success Academy 2 of the Bronx show what the New York Post failed to include.  the 30% of students who dropped out (pushed out?)  of the school since 6th grade when there were 72 students.  That left only 53 students to take the Algebra 1 test.  I strongly suggest that you read Gary Rubenstein's blog who did a deep study of the data and showed how poorly Success Academy students did on the Geometry and Algebra II Regents..

With only 26 out of 86 credits required to pass the Algebra I Regents, I'll never understand how anybody fails.

The data is accurate. Remember Charter schools don't force their teachers to instruct acording to Danielson. NO student is adequetly prepared for exams in a Danielson classroom. That is the real story. Public schools are being sabotaged by the Danielson rubric of observations.

What does Danielson have to do with anything? I have okay results and Danielson does not change how I teach at all.

In many schools the model is now simply the teacher 'modeling' how to do an activity packet (worksheets, readings with questions, some partner discussions) and then the teacher steps back to "coach" and "facilitate." At NO TIME is the teacher to give and content to the students through "teacher-centered" instruction.

The students must teach themselves and each other.

This is not a joke. All of the above has been directly dictated to us by our admins over the last 3-4 years, and other schools in NYC are doing this too, as my casual chats with other teachers at our annual multi-school PDs reveal.

In my school, the admins then use Danielsons as a cudgel to beat you with, marking you low if you speak about content at all.

When it hits your school, you will know why so many teachers complain about it.

@10:13 am - Try explaining that to my son, DeShawn!!! I tried explaining 26 pts out of 86 points on Algebra regents and it went in one ear and never came out of the other. He just stared me down like we were in a prison yard.

By the way - we are having a 5 year Rubber Room Teacher Reunion in August. Anyone who served time in a rubber room in 2014/2015 school year is invited. Place to be announced. We are currently looking for restaurant/bars in Manhattan.

C.C. is going to be there. Remember "cool cat" and Francine with the big booty and fake tits? They have confirmed. Ran into DB the other day. DB is now a principal in the Bronx. For those who served time in the rubber room with us - DB was the teacher in 2014 who was set up by his dirty principal in Queens. His principal directed him to turn off the elevators so Carmen and dumb Dorita could not go to any other floor past the 1st floor. When Carmen flipped out - the principal told her DB did it. Well DB is now a principal in the Bronx and he's hiring ATRs and former rubber room teachers but nobdy wants to go to the Bronx to work.

That is so sad that is not what Danielson was intended to do. That is administrators creating their own misunderstanding.

Welcome back Shady. You were missed

What happened at Laguardia High School in Manhattan? Why the principal did not care for the arts? Why nobody didn't tell her that she was at an arts school? She thought she was at Stuyvesant and shit. Makin artists take AP courses instead of dance and music. I knew some crazy shit was going on with that principal when she would not accept DeShawn. DeShawn a comedian yo. When he auditioned he had the highest and craziest audition points. Bitches gave him a standing OVAtion but we wus told that DeShawn did not have the grades to get in. Now, DeShawn is going to make the DOE pay. He is going to close down another high school or two before he drop out of high school. Any teachers reading this: you made DeShawn into DeShawn. You created him. When I asked you to please suspend him - your administrators refused. DeShawn should have been expelled years ago.

Success 5th-8th grade infested my school in the bronx. As they try to squeeze us out the building. These charter schools are a joke especially with teachers grading their own ids regents, smells like bullshit.

@ Shady do you know the school this DB is the principal at?

The good old days of school system are done. No offense but if students come to our NYC schools who cannot speak or even write they should be at a specialized school, too many of these types of students coming in. Can imagine chances for them to pass the regents