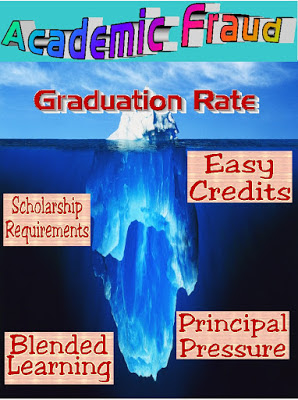 Councilman Robert Holden has asked the federal government to investigate the ramped grade fraud at the New York City schools.  The clearly frustrated Councilman has tried to convince DOE officials, including Chancellor Richard Carranza to seriously investigate the academic fraud but was ignored.  I have written many posts on the widespread academic fraud and you can find those posts under "academic fraud".

Why doesn't the DOE investigate or punish schools for academic fraud?   Simple, the DOE rather have a higher graduation rate and an illusion that academic progress is being made when the truth is far different. The DOE allows schools to cheat by ignoring the use of easy credits, blended learning, and allowing principals to require that teachers pass as much as 85% of their students.

Will the Federal government investigate the academic fraud?  I doubt it but if they do, it will be easy to prove.  Read James Eterno's ICEUFT blog for the actual letter to the U.S. Attorney..
Posted by Chaz at 3:05 PM

Please do not push for such an investigation.
It is not the abusive principals who will get in trouble for ordering teachers to do it.
We the teachers will be blamed (as always) and it is we who will suffer.

First they will implement a more 'rigorous' teacher evaluation system to fire more of us.
Then they will vilify teachers in the press (as always).
Next they will bring even more coaches, trainers and PD (all useless).
Finally, the teachers who see their colleagues getting roasted will get the message:
"Pass everyone or you're next."

Isn't this how we got into this mess to begin with?
It is politicians pressuring superintendents to produce numbers to make them look good.
The supers then pressure the principals and then they all get on our teacher heads.

Meanwhile, the families are COMPLETELY absolved of any responsibility, no matter how bad the parenting is.

The students are COMPLETELY absolved. We cannot punish, er, give consequences, in any way. We cannot even given them homework now for crying out loud.

The system they put in place on a lot of us now is useless 'group work' and 'student discussion' which is really pretend learning or talking about their feelings.

Don't even get me started on Academic Fraud in North East Queens now that we're flooded with S.E. Queens kids. Don't educate them. Don't expect them to tow the line or their parents to take responsibility for their grades and behavior. Nope. Give them all the passing grade or be tormented by your AP and, in some schools..not mine, principal (in my school the APs are obnoxious enough to get that pass out of most) In my school if a teacher refuses to pass the kid, they just give the kid a change of class (even if it is the first week of May) to that of a teacher who will pass the kid.

Don't even get me started on YABC programs. I worked for them for 7 years. Truly sickening what goes on there...in the name of getting kids to graduate.

This is all DiBlasio's fault.
In making two highly inappropriate choices for chancellor (one a senile grandma and the other an outright bigot, dwarf with a chip on his shoulder) he's done nearly as much to ruin our schools as Cathy Black and Joel Klein.

At least those two let schools discipline the children.

Under DiBlasio's two nutcases, if a child acts out in or fails a class the first question asked is "what color is his skin?" with the second being "what color skin does the perpetrator or teacher have?"

This is sick day and age in the world of education. I can retire soon ( less than 7 years) but not soon enough.

They are a bunch of investigators that do not investigate anything.

Dwarka will never get in trouble becasuse the UFT is also corrupt.

I think 4:18 is right. An investigation will all fall on the teachers. Teachers will pay the price and if possible, things will get worse for teachers.

In a few years, the only people who will become public school teachers will be the same people that we pushed through with no standards. On a small scale, I know this is happening now because of a few of the younger teachers working at my school. I don't know how they graduated high school, much less college!

Fuck Diblasio, the ego on the guy thinking he can even run for president when he cannot even run the city.

This is just the beginning, its only going to get way worse before it gets better. All comments on here are accurate and factual.

I want to get 2 more years and make it to 20 before trying out this hell hole. Just throwing it out there but feel like ENL students should be in same schools with students who come here barely speaking english.

The DOE is relying on OSI to investigate itself? That's the biggest joke of all! The goons at OSI and SCI are such bumbling idiots that a team of trained monkeys sitting at typewriters could conduct a more accurate investigation than those incompetent clowns. This system is truly going to hell in a hand basket - no wonder the number of applicants for teaching degrees has dropped by over 60% in the past 10 years!


Anyone want to guess my pension?

As a teacher, I want zero investigations.

I’ll admit, I have not failed a student in at least 10 years. It is not worth it.

I pass them all, tell them how wonderful they are, volunteer to help at PDs and I’m not hated by admins.

Go along to get along.

The kids can’t learn any way, so why try?

Nobody understands why she is stil there.

They can't just strip your license away. Even if you were terminated, you would still need a separate hearing to revoke your license. You should gather evidence and report them to the NY Post.

Write to Councilman Holden at District30@council.nyc.gov instead of whining here about your principal and AP. We all know OSI and UFT won't do anything.

I looked up Marie Guillamare and found her picture. I understand why she is still there.

Marie was in the Roosevelt campus before Energy Tech and I taught with her in Jane Addams for many years. I’ve known her for over twenty years. I saw her at Roosevelt while I was an ATR and she was an AP there - I know her for over 20 years - when she first saw me gave me a hug and kiss and said I better start looking for a job because all ATRs needed to fired and were hopefully going to be by the next school year. I was shocked and angry. She has unfortunately drank the whole pitcher of Bloomberg/Klein koolaide

Wowwww...Marie is a psychopath. I remember working upstairs from Energy and Tech two years ago. She would constantly torture several of her staff members. One staff member that always sticks out was poor ole Mr. Johnson. A hard working school aide. Came to work everyday to work and came early and stay late. She would send him on school trips in below freezing temperatures(he was over 75 yrs old), yell at him and get this tell other staff members to remind him that he should quit because of his age. A few times he was rushed to the hospital due to stress and blood pressure rising there. One time I alerted her that the ambulance had came for Mr.Johnson and she said one of the most stomach churning things to me “I hope he knows the ambulance fee is coming outta his pocket not ours!!” I’m sure there are many other stories to come out about this sick woman. I pray for all her victims in this “interesting” DOE system.

There are too many inveetigators in the DOE not doing their job.

The UFT, and the DOE inveetigators like to turn a blind eye on corruptuin.

It is a disgraceful harm that the famous Leadership Principals are doing to our schools while the UFT turns a blind eye.

Dwarka has been doing it for years and nothing happens to her, the school is just getting worse and worse.

The only thing they do is go after teachers with integrity.

We have a Union that does not protect the teachers anymore.

They are passing students magically.

It is very shameful that these administrators get away with everything.