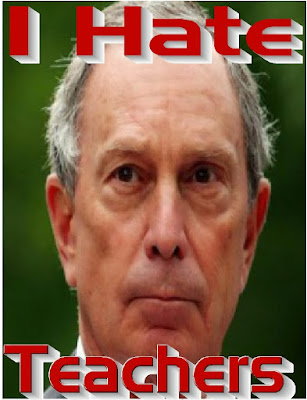 After weeks of speculation, Michael Bloomberg has officially joined the Democratic Presidential race.  By announcing his candidacy, it shows the Michael Bloomberg is quite unhappy with the present candidates, especially Joe Biden.

Obviously, Michael Bloomberg was dissatisfied with the sharp left turn by the Democratic party and saw even the moderates shifting to the left and felt none of the top contenders will beat his hated foe, Donald Trump.

Look at my posts on Michael Bloomberg Here.
Posted by Chaz at 1:13 PM

I was at the ATRconference and is the same as last year.
Help help help help help help help
ATR don’t have a chance.
They tell us that the board of Ed is not
going to move us around but we know all of
us are being moved around a lot.
Still no bathroom keys no place to put your stuff
Being threatened by principles and AP’s
But one thing is we’re still there

Failed policies from the corrupt DOE with the blessing of Mulgrew. Hiring on the cheap and targeting older teachers on lies.

Just when you thought the Democratic Party could not get any weaker or pathetic. Trump is the best overall (not on just education policy) candidate hands down.

I wouldn't mind seeing how Mayor Pete pans out in 2024 Cannot wait until Cuomo and Di Blasio are gone, two crooks the 850 million for the mental health program is missing.

I WILL NEVER VOTE FOR BLOOMBERG. HE IS WORSE THAN TRUMP. TO BE CLEAR I DID NOT VOTE FOR TRUMP. BLOOMBERG STARTED STOP AND FRIST. HE WORKED HARD TO SCREW NOT JUST TEACHERS BUT ALL CITY WORKERS.HELD RAISES FOR YEARS. HE USED HIS POSITION AS NYC MAYOR FOR HIS PERSONAL GAIN. ANYONE WHO SAYS THEY WON'T TAKE A SALARY AND ARE WORKING FOR FREE SHOULD NOT BE TRUSTED. HE GAVE CONTRACTS TO HIS FRIENDS/BUSINESS ASSOCIATES TO BUILD THE NEW YANKEE AND SHEA STADIUMS. TONS OF KICKBACKS. DON'T TRUST HIM. PRAY HE DOES NOT GET ELECTED

It was Bloomberg who catapulted education solely into a business and children into widgets. The corruption and incompetence in the DOE exploded while Bloomberg was mayor. Yet, he thinks he did a great job!

Yes you are still here, some for 13 years. Name another city where you would still be working.

oh mikey you want to take on trump...well be prepared to be called little mikey as trump will hit this midget hard and all us union people will laugh out loud as its pay back time for little mikey

We suffered so much under the Bloomberg years.

The top-down strict management style is not suited to teachers who are people who go into teaching because they want to give back, not make corporate profits or higher statistics.

The Common Core Conundrum is fading but like a shell game is being rebranded.

The Danielson's Disaster is still here, used as a cidgel to beat us with.

2 Observations is better than 4 or more, but then they weigh more in the junk science calculations used to determine if we have a job or not in the future.

Di Blasio is a little better, but it is still worse than the pre-Danielson's, pre-corporate-style education approach.

Bloomberg has zero chance to win. For a smart guy he is making a dumb decision.

web sites like chalkbeat who came into existance when midget mikey was in control now requires a facebook account to post reactions to their biased stories.....this site which began as a quality educational site known as gotham is now a complete sham which cannot stand the reactions by the sane correcting the insane.
Go little mikey!

@9:24,
Any city with LIFO. The UFT did not save ATRs’ jobs - they lost them their careers. Will Randi bend over Bloomberg’s desk again? I bet she will - as long as he’s willing to pay, like back in 2005. Fuck the UFT.

Does it bother anyone that this dude is going to be 78 if and when he takes office? If he goes two terms, he'll be 86 when he leaves office. I'm not one to discriminate based on age, but come on he's making decisions for an entire country of people.

Of course it won't come to this, but I would honestly have to vote for Trump over Bloomberg.

Come on anyone who worked for nycdoe under bloomberg knows bloomy is a fake news creepy no personality nimwit. Just because the dude had one good idea in life that made him lots of money still does not make him smart.

Actually from his stay here in nycdoe he was a complete jerk in every thing he did for the most part. He just took away our teacher cafeterias and no one complained a lick. He took away our parking permits, TDA interest, destroyed comprehensive neighborhood schools, created the labor insane ATR pool, empowered and created the infamous principal academy, trashed educators on a daily basis.

The nerve of this old man which he really is, to want to run for president now by just parachutting into the presidential race is a just plain bull shit and anyone who votes for midget mike should talk to some educators from his past. Actually we are still under his watch still receiving back pay cause the creep did not want to give us a shitty raise.

The day Bloomberg became mayor the teaching profession changed for the worse. I survived the gotcha squads. How they brainwashed the admins who were acceptable is amazing. Talk about drinking The kool aid.

Danielson and the newest admins and teachers hired after mike and mike turned the teaching experience to shit. Fear and intimidation. Investigate and harass. Hire 99% Latin admins

Seems the majority of all the new admins I have seen in the last few years are latinos.

Revelation 11
[15] And the seventh angel sounded; and there were great voices in heaven, saying, The kingdoms of this world are become the kingdoms of our Lord, and of his Christ; and he shall reign for ever and ever.