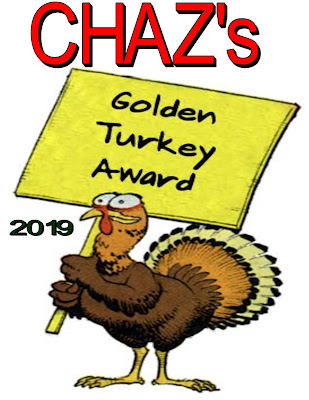 The annual golden turkey award goes to two people.  Chancellor Richard Carranza for his ill-advised integration policy that is simply a joke and his bumbling administration who can't seem to get it right when it comes to the New York City public schools.  The second person is Mayor Bill de Blasio who ran and failed to even garner 1% of voters for the Democratic Presidential nomination.

Chancellor Carranza has some good qualities, like he is not anti-teacher and is trying to get ATRs permanent positions.  However, he has failed to eliminate the ATR pool, refused to eliminate fair student funding and reduce class sizes. He also resorts to the old trick to claim that an increased graduation rate means academic improvement.

Furthermore, his racial favoritism has resulted in lawsuits by white females against his administration and for the most part, his integration policy for schools is a failure.

Mayor Bill de Blasio failure to garner support for President and his refusal to eliminate many of the Bloomberg era education policies make him a worthy recipient of the golden turkey award. Large class sizes, unenforced student misconduct issues, and lack of a full school funding has not been resolved,
Posted by Chaz at 2:20 PM

Carranza is an absolute lunatic. He deserves to be sued. As for myself, I no longer attend the racist, “kill Whitey” PD sessions on full day PD days as they make me physically sick. It is textbook facist Communism.

DeBozo for thinking he could be president! How did he ever get elected mayor of New York City?

Bloombomb for thinking anyone could take him seriously after the damage he did to the NYC school system!

UFT for not taking a stand on any issues!

TURKEY AWARD goes to all the teachers and staff of the nyshitty school system. they cry and complain more than all others and do nothing about any of it!!!!!!

2:58: One problem we have to remember is that many nyc teachers are happy where they are. I was in two different schools after I became an ATR and both schools were excellent. The students were great, leadership was great and teachers were treated like professionals. It's the teachers who unfortunately are teaching in the low performing schools with undisciplined students and poor leadership who are always complaining and writing on blogs. The good schools balance out the bad ones, so nothing is going to change. Also the country is going to think Bloomberg is good because the graduation rate went up. People who aren't teachers don't know anything about fudging numbers, lowering standards and inflating grades, so to the non-teachers in the country, who probably never heard of the term ATR or Fair Student Funding, Bloomberg did a good job in nyc. That's where we come in. We need to spread the word about the corruption.

TCA, being an online setup, resolves this concern of such aspirants and plays a critical role in saving time, money and energy costs of the aspirants.We are proud to win the trust of hundreds of students with our effectual strategies and powerful mechanism. You can come and join us as TCA Online is surely your gateway to bureaucracy.whatsapp call for
more info +923133319144

Let's take bets on which city Carranza will end up next and ruin? Damage has been done in San Fran and Houston and now NYC. This racist is not good enough to be cleaning floors at a NYC school.