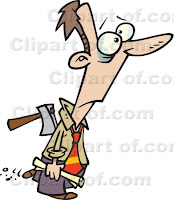 Many bloggers, including this one, have complained that the DOE investigative process is biased and unfair and questioned 3020-a arbitrator decisions. Therefore, it is important to give an example when the two results in an one year suspension, without pay or health benefits, to an innocent teacher. It all started when Teddy Smith was harassed into teaching a part-time gym class with more than 65 children (often almost 100 at one time) at The Museum School on West 17th street in Manhattan. He also has a heart condition for which he asked his Principal (Lindley Uehling) to be accommodated – although he was and is able to perform his job - but was turned down and his needs were ignored. This started Teddy Smith's journey into the "rubber room" and 3020-a charges. In June Teddy Smith finally won a small victory as a State judge overturned the 3020-a arbitration decision. Betsy Combier's "rubber room news" talks about the case in detail.


The Teddy Smith saga clearly shows the abuse of the DOE investigative process and the closed-door agreements made without a teacher's knowledge. Betsy Combier's "Rubber Room Reporter" discuss how the Special Commissioner of Investigations (SCI) failing to do a fair investigation and the arbitrator for not following 3020-a procedures in determining the penalty given to Teddy Smith.

To get a clearer picture of what happened to "Teddy Smith" it is important to see how SCI took their flawed investigation to the papers and damaged the reputation of the teacher. The Chief published the SCI press release information that smeared Teddy Smith and to the outside world that it would appear that he threatened an arbitrator. In reality, Teddy Smith did no such thing and now he must appear for yet another 3020-a hearing, while on his one year suspension!

The Teddy Smith saga shows that anytime a principal goes after you, the result could be reassignment and potential termination based upon a flawed investigation. Due Process rights? Don't make me laugh,
Posted by Chaz at 4:37 PM

Unfortunately, I am now experiencing first hand what this is like. The OSI investigator refused to listen to my responses and that is reflected in the innacurate transcript that just arrived several months later.

I had an OSI investigator fabricated "my response" in his written report to the questions he never asked me with the presence of UFT district rep. DoE investigators feel that they are above the law and can do anything they want to.

Klein and his company uses tactics commonly used in criminal investigations to trump up charges against teachers who might use poor judgement at times but never had intent to harm his or her students.

The OSI & SCI investigators always assume teacher guilt. t is their job to pervert and embellish the facts for them to show guilt.

A similar thing happened to me. My principal threatened me more than once. The district office wouldn't help me. I ended up being transferred over an hour away, overnight. I wrote a book about it. NO CHILD LEFT BEHIND? THE TRUE STORY OF A TEACHER'S QUEST by Elizabeth Blake. Just came out on www.Amazon.com Receiving great reviews. Referred to as "the Up the Down Staircase of the 21st century." I loved my students and my job, but due to the stress of gangs, abusive principals, shootings, murdered students, ended up leaving the career I loved.

Please read link regarding corruption and falsification of documents and goernment reports by the DOE, SCI and several arbitrators.