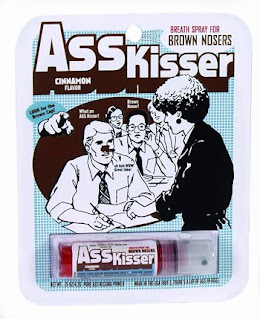 Unless you live under a rock, Michael Mulgrew will take over the presidency of the UFT, effective August 1, 2009. Who is Michael Mulgrew and what does he stand for? Good question but I have no answers for you. However, I can tell you in the past, that Mike Mulgrew was a great kisser, especially when it comes to kissing Randi Weingarten's ass. Under Randi Weingarten's tenure he has been one of the most loyal of Randi's inner circle and has a 100% voting record when it comes to union resolutions that Randi wanted passed. Interestingly, in the last Presidential elections the "Unity caucus" pointed out how John McCain was George Bush Lite when they brought out that as a Senator, John McCain voted for 90% of what the Bush Administration wanted passed. I guess that makes Michael Mulgrew Randi Weingarten Lite as well.

Trying to determine what Mike Mulgrew will do once he takes over the Presidency of the UFT will not be difficult since he will be responsible to complete the parameters of the new contract that Randi and Mayor Mike have agreed on. I expect only two things from Mulgrew when it comes to the new contract. There are no givebacks and the elimination of the ATR pool, meaning that all excessed teachers must be placed before the DOE can hire "newbie teachers". Since we are stuck with the pattern of 4% and 4% for the two year period (minus the 0.58% that Randi already gave back to the City), nothing less is acceptable.

It is common knowledge that Michael Mulgrew shot up through the ranks of the UFT as he "brown nosed" his way into Randi Wiengarten's inner circle as Vice President of Vocational Schools and an apparent protege of Tom Pappas. While I have no problem how Mr. Mulgrew rose in the ranks of Randi's lackeys. It could have been worse, we could have gotten Cleo, eh Leo Casey instead. I do have a problem with his statement in praising Tom Pappas on his retirement. In the New York Teacher he said the following.

"I've learned more from this man in two years than from all the teachers in my life".

I personally see business as usual and I can only hope that I am wrong and that Michael Mulgrew, rather than being Randi Lite, brings strong leadership and allows for more direct elections for many of the positions that have been taken away from us over the years under Randi Weingarten's regime. Further, that he turns out to be a mensch and stands up to Chancellor Joel and Mayor Mike when it comes to teacher tenure and "due process" and not a wuss. Only time will tell.

I can however assure you that we won't have to see the disgusting image of Joel Klein giving Michael Mulgrew a kiss once a contract is signed. However, let's hope that Mr. Mulgrew doesn't forget himself and bend down to kiss the Chancellor's ass as seen Here. Good luck Mr. Mulgrew, and remember its your members first, something the union has seemed to forget lately.

Update: According to Gotham Schools, the DOE has quietly lifted the hiring freeze for "Teaching Fellows" assigned to District 75. That means 70 positions that should have gone to ATRs are going to "newbie teachers". What is so strange that the dropping of the hiring freeze occurred just as the City instituted a total hiring freeze. How can an agency disregard the City and hire new employees without consequences? Something stinks here.
Posted by Chaz at 2:31 PM

once again, a great article!

For a PEEK into what lies ahead with Mulgrew ask the rank and file at Grady High School in Brooklyn.

Your blog entry and the picture reminded me of a teacher's comment made years ago about the principal of the school we both worked in at the time:

"Mr. X only likes the teachers who kiss and lick his ass! The longer your tongue is, the better he likes you!"

I have to question your conclusion--if McCain's 90% record of voting with Bush made him "Bush lite," well, a 100% record would make him Bush.

So if Mulgrew had a 100% record of voting with Ms. Weingarten, what does that make him?

And that, as you rightly concluded, is about all we know about Mr. Mike.

Like always you are correct. I guess Nike Mulgrew really is Randi Weingarten dressed as a male.

Mulgrew is Randi but with a different style, which unfortunately has already fooled some people who ought to know better.

UFT exec bd is meeting tomorrow at 4pm to nominate him.

I was at the QUEST conference and when Randi mentioned again how she will now be able to devote 100% of her time to the AFT I thought she was going to introduce Mulgrew. He was sitting in the front row, but she said nothing of him. WHY??

We are creating a Mulgrew timeline for the 2016 elections and it's great to be able to go back and read posts like this. Wish there was a time machine, but what would that have done. We know what he was going to do, or not do.