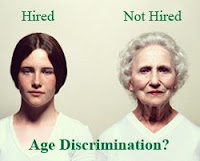 The regional DOE offices, known as the Integrated Service Centers (ISC) have decided that the reason the ATRs are not getting jobs is that they don't know how to interview with the Principals properly. Therefore, the Borough ISC offices have spent precious funds in organizing an "interview techniques class". The ISC, rather than face the obvious reason that the ATRs are not being hired by the Principals, they are blaming the ATRs instead. Pissed Off's friend described her frustration with the ISC and wrote about her experience with the ISC.

Of course the real reason that the ATRs are not being hired is quite simple. It is about age discrimination and the control the Principals want to have. Remember, if a Principal says "jump" the "newbie teacher"will say "how high"? While the senior teacher will rightly say "why?' It is really not about the money, it is about Principals not wanting senior teachers who might question their directives. This is especially true of the "Leadership Academy Principals. Previously, I wrote about the reasons why the Principals refused to hire the ATRs despite not costing their schools any more money than a "newbie teacher".

As for our union? Their collective heads are buried in the sand as they refuse to see the obvious age discrimination going on in the DOE. Previously, I posted the ageism that is going on in the Queens Teacher Reassignment Center (TRC). Furthermore, the UFT quietly dropped an age discrimination lawsuit at or about the time the union signed the unenforceable and DOE ignored November 16th 2008 ATR agreement. Despite union denials that there was any linkage between the two events, it certainly looks suspicious to the informed observer and was posted by me here.

In an earlier post I talked about a friend of mine who is an excellent teacher and her private tutoring services is highly rated and sought after by parents who's children need extra academic help. However, after her school restructured she found herself as an ATR and despite a sparkling reputation and glowing Administrator evaluations she has failed to land a classroom position. My friend has sent out 31 resumes and received not one response. Not one! Why won't Principals hire her? Well it could be that she is 50+ and has over 20 years experience. Nothing else can account for the lack of interest in this teacher.

Remember, the DOE's real mission is to get rid of senior teachers at all costs and if the students are collateral damage, so be it. It is consistent with Tweed's "education on the cheap" and "children last" programs. Unfortunately. our union seems quite happy to ignore the DOE's abuse of their senior teachers and allow the "ATR (1400+) and rubber room (800)" ranks to continually increase with older teachers, many of them 50 years of age or older.

Maybe with Michael Mulgrew as the new President of the UFT things will change. Yeah right. I'm more likely to see Leo Casey become an ICE member before the UFT does the right thing and go after Tweed for their ageism policies.

"Happy Independence Day"
Posted by Chaz at 11:01 AM

You're absolutely, positively (and even absotively, posolutely) correct, Chaz!

Which of the following agencies do you think would be most likely to take age discrimination complaints seriously if a large group of teachers descended upon the agency all at once?

a) NYC Commission on Human Rights

b) NYS Division of Human Rights

How can teachers organize and as the privious blogger suggests descend upon an agency to force an age discrimination class action?

oops. thanks for the corrections. As for which agency? We really need the teachers to organize a protest. The question is how can we do this without the union's assistance?


Make use of the following sites:

Thanks for the link. The ATRs need all the positive publicity they can get.

NONE of the above.

NYC Commission on Human Rights reports to Bloomberg and needs his permission to investigate another city agency.

NYSDHR or EEOC will only investigate the cases that have nothing to do with discrimination in real life, they only pursuit token cases. They are the first line of defense for Bloomberg and his like in various discrimination practices.

Class action law suit by teachers may force DOE to be more subtle in discriminating senior teachers. They will not truly change the way they deal with teachers.

I agree with anon &:30 that using the agencies listed above is really a waste of time. It will take a real effort of at least 1,000 teachers claiming age discrimination before something happens.

Don't expect "Unity" to do this. However, maybe ICE and TJC might be able to organize such a meeting that would get the media's interest.

Randi Weingarten had sworn an affidavit in 2005 for an EEOC complaint that had been filed by the UFT on behalf of a group of teachers.

Chaz, do you know anything about that particular complaint?

Was it dismissed or withdrawn?

Mulgrew will follow the same path as Weingarten, the path of NO RESISTANCE. I agree with Chaz if 500 to 1,000 teachers organize and hire legal defense, then the powers will have to react (UFT/DOE). They will then try to champion the cause, but, if such a coalition does organize and fight back, they should avoid the UFT at all cost. Of course bet that a new contract would then resolve this issue before it goes to the courts.

I was part of the UFT Age Discrimination Lawsuit that did not go anywhere. The EEOC went to a couple of the schools to investigate and found nothing wrong with the age discrimination complaint. Who can you trust nowadays? Nobody -- the whole system is corrupt.

My understanding was that the UFT withdrew the lawsuit at about the time the UFT & DOE negotiated the AT agreement.

I also did hear that the EEOC, under pressure from the City, did not follow through on the ageism issues.

Court litigation is only only place for teachers to be heard. Bloomberg can easily sway the decisions made by the heads of NYCCHR, NYSDHR and EEOC, but it will be much harder for him to do so with judges, especially juries.
The City and DoE will never allow any discrimination case against them to go in front of a jury, they will do everything they can to settle.
Hopefully there will be someone to organize a class action lawsuit against DOE.

i agree with your statement on the jury trial issue.

To all who comment on my blog. Please stay on topic. Thank you.

The Tower of AION said...

The Tower of AION


Aion is one of the most anticipated online games in 2009, http://www.rmt-wm.com/ NCsoft absorb of the "World

the three to start the war,Players can achieve large-scale "race vs race" . can become a Asmodians or Elyos,

wm.com/games/aion.html the official website of the public April 17, 2009internal testing operators June 5, 2009to

players hard time to fight coin.players through the reality of dollars to buy virtual coin to upgrade their level