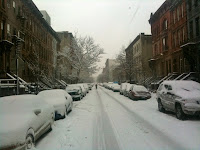 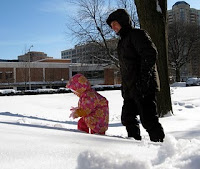 Mayor Bloomberg and Chancellor Klein opened schools despite many of the outer boroughs having streets that were unplowed and sidewalks that the children walk on being unshoveled. The result was the two clueless non-educators subjected the children to dangerous conditions by forcing many of them to walk in the streets or stay on the sidewalks with knee deep snow as they go to a school where they were put into an auditorium because the majority of teachers could not dig out their cars and took the day off.

Many parents had the common sense that the Mayor & Chancellor failed to exercise by keeping their children safely at home. Here again, not one of the newspapers or other media questioned the Mayor's moronic decision to endanger the lives of the children when many of the roads were still snow covered and treacherous. The real problem is that the idiot Mayor based his decision on two factors, money and the roads in Mdtown and Downtown Manhattan.

The money issue is obvious. Keeping the schools closed a second day would cost the City money from the State and the State money is necessary to pay the salaries of the non-educators running Tweed. The second factor was that the Mayor and Chancellor live and work in Manhattan and the streets around where they live and work are the first ones plowed and the sidewalks are cleared quickly. However, both the Mayor and Chancellor did not see what the outer boroughs looked liked. I was on Utopia Parkway at 7am in Queens and saw children going to Francis Lewis High School and Ryan Middle School walking on the snow covered and icy street as cars came perilously close to them. Other children chose to walk on the sidewalks but many homeowners had not shoveled since the snow did not end to midnight. These children were struggling to walk through knee deep snow. Their choice was dodging motor vehicles and getting hit by snow and ice in the spray or drudge through unshovled sidewalks. Did the Mayor or Chancellor care? Of course not.

Mayor Bloomberg and Joel Klein's decision was a threat to the children as they continue their "children last" program. By the way my blogger friend "pissed off" also questioned the Mayor's poor decision on closing the schools.
Posted by Chaz at 6:04 PM

Principal in Queens said...
This comment has been removed by the author.
7:24 PM

Bloomberg has no idea as to what the boroughs are like. Manhattan gets cleaned right away so they assume all the city gets cleaned up the same.

Good brief and this enter helped me alot in my college assignement. Thank you seeking your information.