The Phony Graduation Statistics Are Apparent In An Increase In Students Who Need To Take Remedial Courses In The City's Community Colleges. 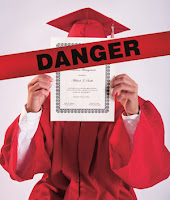 We now have even more evidence that many of our high school graduates are not ready for college as the percentage of high school graduates needing remedial course work has increased 3.2% to an astounding 74.4% and this would be even higher if CUNY used the national average of 45 passing rate on entrance exams in math rather than the "dumbed down" 30 used for determining if an entering student needs remedial course work. The New York Post, of all the media outlets reported on the disappointing numbers in an article that further puts to rest any real academic achievement during the failed Bloomberg/Klein Administration. In fact, shockingly, the New York Post Editorial Board actually blamed the New York State Education Department for "dumbing down" tests while giving the Mayor and the ex-Chancellor a free ride from the blame that allowed for this educational travesty.

This is just another result of how both the State and the City has cheapened academic achievement and are graduating students that are not capable to do college course work and even hold a white collar job. The failure of the City and State to provide a solid and well-rounded education for the students under their authority seems to be generally ignored by the majority of the media and should be called what I really think it is, a "junk education" .

Now as these students graduate and have graduated with suspect diplomas, due to phony credits and "dumbed down" tests what will happen to them in the real world? Furthermore, as these people become adults and have children themselves, will the next generation of students fall into the same trap of limited academic achievement and graduating with a diploma that is not worth the paper it is printed on? I hope not.

At one time New York State and City set the gold standard for educating their students now both the City and State Education Departments have lowered these standards to the point that both the New York State tests and the New York City High School diplomas are a joke. It is a real pity on how both the City and State has weakened academic achievement to the point that it really is "junk education".
Posted by Chaz at 7:15 PM

There may be more students who need remedial classes. However, some of the senior colleges like Brooklyn and Baruch have deiced to stop offering the remedial classes to do increased enrollment in this bad economy forcing more students to enroll in community colleges. Interestingly leaving me without a job this past this summer since I taught remedial classes at brooklyn for the past four years before that.

I wonder what the remediation rate would be if CUNY used the national average?

Standards are much higher today than they were when we went to school. Of course the graduation rate is going to be lower.

I don't remember credit recovery, home taught courses, or dumbed down Regents, and large amount of high school graduates taking remedial courses in college. I gue4ss my memory is getting faulty.

Standards are higher today?? What planet do you come from? Oh, your from planet Tweed, that explains everything.

Anon at 1151: Did you actually read Chaz's post? It was about remedial work for college students....