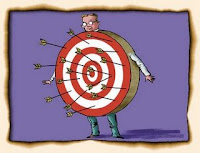 When I was a "newbie teacher" I must have broke up numerous fights between students in my High School. As you can figure out I was young and clueless of the consequences in breaking up student fights. At the time nobody informed me of the danger in intervening in a physical altercation between students. Not the Principal, not the Assistant Principal, or even the Chapter Leader. I just thought that it was part of the job as a teacher to breakup student fights. Luckily, I never was hurt nor did the students complain to the Administration that I used excessive force or touched them inappropriately. Of course that was then, when teachers were looked upon with respect. However, this is now.

As I became more experienced as a teacher and the Klein Administration took charge of the schools and teacher disrespect became the norm, we were told by the Chapter Leader that a teacher should never break up a fight because of the danger to the teacher. First, you can be injured yourself. These students, especially in high school are strong and in fighting the students become stronger as adrenalin flows through their bodies and if they accidentally hit you, it can not only hurt but can cause long-term and lasting damage to you. Just look at what happened to "newbie" Spanish teacher Lissindia Batista when she tried to break up a fight. Second, it only takes a student or his/her parent to accuse the teacher of using excessive force when trying to break up a fight. In some extreme cases female students can falsely claim that the teacher touched them inappropriately when the teacher unwisely intervened in the altercation. This is very true if the female student holds a grudge against a male teacher. It only takes a female student to claim that she was touched sexually to have the hapless male teacher arrested and fired. On the other hand teacher complaints of being sexually harassed by students and Administrators are routinely dismissed.

In other words teachers have a target on their back and the less they get involved in student altercations the better. What should you do if two of your students are fighting? Simple, yell "stop, stop right now" and call for help. If your location does not have a communication system then send a student to get school safety or to the Dean's office for help. Finally, both the DOE and union will tell you that if you get physically involved in a student fight and need medical attention, you may not be covered by the medical plans! Think twice when you want to break up a student fight.

Remember, "no good deed goes unpunished" when it comes to the DOE.
Posted by Chaz at 4:43 PM

I'm with you on this. When I see a fight, I walk in the opposite direction to look for a phone to call for help. If their is an AP nearby, I tell them to get involved.

I remember being told not to break up students' fights as far back as 1990 b/c it was not part of a teacher's duty. And yes they also said our medical plans might not cover us for injuries. May I add one more thing? I once had a cafeteria situation where one teen was severely beating another student. No student present would go to get help when I asked b/c they were afraid of being a snitch. I always follow PO's protocol and have for years!

Never break up a fight between a teacher and administrator. I got the teachers' back!

I agree with Anon 2:00 p.m. A fight between a teacher and adm. is the best fight especially when the teacher's winning.

Some teachers are known to verbally TKO administrators in less than 5 sentences.

Remember, those who can't teach (or fight) become administrators.

Those who can't do teach

What a stupid thing to say about administrators. You actually think there are no good administrators? How simple minded. It's also naive to think that you should NEVER step in to break a fight.

Don't break up a fight when you clearly could have and your looking at 3020-a charges.

OK: There is a difference between physically breaking up a fight (a poor idea given risk of injury, lack of backup, insurance flaws, and litigation) and calling/sending/going for help (a requirement). Oh and if there are any dingbats who think larger male teachers should breakup fights physically I have a friend who was put into the hospital (and workmen's comp/sick day issues)from breaking up a fight between female 9 year olds! He is just lucky he wasn't slapped with charges to boot!

Anon 8:58
I was just joking. There are some very good Administrators and some terrible ones as well as there are for teachers. However, you are dead wrong that you should physically break up a fight.

So you guys are saying that if my 8 year old daughter is being attacked by another child and is getting beat up unconscious with a window pole, YOU would not stop the fight? My friend, you guys should just quit teaching.

That is a different story. If a child is hitting another child with a weapon, of course you would try to disarm a child. However,in the more common cases of fists, and headlocks the DOE frowns on teachers physically getting involved. Your beef is with the DOE and not the teachers.

Anonymous said...
This comment has been removed by a blog administrator.
2:30 PM

What district are you in?

Yes, I follow P.O.'s protocol.
But plenty of administrators take the attitude that a boring lesson ("did not engage the students") triggered the fight.
Calling for help alerts administration to the misfortune of a fight in the room, in comes the administrator who writes up the lesson as causing the fight. This observation goes on the performance rating sheet.

No wonder in certain schools, in certain districts, the word is out in the school to document nothing and take whatever measures necessary to "handle things in your own classroom."

Back in the day, APs and principals did a bit of patrolling the hallways, and show a bit more collegiality to their teacher subordinates. These days they are too busy writing political letters in the file and crunching the test numbers to lend a supportive hand in helping with the discipline issue.
Again, follow PO's advice, for you can get a miscarriage or a charge of having a mis-placed hand.

..Not the anonymous earlier this page,
But undercover blogger.

Good point but you went over the top when you said that medical plans would not cover you. If the City decides to bring you up on charges they will not pay for your expenses (teachers are not covered by Workers Comp)but your own insurance will cover medical bills. Fortunately my medical insurance doesn't look to fault when I go to the doctor or hospital (not yet anyway).

Hi everyone! I'm from London but am living in Berlin at the moment.
Gotta like this site!

So two fights have happened at my local school. One where i got in the middle and prevented both students from killing each other. Second a student hit another 3 times in a row. 3rd time he got fed up and i was just holding him from hurting himself or the other student. Another p.e. teacher came down and held him down (full hold) and were trying to calm him down. Words dont work. Not im on paid leave. Any suggestions?