Bloomberg's Budget Will Eliminate 6,100 Teachers (4,100 By Layoff) While Proposing No Layoffs At Tweed In The Mayor's "Children Last" Policy. 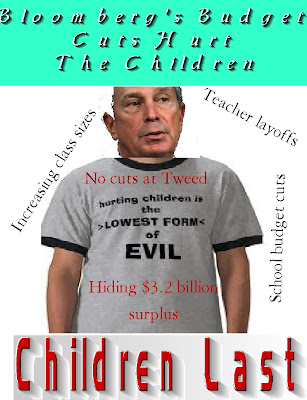 Mayor Bloomberg presented his budget yesterday and in it it eliminated 6,100 teachers for the next school year. The only real change was that the Administration admitted there would be 2,000 teachers leaving due to attrition, not the 1,500 as was in the previous budget proposal. It is very obvious to all that he is targeting teachers in this budget as a political statement. By contrast, when he was asked if there will be any layoffs at the DOE's already bloated Central Administration? The Mayor responded, that he does not anticipate laying off anybody from Tweed.

Here is a Mayor that preached "Accountability" and who does he blame for his budget to layoff teachers? The Federal & State governments, the Teachers union, and of course, the economy. Nowhere does the "Accountability" Mayor takes blame for his budget decisions. An example of this is the 3.2 billion dollar surplus that he quietly tucked away into the 2013 budget (even the New York Post caught on to this three-card Monte game, Mayoral style) rather than using the $276 million he would need to avert any teacher layoffs. This is simply a political statement by the Mayor to embarrass the State and to demonize teachers and will, in the long run, fail as the politicians (except for the Republican Senate) see that the lame duck Mayor is no longer popular with the people and his legacy as the "Education Mayor" as a bad joke. What is more interesting is that the teacher layoffs account for 80% of the total layoffs in Bloomberg's Budget of City Workers and to show how political it is, he said any additional money he gets from the State may go to the Police or Fire Department not to reduce teacher layoffs. His exact words were:

“Any moneys that Albany manages to get back to us…don’t automatically go to education,” Bloomberg said today.

“There are a lot of first priorities. There are a lot of agencies that are very important to the city. You may decide that you need one more policeman or one more fireman… there are plenty of things in addition to education,” he said.


Of course the Mayor's poodle, Chancellor Dennis Walcott supports the Mayor and brought up LIFO yet again. He said the following:

"the issue for me is making sure we have an effective teacher in front of the classroom." The administration is pursuing legislative changes in Albany that would allow the city to lay off teachers based on merit, instead of seniority as the law currently requires.

What the Bloomberg budget does is "hurt the children". Especially the elementary schools where 50% of the teacher layoffs are projected. However, the Mayor has made it clear in his budget proposal that he does not care about the children and how his draconian cuts will affect them. He only cares about proving a point and use his Mayoral power to make it happen. To him it does not matter that the schools who struggle in poor neighborhoods will be disproportionately affected. To the Mayor it is not about what is right, it is about his power to do as he pleases. I can only hope that the New York City Council sees through what Bloomberg is doing and take the $276 million out of his 3.2 billion dollar surplus and stop this travesty that furthers the Mayor's ambitions which result in "hurting the children".

The Bloomberg budget not only is a disgrace but goes out of his way to "hurt the children" in his political attack on teachers and their union. "Children Last" does not even apply here, it is "children do not count" in the Bloomberg budget. I know what our union's position is

Michael Mulgrew, the union president, described the mayor’s announcement on Friday as the “smoke and mirrors” of an administration trying to save face after threatening layoffs for months. “The teachers have been hearing this since January,” Mr. Mulgrew said.

Notice those fifth columnists at Education 4 Excellence had nothing to say about the Bloomberg Budget that "hurts the children". I wonder why?
Posted by Chaz at 8:21 AM

This is a wakeup call to every teacher in NYC schools. There will be teacher layoffs every year.

The outsourcing of teachers is right at the doorstep of every classroom in New York. Teaching staff will be steadily replaced by computers and internet web instruction services which are contracted out to a few connected private companies that produce the hardwares overseas and even service the website from foreign countries. One senior teacher's salary is more enough to pay for 3 or 4 consultants stationed overseas who will further replace 3 o 4 classroom teachers in US.

It is exacly what they did in GE, and many other private companies, outsourcing and relentless outsourcing.

Please tell me that I am wrong on this!

Joel Klein is currently working on a web intruction site called K-12 that is associated with Newscorp. The bunch of crooks will get filthy rich on this scheme, and they all know it.

The 3.2 billion dollar surplus has been shifted to the budget the year after next. This is in addition to all the money they wasted on failed technology, crooked consultants, and allowing the DOE to maintain their bloated bureaucracy.

So true about the outsourcing...a friend of mine had a brief conversation with one of her principals recently. The principal was chatting about his kindle, and then casually mentioned , with a smile on his face, that we're coming into the age of "the e-teacher"...It will be automated as much as possible, and it's the Wicked Queen's mission to get it done right here in NYC. If they can break it all apart right here in NYC...the battle is won...This is Ground Zero in the school deform movement. It means countless millions and billions of dollars in profits forever and ever...Not only here in the USA, but all over the world. Didn't Klein buy a company that provides math instruction transmitted over cell phones? The plan is to teach kids in Africa, etc. math, on their cell phones and puters...

I would outsource to computers also. You teachers complain to much.

I guess you really do not care about the children since 50% of the cuts come from the elementary schools.

You may not like teachers but this is about overcrowded classrooms, lack of resources, and failed programs. However, we complain too much. Wonderful analysis. You would make a great manager at Tweed.

This isn't the final word on layofs...just part of the game Blunderberg is playing with us.

Can you provide the analysis that shows that students test scores will drop when the students per classeroom goes from 22-24 to 26-28?

That is just one example that class size matters.