The Education Degree Programs Don't Teach This In The Classroom. It Takes An Experienced Teacher To Do What Is Right For Everybody Involved. 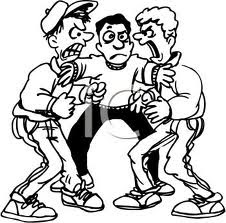 Many of my readers already know that I am an ATR at a wonderful high school with a good Administrative staff. However, as an ATR I find myself substituting for various teachers who are out for the day and feel, at times, I am not contributing to the school's success since I do not have classes of my own. Sure, I am dependable, tutor struggling students, the Administration trusts me to do whatever job they give me, and many of the students respond to me but it is still not like having your own students. However, something happened last week that somewhat changed how I felt about my contribution to the educational success of the school.

I was overseeing a class of 32 students, who, for the most part, was doing their assignment, so I settled down to take attendance. Suddenly, out of the corner of my eye I saw a student jump up from his seat and run across the room to confront a fellow student who apparently hit him with a spitball. The two students stood up and were nose-to-nose and chest-to-chest (no personal space here) and I realized I had an extremely volatile situation that was seconds from exploding into a fist fight. I instinctively took action to try to defuse the already dangerous situation. I first had a passing teacher call down to "school safety" to get assistance and then moved toward the two students as I encouraged the other students to back away from the inevitable fight. I screamed at the two students to "stop, stop this at once". I repeated this three times as I continued to make my way toward the two potential combatants. When I reached them I instructed them to "stop, and get back into your seats". I quickly realized that neither one was backing down so I did what I thought was best for the safety of the class, me, and the two students. I put my hands on each of them, just below the shoulders and tried to push each one back slowly and gently away from each other without me being caught between them (more like a triangle). At first, neither one budged and I thought this is real bad but I then said in a stern but caring voice the following "fighting each other will only result in both of you getting arrested and suspended for the rest of the school year". That did the trick, both students started to respond to my gentle push and started to slowly move away from each other. As the distance between the two students increased and they could no longer reach each other, I only then stepped between them to further defuse the situation. By the time school safety and the Deans came the altercation was over and both students were returning to their seats. Both boys (17-18 year olds) were sent to mediation to work it out. It seems that they were once friends and had a falling out that festered for some time, only to explode in my classroom. Lucky me.

Did I do the right thing? I think so. My experience in the classroom allowed me to instinctively protect the students in the classroom while defusing the fight and stopping two students from potentially destroying their chances to graduate on time, if at all. Furthermore, I realized that I could not step between them for fear of getting hurt and not be covered because, according to the DOE and UFT, I exceeded my duty in putting myself in danger. Therefore, I did what you are never taught in education courses, that is how to protect the students under your control while not causes injury to yourself. Only my experience as a classroom teacher allowed me to instinctively defuse a potentially dangerous situation into a simple mediation session

Mayor Bloomberg, this is just another example why teacher experience counts!
Posted by Chaz at 3:21 PM

I was confronted by a fight between two boys in a cafeteria. Of course the fight almost created mayhem among the 300 plus students eating at the time. I was the teacher in charge, and the thought of a mass fight scared me. As both an educator and parent I did what you did (just instinct).
Reviewing the tape later, School Safety said I was "Daisy Dukes" since I slid over a table to get to the boys, and I was able to stop them.
By the way, I was 56 at the time, and it didn't occur to me that I would be injured..I just tried to control the situation, and keep the boys from hurting themselves and others. That's what an experienced adult will do to diffuse a dangerous situation between two young boys.
Since I had already established control over the cafeteria all year, the 300 plus students followed my direction to "stand down."

Chaz, you are my hero!

My suggestion is when you are talking about experience as a teacher counting stick to education not referring. This article and your point is a bunch of BS. You ability to defuse the situation has nothing to do with teaching experience. If you are that worried about fights, schools should provide training sessions to all teachers on how to handle these situations.

Anon 4:35 you are also my hero. Jumping over tables at 56 is so cool. I hope my child has you as a teacher because you are obviously qualified to teach.

Experience as a public school teacher comes in many forms. This is not college, where you instruct a class with no outside interference.

I can tell you are not a teacher and you just don't understand that what you ask will never happen.

For the DOE it is not about the children but how to get the teacher.

Proud to be a Teacher said...

What makes you think Bloomberg cares whether or not the kids fought or that an "experienced" teacher defused the situation? While I congratulate you on a job well done the sad reality is that no one at Tweed, City Hall or anywhere else except the students, their families and the staff at your school give a shit. Don't expect these corporate assholes to care about you or the students. You are teaching because you can and want to make a difference. Bloomberg and the other can go to hell.

Why do all you teachers think everyone has to kiss you asses? You are not making some great sacrifice.

I chose my job and you chose yours. Live with the good and bad just like the rest of us do. Stop thinking that the mayor and the public have spend all day thanking you for some sacrifice you are making. You want to be a teacher, it is not a punishment. Get our yourself or switch jobs if it is that bad and you are that abused.