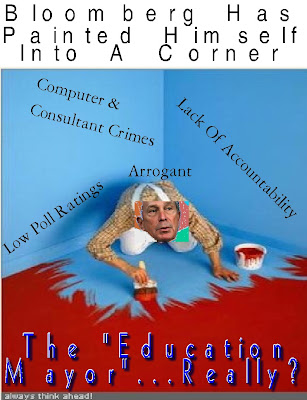 The latest poll numbers show that Mayor Bloomberg's self-proclaimed legacy as the "Education Mayor" is shown to be fraudulent. Not only does he have only a 40% approval rating as Mayor, his education numbers approach what the unqualified ex-Chancellor, Cathie Black had and that is bad, really bad.

For example 64% of the general public give his management of the schools a "thumbs down". More importantly, 78% of the parents with children in the schools disapprove of the way the Mayor has handled the schools. Only a measly 20% approve of his education policy. Worse, is that 57% of the people believe Mayoral Control of the schools has failed. Instead of refocusing on what made him successful earlier in his tenure, he has now painted himself in the corner demanding teacher layoffs while ignoring the Administrative problems in his third term that have outraged just about everybody in the political spectrum. The New York Post's Michael Goodwin has jumped on the Mayor for his failures, especially in the area of Education in today's edition. Even calling Bloomberg's claim about being "the education Mayor" a fraud. This is not the first time Michael Goodwin has questioned the Mayor's priorities and his attitude.

The Mayor keeps on threatening to eliminate 6,100 teachers or 8% of the teaching staff. By contrast, Nassau and Suffolk County schools have only threatened to eliminate 1,200 teachers or 3.5% of the teaching positions in the two counties. If we are to use the Long Island number of 3.5%, it would just about equal the amount of teachers leaving the New York City School System due to "attrition" at year's end. Since the Mayor arrogantly refuses to eliminate Administration it will be left to the City Council whom will ignore the Mayor's budget proposal and eliminate any serious teacher layoffs while reducing the computer and consultant services, especially at the bloated Central Administration at the DOE.

To me, the Mayor has truly painted himself into a corner with his arrogance, and imperious actions and only a miracle can save his legacy and I don't believe in miracles even for a billionaire like Bloomberg. He can't buy a miricle or can he?
Posted by Chaz at 4:50 PM

Bloomberg is a crook and a bully. Hopefully checks and balances will be restored somewhere, since I have not detected any at any level of government. His way of thinking is shared by Cuomo, apparently. The state legislature, which voted to give him control over NYC public education, should be taking that power away as we speak. Instead, the double dealing continues with Cuomo and unfortunately the DINO president.

It is well said that Bloomberg is a crook and a bully, furthermore I would say he has some serious issues with women in general. Look at his past legal entanglement of harassment and discrimination complaints with more than 50 women whom he paid to settle with, and current legal cases which more than 70 women brought against Bloomberg LP, and his long standing and on-going negative attitude towards teachers of whom more than 80 percents are women.

Good job Chaz in you're Bloomberg bashing posts. It is good that you keep the pressure on.

Prince Michael has to cutback on the consultants. These dubiously useful people could have their jobs eliminated, and hundreds if not thousands of teacher jobs could be spared. I posted about Comptroller John Liu's damning (rightly) audit of the consultant fiasco in Cutback Consultants, Save NYC Teacher Jobs.