ATR Meetings Scheduled This Week. Please Go And Express Your Disappointment And Disapproval On The Union's Inaction Dealing With The ATR Crises. 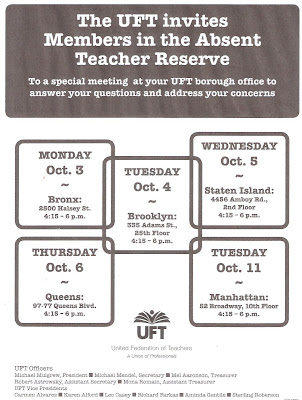 This week, starting today, in the Bronx, the UFT will be hosting a question and answer informational sessions with the almost 2,000 ATRs in the system. Realistically, the union set up these meetings to forestall any independent effort to bring the ATR travesty to the public's attention. Presently, the UFT inaction has embarrassed their members and alienated the ATRs that they are supposed to represent. While, I cannot tell you the union's actual agenda, you can bet they will say that the new ATR agreement was a win for the union and the ATRs since principals must place ATRs in vacant or long-term leave positions. Further, the union will proudly announce that no ATRs can be laid off. Finally, look for them to tell you how they saved the ATRs jobs by defeating Mayor Bloomberg's LIFO bill in Albany. Of course, the truth is very different. First, the ATR Agreement is an unenforceable farce and principals are still hiring "newbie teachers" to fill their vacancies and long term leave replacements. Even the New York City Comptroller's Office question the DOE about allowing principals to hire "newbie teachers" while more experienced ATRs were available. Second, under New York State Law, only the newest teachers with the least seniority ("newbies") could be laid off, not the ATRs. Finally, all New York State unions opposed Mayor Bloomberg's LIFO bill since it was an end around "collective bargaining" and would affect all unions down the road.

What should the ATRs be asking the union at these question and answer sessions? That is up to you but here is what I will be asking.
The GEM-ATR committee has issued a list of demands and you can find it on the NYC ATR blog. I agree with almost all of them as it states out the issues and resolutions that our union should be implementing and demanding from the DOE.

ATRs are "quality teachers" and using them as day-to-day subs are just a waste of talent.
Posted by Chaz at 4:02 PM

We hired day to day subs today! Really pisses me off. How many ATR's did my boss give a shot? ZERO!

First, the UFT agreed to this so for them to claim age discrimination implicates themselves. You need to be real.
Second, not all ATR's are created equal. Many deserve to be in this boat and are lucky they have not been fired. Others are not.
The trick is how do you tell the difference? I do not have the answer; but neither do you. I think your constant negativity is not helpful.
Third, some of us (such as I) have managed to work the system and get placed. Maybe not enough of us, but there are some. You do not even appear willing to acknowledge that.

I am glad that you are the few who received a placement. My questions to you is how old are you and how many years have you been in the system?

Chaz has previously acknowledged that some ATRs are not very good (see his "bad teachers" articles) and others have received offers but almost all the senior teachers have not. As for the age discrimination issue, you might be right, but there is no harm in making the ageism issue public.

ATRs are ATRs for a reason. They are lower quality teachers.

these posts are proof that our union is not united. too much division. we need to be all for one and one for all. the putting atrs down just enhances the city's position. atrs are not bad teachers. how did you get placed anonymous? i sure as heck have tried for a year now. instead of ripping atrs, why don't you tell us your secrets. who knows, maybe you are the mayor or are dating his daughter. i don't know

Your statement proves that you have no clue as to how someone ends up in the ATR pool. I ended up there 2 years ago because I (and the 3 other reading teachers in my building) did a job TOO well - all our students "passed" the ELA, so the City decided that the building no longer "needed" a reading program and pulled the funding. Ta-dah! Four quality teachers dumped into the ATR (two at top scale with 20yrs, another with about 18 years and me with my 14yr total).

All because the kids passed the test. How does that show "lower quality"?

And I did manage to get placed this year, but keep up on ATR issues and am actively involved with the ATR committee regardless. Why? Because I KNOW that I could easily end up in the ATR again at the end of this year, or next. Or whenever.

Low quality teachers? Are you kidding? I am a great teacher and wound up in this hell because the principal was allowed to change my course codes and hire a buddy! Don't let me start!

You are correct, I do seem to write negative articles. However, when I see the DOE practice "children last" policies and watch as our union rolls over and plays dead with their unenforceable agreements, I should write about wonderful thing? Sorry, that is not my style.

I also would like to point out that because of a "false accusation" by a student and an overzealous Principal I spent 4.5 years out of the classroom. Why so long? Because the DOE's Office of Legal Services knew they had no case and was hoping that some miracle would appear and justify my removal from the classroom. Therefore, they found excuse after excuse to leave me rubberized and the union did nothing to help.

The Arbitrator rightly found no misconduct, only an inappropriate comment (which I still insist was not inappropriate) and you want to know why I am negative?

Your ignorance about ATRs is pitiful.

the meeting was tepid. yippee they saved our jobs! will principals be forced to hire us now that it''s week to week? don't know? how many vacancies are there? how many atrs? don't know...huh? subbing does suck...really does the uft ever sit in on a class? nope! they did this for us? BS! Atr's are stick between the DOE and the UFT...a bargaining chip, a number a cog in the wheel. More like we're on a precipice.

Subbing isn't the worst humiliation. Sending us to different schools every week is an abomination!

Was there any mention on when we will find our placements for next week? I hate the obligatory UFT patting themselves on the back and giving us the redundant 'we're looking into this, we're not sure, we'll get back to you' same old same old.

As far as I am concerned, the UFT and DOE do not care about us being an 'active member of the school community' by moving us week to week. That's fine! neither do I. I will go week to week, hide where/when I can and do the bare minimum each and every day.

Placements will be sent on Thursday..what a terrible situation! For those of us with second jobs, child care issues etc. this is a nightmare! Maybe the 2000 of us should band together to stop this madness...who voted on this agreement??? We were sold down the river,,,,,,,,,,,,,,,

To Veteran Teacher: an email went out tonight, Tuesday, informing us of the impending Thursday weekly notice. If anyone wants to get active and get noisy for media attention reply here. Otherwise...be cool out there and don't get caught in a corporal punishment situation when subbing with kids who like to act out. And yes anon: it's an abomination!

In 2005 the UFT filed an Age Discrimination Lawsuit that did not GO ANYWHERE. Everything was a PRETENSE and a big mockery from the UFT. We have so many teachers from 2005 that never get an appointed job.

The age discrimination thing does not hold much water b/c there are ATRs who are in their 30's(like me). The problem is we all make too much money and that the principals have their budgets and the right to say we are not a 'good fit' for their school.

hey, if they want us to be subs, fine by me, don't hold me responsible for anything and don't give me any grief and stay out of my way!

What a waste of a meeting. Propaganda!

We ATRs must organize. That is why I joined he GEM-ATR committee. We need a voice which our union does not care to give us.

Anonymous said...
This comment has been removed by a blog administrator.
5:55 PM

Anonymous said...
This comment has been removed by a blog administrator.
7:45 PM

I have 6 years in. Im an ATR. My school I was at needed to hire me, but they didnt have the money. shame..Now there will be a new ATR next week, and I will be going to a new school. This is ridiculous. Its so obvious the city wants the ATRS to retire....IM IN MY 6TH YEAR!!!! Im not going anywhere. I hope not to be an ATR for years and years, but nothing looks promising for us.

You should know that the UFT did back an age discrimination law suit a few years ago. The problem was that they did not properly vet their primary complainant who I had worked with A very intelligent and legally knowledgable woman who could no longer function in a class room. Furniture was damaged, holes in walls where a "student had thrown a desk at another student and missed ONCE", broken VCRs, stolen equipment, paying students money before observation days, showing colleagues her scars from breast reduction, etc. And she claimed all she needed was to stall them 2 years until she could get full retirement benefits and that she was happy to be reassigned.