Mayor Bloomberg Offers Only "Tricks" And No "Treats" To The New York City Schools This Halloween. 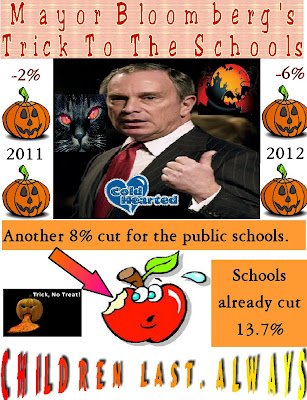 Here we are, Halloween 2011, and Mayor Bloomberg has presented the New York City Public Schools with more "tricks" in the form of budget cuts. Bringing the total cuts to the schools averaging 21.7% by the start of the 2011-12 school year. The Mayor once thought that he would go down as the "Education Mayor". However, even he now realizes that his so-called advances in student academic progress was all "smoke and mirrors". Now it seems he wants to starve the New York City Public Schools of resources, especially for the classroom and find ways to cut staff by any means possible.

Let's list some of the devastating changes in the last few years in the schools since the Mayor has taken charge of the schools.

Yes, this is the same Mayor who was quoted as saying "teaching experience does not count". Now he has made his pet poodle, the Chancellor of the New York City Public Schools who on the Mayor's orders will shit on the schools. With this Mayor it is "children last". Always.
Posted by Chaz at 4:26 PM

It's kind of amazing they can claim to put "Children First, Always," and cut their resources on such a regular basis. One of the things Bloomberg had to do to get mayoral control was to renounce Giuliani's practice of cutting city aid by precisely whatever state aid would raise it. Who would imagine his fix of constant reductions no matter what, especially with his audacious claims about being an education mayor.

History will judge him, but NYC can't really afford to wait until then.

He needs to be impeached before his and his cronies do anymore damage..

Dictators and strongmen have fallen all over the world this year - but not here in the US. Bloomberg remains squarely in office and in power. Cuomo rides at 65% approval despite his complete sellout of the 99%. And Obama - the guy who has decided teacher evaluations tied to test scores, unlimited charter school expansion, merit pay and firing 10% of the teaching workforce every year is the only way to improve public education - is still going (if not strong, he's stronger than the GOP opposition.)

Expect worse to come in the short term from these dictators, unless Arab Spring rises up from its birthplace down in Zucotti Park and washes the corporatists away with the dog shit and the street garbage.

There's a march tomorrow to help that aslong, for anyone not teaching five periods: