My Interview With Students "Alex and Andrea" In a Class That Has No Teacher But Is Not Listed As A "Vacancy". 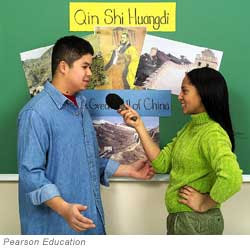 I found myself covering a group of classes that has not had a stable teacher since school started. What is bad is that this class ends with a Regents in June and the students are starting to realize that time is running out on them. They complained to me that they have rotating teachers, probably ATRs, and two of the classes have subject teachers who are given coverages and don't seem to care about them. What is worse is that this class and the others in the group are not considered a vacancy according to the school!

I sat down with two students "Alex & Andrea", not their real names, and asked them how they felt about the situation of having no stable teacher for their classes. Alex spoke first and said that when the school year started the Principal came in and told the class that the teacher who will be guiding you will be leaving the school in October (probably an ATR) and I am hiring a teacher who will be the permanent teacher for the year. During October the teacher disappeared and we were given teachers weekly (definitely ATRs). During this time four people were brought into our class to do a demonstration lesson. The first was a middle aged man who really knew how to teach, he got us involved in the lesson and the class really liked him but alas, he never came back. The next two were women and both did not connect with us. The class found both women boring and they also never came back. The final teacher was a young man who did a poor job with the class. He tried to get us to participate and we would have if we understood what he was talking about. He spoke above us and his demonstration was the poorest of the four. However, we were desperate for a teacher and were happy when rumors spread that they hired the teacher. Unfortunately, he also never came back. Someone said the Principal could not hire him. My guess either he was not certified or the Principal could not get the DOE to waive the hiring freeze.

At this point "Andrea" spoke and said that her mother came to the school to talk to the Principal about her daughter's class not having a teacher. The Principal assured Andrea's mother that the class has certified teachers giving instruction and that the school was working on assigning a teacher permanently to the class. Andrea told her mother that the Principal is lying. that most of the teachers require them to read a few pages and do the questions. The teachers offer no actual instruction. Their homework is never collected and some teachers give them dittos that have little academic merit. She also said that they have not had even one test yet! She seemed very upset as she told me her story and wanted to know who should her mother talk to since talking to the Principal is not the answer. My response was that she should email and call the Chancellor and ask him what is being done for her daughter's class?

Let's hope that "Alex and Andrea" actually gets a teacher and all other "Alexs and Andreas" who are student victims of principals who refuse to fill their vacancies. Shame on these principals and shame on the DOE and UFT for knowing about these secret vacancies and not acting to correct the problem.

Children first. Always is just a sick joke.
Posted by Chaz at 6:42 PM

It's very sad that this story is replicated all over the city. The new program actually gives principals financial incentives to pull nonsense like this.

No one cares about the kids. They are a generation being thrown away, being trained to answer phones, make copies and do the dirty work of big business.

Did you report this to the UFT?

"Did you report this to the UFT?"

Hah, hah, hah, hah!
They'll say, 'We'll be on it." And then, they'll stick their notes in the circular file.

Are you serious? What drug are you on? The UFT is part of the problem.

Don't you think that the Chapter Leader already reported this? Further, have you not read the blogs, especially NYC-ATR, UFTICE, Ednotes, and the Traveling ATR about the hidden vacancies? What has the union done about this? Absoulutly nothing!

The question is why hasen't the UFT not made this an issue and you want to know why it was not reported to the UFT by chaz.

They get double pensions...and the UFT get the same union dues from newbies as they get from veteran teachers...so why should they sweat it...? Actually..the more 2 for 1 newbie deals the better...they'll get even MORE dues when the vets get fired or retire...Until we MARCH ON THEIR F'N OFFICES AND SCREW WITH THEM THEY WON'T EVER CHANGE THEIR ACT !!!

I don't understand why the UFT does not go to the press with this travesty and embarrass the DOE's claim of children first. It really is puzzling to me.

Why is everyone so confused and puzelled about the uft not doing something to help the hapless underclass atr's.

The reason is that they created this mess in concert with the pinstriped thugs at the doe. The intent is obvious.

Get rid of all those dinosaurs with an institutional memory. That way, both sides of the criminal racket see returns. Both the pimps over at the uft and the city will get two dues payers for the price of one.

The city will not have to pay the shitty pittance of a full pension, the old teachers will also leave on their own acccord. They will then be off payroll

The methodology is transparent, painfully so.
This is age discrimination, constructive discharge, violation of constitutitional rights such as the 14th ammendment. This is the meaning of disparate treatment.

All of you can become a roving teacher at anytime. Think of that when the slime bags from the uft try to sell you the next contract.

People talk as though the uft was had by the little tyrant. No, the uft willingly spread for him. The atrs a just a pawn in a long series of sacrifices that the uft made under the guise of a better contract.

As long as those parasites get their cut from selling out the members rightrs. Everything is just peachy keen.
We, the hosts, will continue to let these ticks feast on our blood willingly, like sheep.

The main problem is that these uft ticks are giving us a disease lick lime disease, that will prove fatal to our careers.

So, you didn't report it to the UFT?

What is the school? Did I miss it in here. Come out and say where this is occurring.

I'm an atr from a "failing" school, age 38. I can't retire with 15 years in....what will I do? Manage a CVS?
One of my assignments as an ATR was Franklin K. Lane. That school is at the end of the road with 150 students on register and 40 students that show. I sat in a teacher lounge for a week, not one coverage. The school has 10 staff members left. I thought ATR's were being sent to thriving schools with the hopes of being interviewed by principals for potential jobs!!!! HA, ha, ha! A co-worker (now ATR) was just given that assignment. She will sit in the same lounge for 5 days!
Should I buy a tshirt at each school location weekly? This way I can have a collection of all the high schools I toured on this road to nowhere!!!!!!!!

Btw, why isn't there a UFT ATR representative?????? The UFT can create a new position just for us.

I was wondering what happened to "Unity Hack"? Well your back!

The CL did report it and your union masters did nothing about it. hat else is new?

Don't you guys understand that the city does not care about the kids? They really don't. Most principals are only nice to the kids who make them look good and do not care about the rank and file. This is going on all over the city. I am a Social Studies teacher and was doing a SS vacancy in Sept, then I was moved. I have met numerous people who this has happened to. It bothered me so much in September and made me nuts, but now I just do not care. Yeah, being an ATR does kind of stink and if you are 24 and let it bother you, it is demoralizing. But you know what would be more demoralizing? Not getting paid!

The worse part/best part depending on how you see it is that is all very transparent now. I am a teacher who worked for 13 years and am now subbing per diem because I know I will never be picked up again as a full time teacher in this set up. I have gotten CALLS from SUBCENTRAL for sub jobs in Manhattan every day since DAY 1 of this school year. EVERY SINGLE DAY I HAVE BEEN CALLED. One of the more established schools called me and said we do not call subs until October. I said, of course, that was the rule under the old regime. Now no one is minding the store. To top it all off, I get calls that begin THIS IS A VACANCY. Now how's that for the DOE to laugh at the UFT. They publicly acknowledge they have vacancies and use per diems to fill them. The saddest part is that NO ONE CARES.

So Chaz. You didn't report it! Shame on you, I guess you really didn't feel that bad about "Alex and Andrea." Not worth a phone call from you? Or would it ruin your story?

The shame goes to your union "masters" who have heard similar stories throughout the City and have done nothing about it.

If you could read, which is not a requirement to be a "Unity Hack", I did say the Chapter Leader did report it.

By the way, I know who you are and you haven't been in the classroom for six years since taking your union position.