Droopy Pants And Poor Academic Achievement In Male Students Seem To Have A Correlation, So I Have Observed. 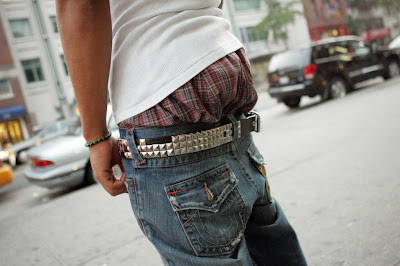 In my travels as an ATR I have been in eight high schools and observed each school's culture. Being in the classroom and after speaking to many Deans and teachers there seems to be a correlation between how low male students keep their pants and the grades they receive.

Apologists will tell you that it is simply prejudice by teachers who give these boys low grades because they wear these droopy pants with their underwear showing. The reality is that many of these boys show disrespect to school staff and their peers and the droopy pants are simply an expression of that disrespect for others. Even some community leaders have expressed disgust of this prison-inspired dress. A few schools I have been in tolerate the droopy pants look and their tolerance of this dress and thuggish behavior is reflected in the school's poor grades and terrible academic performance. By contrast the better schools with good academic performance have very few male students that wear droopy pants and the few who do are told to pull up their pants. In the high-achieving specialized school I was at not one male student wore droopy pants!

The Deans tell me that the boys who wear their pants so low that their underwear show all the time are also the students must likely to "dropout" or need massive "credit recovery" to graduate. The CTT teachers echo this and add that these boys tend to sit in the back of the room, away from the teacher and instruction, and have to be reminded repeatedly to take off their hats and hoods. The same teachers say when they try to reach out to these students it is "like pulling teeth" to get them to participate in any academic activity and quite a few simply go to sleep. By contrast the honor classes in the same schools have no male students wearing droopy pants and are actually embarrassed when a fellow classmate points out that their low-riding pants are so low that the top of their underwear is showing (I saw it myself twice).

Yes, I know the apologists will claim that teenagers should express themselves and that teenagers are naturally rebellious. However, droopy pants are more than simply an expression of being a teenager. In this case, the male student's droopy pants is associated with disrespect of school staff, fellow students, and is correlated with poor academic achievement.

Think what you like but "the truth is the truth" that male students who wear these droopy paints with their underwear showing, are associated with poor academic achievement and schools that tolerate this type of dress are destined to continue to fail the students academically.
Posted by Chaz at 4:01 PM

I have observed exactly the same in the eight schools I have visited this year.

Amen to this post. If they show their ass, they will not pass.

You have hit the nail on the head!

The appeal of drooping pants is related to street thuggery, and the rise of the gang image. There is, as Chaz points out, a definate correlation between drooping pants and low grades. This is the street look, and more likely than not, the father, should he be around, is probably wearing pants in the same disgusting manner. Why don't the mothers of these kids say anything before they leave for school? Is this a "cool" thing. I think not. It's for pussies.

It goes without saying that this behavior starts at home. However, it is no excuse for school administrators to look the other way and allow this so called students to look at act the way they do,

We all know the look started at Rikers and other prisons when inmates couldn't wear belts. On the street it says, I'm a baby with my pants falling down plus a narcissistic Calvin Klein type cultural moment combined with a weak father and we get big confused babies walking around pretending to be thugs when they should be getting help. We should probably blame teachers...lol

If I would wear my pants this way wouldn't I be sent to the rubber room for indecent exposure???

Chaz, another bullseye article about a major problem in the schools that the politically correct crowd and the education reformers refuse to open their eyes to.

This is why covering as an ATR in elementary schools is a blessing.

NO droppy pants. The administrators have zero tolerance.

Before this year I had too many unpleasant experiences see those pants fall
--in the older kid schools of course.

on the subject of baggy pants. You might like the above clip. I somehow find it hard to envision a sag pants academic.

Most teens today only care on how to be cool and forget to include studies in their priorities. They will surely have a hard time coping up with things and will struggle in the process. But I don’t believe that all male students that have droopy pants also have a poor academic performance. I say this because no matter how you look like whether you are cool or not as long as you are disciplined you will not fail in class.

Hello. Just found your site. Hang in there. I am working in one of the few large schools still left and we know Bloomberg is after us. I fully expect to be on the next list of schools to close, even though we, too, hope to outlast Bloomberg. I am disgusted having to see the butt of these boys every day. I tell them "If I did not diaper you, I don't want to see your butt!" but they are thugs who don't care. How can their Mom let them leave the house like that I, too, ask myself. It is disgusting. Our Union better never sell out ATRs. Teaching in NYC is like a war every day, and we have to deal with Bloomberg hating us, too. I literally forbid my son from becoming a teacher! I am fed up.