The Chancellor Data Report Shows That Dennis Walcott Gets A Zero. 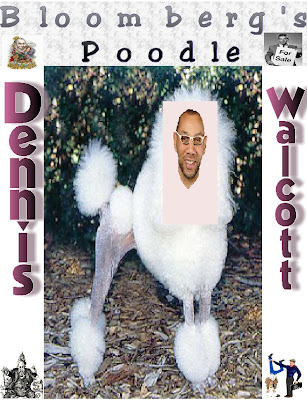 In the uproar that followed the release of the bogus "teacher data reports" (TDR) it is only fair that the Chancellor also be given a numerical grade on his ability to run the Department of Education.  Unlike the complex and complected mathematical formula that only blogger JD2718 can understand, I simplified it to an easily understandable equation.

The Chancellor has shown not one ounce of independent thought from the Mayor's.
Moreover, under the Chancellor's tenure, teacher morale has sunk to an all time low.
There has been no improvement in student academic achievement under Dennis Walcott.
The same is true when it comes to "career and college readiness" rates.
Under Dennis Walcott parent involvement in DOE policy decisions are still non-existent.
Finally, the racial/income student achievement gap has remained unacceptably wide.  Therefore, when I input the data into my formula here is what I get.

Please stop insulting poodles. I raise them and they are incredibly smart, loyal, and loving. A slimy, evil porcupine is more in keeping with Walcott. (love your blog)

A very accurate analysis of the Chancellor and a well deserved grade.

I refuse to associate any natural animal species with Walcott. After all, nature does not create such conniving and spineless automaton/yes man but nurture and a truly corrupt system that rewards the shiftiest of them all.

City strapped for cash,yet everywhere I travel in NYC, the pubic building and construction trade is needlessly booming. They are tearing up street corners in residential nabes and replacing them with islands that extend out into the street. Completely uneccesaary, wasteful, and downright bizarre.. Other than, of course, to feed King Bloombergs erection obsession. Totally corrupt stuff going on here, with no citizen input at all. This man is dangerous, and we should fear the day he holds any other public office.
This is Michael's world, and we are allowed to exist in it.