Why Didn't The DOE Remove The Principal For Covering Up The Beating Of A Student By The Dean? 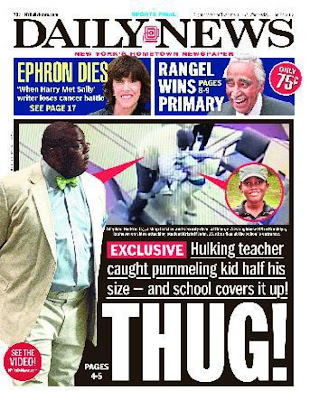 The New York Daily News was given a video of a 300 pound dean bashing a 125 pound teenager into a table and based upon the video footage the Dean initiated the physical contact.  Watching the video it is very obvious that the Dean violated Chancellor's Regulation A-420  (Corporal Punishment) and the Principal should have immediately contacted the Office of Special Investigations (OSI).  Instead the Principal chose to ignore regulations and after watching the video, only gave a letter-to-the-file to the Dean.  What was worse is that the school told the parent of the battered boy that her child had started the physical altercation.

The mother contacted the school when her son told her that the Dean started the physical altercation and that his back was hurting., When the mother called the Principal, Janiine Kieran, the mother was told that she would look into it and call her back.  The Principal never did.

For a complete look at the Daiky News article and video you can read and see it here.
Posted by Chaz at 8:01 PM

The puppet has no discipline problems with administrators, because there is no policy. You can't have a double standard when you have NO standards. Two times nothing is still nothing. And why are you surprised that the principal is still on the job, forget suspended, pay or not. The principal that just got the job at the charter school, did not get suspended or fired, after being responsible for a students' death. It was only after they caught him basically stealing their money did they fire him. All this woman did was cover up a little wrestling practice. Please Chaz, I read this blog because I feel you stand up for the people, aren't administrators, like corporations, people too?

Chaz - where is it in writing - the agreement that teachers are not to terminated after a substantiated investigation by the principal?