Another Principal Acting Badly And The DOE Does Nothing About It. 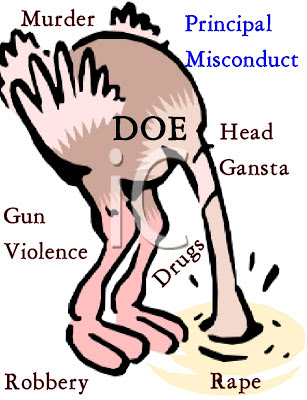 The DOE "double standard" continues when disciplining teachers and administrators as the New York Post exposed another despicable example of a Principal doing something that would have removed and probably terminate a teacher. The New York Post article describes Leadership Academy Principal Anissa Chalmers who was appointed Principal of P.S. 132 in the Bronx in 2006 and has had a difficult time in bringing discipline to a school that has reported an astounding 172 "incidents" in this school year.  This "D" rated school has had its share of bad publicity, here, here, and here, just to name a few. Interestingly, Principal Chalmers cancelled a 5th grade graduation ceremony because of the students behaving badly.  I guess acting and behaving badly only applies to the students and not to Principal Chalmers.

What is Principal Anissa Chalmers accused of doing?  While Principal of P.S. 132 she used extremely poor judgement and made a "B" rated movie call "Gang Girl" where the Principal plays the lead Gansta and shoots, rapes, and murders her rivals.  Furthermore, she also distributes drugs and commits robberies in this terribly violent and bloody movie.  What a role model this Leadership Academy Principal is to her violence ridden school.  I guess she is just paving the way for her elementary school children to follow in her footsteps and glorify gang life. 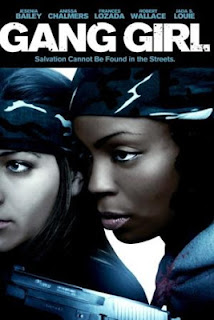 What has the DOE done about the Principal's extremely poor judgement in making a violence-ridden film while a Principal?  Nothing, Principal Chalmers is still Principal and while the DOE claims she is under investigation for an undefined allegation, the fact that she is still running her school tells me that the DOE is not serious in removing the Principal.  I see this as another example of the DOE "double standard" when disciplining teachers and administrators for alleged misconduct.

If I was a parent of a child in her school I would demand her immediate removal as a terrible role model for my child and the school's student body.  How can the DOE allow her to run the school?  Easy it's "children last....Always" at the DOE.
Posted by Chaz at 8:56 AM

Aw c'mon now, she made this movie a few years ago. I am not touting her leadership abilities. I have absolutely no idea of who this woman is, much less her capabilities to lead a school. But, you can be sure that most anyone looking for a career in the movie/TV industry would accept the role that she played. I am sure that Ronald Reagan must have done in a few Native Americans in his time. Clint shot up loads of guys as a lawman and he became Mayor of Carmel. Bet that you would play OBL if it was a ticket out of teaching!!!


I think you are missing the point. The DOE and Chancellor Walcott has made it clear that teachers are evaluated by a stricter standard, why shouldn't principals?

Second, she was already a Principal and did not tell the DOE what the movie was about.

Finally, Ronald Regan was not a politician before he made westerns and they were appropriate movies. All rated "PG" not "M or X", if it was rated.

Good thing she didn't make an off handed wisecrack on Facebook or her ass would be gone. Oh wait that only happens to teachers.

She is not a role model for this community, special where the school is located. She is a street girl with the opportunity to serve other. However, she is not a good principal because most her school's staff have something to say about her. 172 incident in less than one year is too much for elementary school. If the stripper teacher left, she should go, too.

This was a fictional drama? Is there a rule that says that principals/teachers can't engage in acting during off hours? I've known many teachers that take acting roles outside of work- are you saying that you believe the DOE should prohibit teachers from acting during off-hours? I, for one, don't want the DOE telling me that I can't pursue my hobbies/outside interests during my evenings, weekends and summers.

She has threaten her own staff and teachers. She has a number of lawsuits against her. She cannot keep male AP's . The most recent hire as an assistan principle was a favor to a friend. The woman is as dumb as a post. Recently the principal was about be attacked because she got snide with a parent. But her greatest accomplishment was the hiring of a Parent Coordinatpr who was double dipping and getting paid from the DOE. She won't get rid of him. But wait her wedding was on tv.

She is a total thug. She treats her teachers like they are trash. She has no regard form the work they are putting in to help the students. That school was not the best academically before she got there, but it was not a violent place. The students and teachers had a respectful admiration for one another. Sure, there were a few "bad seeds", but none that couldn't be helped. I tried numerous times to let the DOE know about her roles in movies, this one in particular when Klein was in charge. That's how long it's been around. She needs to
Be dismissed and gotten rid of

Hello I am the filmmaker of the so called B movie GANG GIRL and this message is to the so called ANYOMNUS. For starters this is NOT just another glorification of violence...you know what? I'm gonna make viral video of this and call you out since no one reads or have logic anymore; therefore I will tell you visually not only how wrong you are but how DUMB
you are. Stay tuned