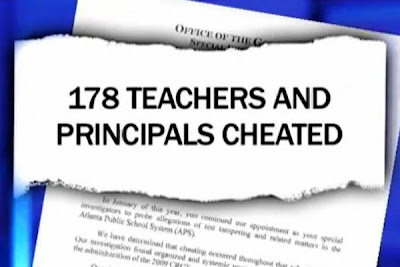 One of the education officials that education reformers pointed to as an example of great leadership and a "no excuses" approach when it came to testing, has been indited, along with 34 other educators in the "Atlanta cheating scandal".  Superintendent Beverly Hall who was exposed as a fraud for allowing cheating on her watch was indited by a Grand Jury and is facing charges of racketeering, influencing witnesses, conspiracy, making false statements, and fraud.  She faces up to 45 years in jail if found guilty of all charges.

The prosecutors have recommended bail of  $7.5 million dollars for Ms. Hall and claim that she illegally obtained $581,000 in performance bonuses for the phony test scores that resulted from the "cheating".  Under Ms. Hall's watch she fired 90% of the principals who couldn't meet the impossibly high standards she required.  For the other 10%, the pressure on them to keep their jobs forced them to "cheat".  For the principals it was "low scores, out the door".   Ms. Hall called it "no exceptions, no excuses". Furthermore, many principals received bonuses for raising student test scores which added to the problem. With principals under pressure to cheat, it was transferred to the teachers and it was common practice for schools to raise test scores to the point that student who tested poorly and were 1s were raised to 2s and 2s raised to 3s. One teacher finally blew the whistle to an investigator and the entire cheating scandel was exposed.

Of the 178 educators who were involved in the "Atlanta cheating scandal"  almost all have been fired, retired, or did not have their contract renewed.  Only 21 of them have been reinstated on appeal.  The State of Georgia has reviewed 159 of the educators and revoked 41 teaching licenses, gave 100 two year suspensions, 9 were given less than two year suspensions and six did not have any penalty. 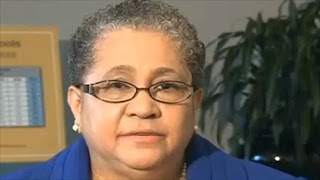 Ms. Hall has stated that not one person has claimed that she asked them to cheat.  However, she "Atlanta cheating scandal" was under Ms. Hall's watch and she now must face the consequences for her actions. She created an atmosphere that encouraged cheating.   In fact she was known to retaliate against educators that reported cheating. One example:

When a teacher at C.W. Hill Elementary complained about cheating by a colleague in 2005, Hall suspended the accused educator for 20 days. As for the whistle-blower, Hall fired her.

It was her policies, and pressure to raise test scores by any means possible and ignoring evidence of wrongdoing that is the issue.  She was responsible for all the policies that encouraged the cheating and hurt the children who needed remedial help and didn't get it because of the phony scores, now she will suffer the consequences for her actions.

Is Michele Rhee next?

No chance Rhee has to face any music. DC is run by US DOE, and the powers that be there will NEVER allow that to happen. Their whole house of cards would come crashing down...

Is New York next

They are doing the same old.same old- sacrificing some low level sheep while letting the biguns skate. Cheating doesn't only happen at the school level, it also issues from above, as in the purchasing of tests normed in such a way as to obtain a desired result for political or financial gain. Et tu, Doomturd?