Why Chancellor Walcott Should Go To Jail. 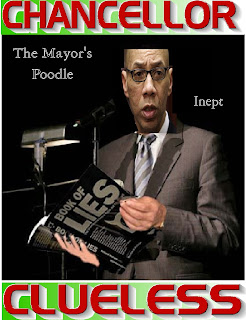 Clueless Chancellor Dennis Walcott has shown what a wonderful role model he is to the students by defying a judge's decision to allocate $240 million dollars to the New York City schools and has instituted a "hiring freeze" until the Bloomberg Administration exhausts their appeal process.  The result is a high teacher attrition rate with many classrooms without a full time teacher and an increase in class size. As of the beginning of the second semester (January 29th), 400 teachers have left the system and have not been replaced and the DOE expect another 300 to leave before the end of the school year,. for a total of 700 teachers not replaced.

The fact that Chancellor Walcott has defied a judge's order to distribute the needed funds to the New York City classrooms is outrageous and hurts the children.  The Chancellor's willful disregard of the judge's order should earn him some jail time.   In addition, the City Council's education head said the following about the Chancellor and his Tweed buddies:

"The judge should hold them in contempt of court and, if necessary, fine them and put them in jail," said Manhattan Councilman Robert Jackson.

The DOE had instituted the cuts back in late January which surprised the City Council and lead to many angry questioning of the Chancellor and his staff.  The Chancellor's response to the questioning on why the DOE included the cuts when a judge ordered them not to so was to claim that the City was appealing the ruling and they decided not to include the $240 million dollars in the school budget process while the appeal is ongoing.  It is just incredible that the DOE refuses to follow a lawful order to provide the necessary funds to the City's school children because of political considerations.  But then the inept Chancellor is the Mayor's poodle and does not have a mind of his own. He does what the Mayor tells him and not what is best for the children. 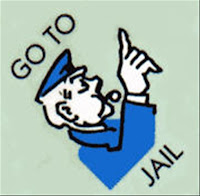 Fewer teachers, larger class sizes, and a lack of resources are the result of the Chancellor's terrible "children last" decision to disobey the judge.  Yes, if I was the judge I would throw Dennis Walcott in jail and throw away the key until the $240 million dollars in desperately needed funds are restored to the City's public schools. For Chancellor Dennis Walcott and his Tweed buddies it is just another example of "children last.....Always".
Posted by Chaz at 10:01 AM

In the final days the goal is to destabilize the system as much as possible to make the charter alternative more appealing. Every union teacher that disappears is a win-win for WalBloom. Jail is too good for them. A public stock where we throw stuff at them is what they need.

Love the headline. But, as you know, jail is for the little people.

Chaz you cannot expect his honor and the chancellor his eminence Walcott to follow the law so close to the devastating reversal of the soda ban, have heart will ya. Yes they are in contempt of the law and public school communities.

The thing to keep in mind is that Walcott makes almost no decisions. Prior to leaving, Joel Klein put together an army of lawyers aka DOE Legal. It was run by Michael Best. He left to work for the mayor and was replaced by Courtenaye Jackson-Chase. That's why it didn't matter if it was Cathy Black or Mickey Mouse. Like the Queen of England..he is a figure head.

Put them in stocks in Times Square and allow them to be pelted by whatever the public tosses at them. Then remove Gloomberg & his poodle to jail cells, where they will feast on high-salt, high-fat foods washed down by large amounts of soda. Then put them in charge of some oversized classes at Thugville High School and see how THEY fare. Oh, and no body guards, Mr. "I'm above all the little people". That would hardly be fair, as teachers assaulted by the denizens of Thugville High School don't have them, eh? Mwahahahaha.