The State And City Are Setting Up Teachers For Failure With The State's Common Core Tests. 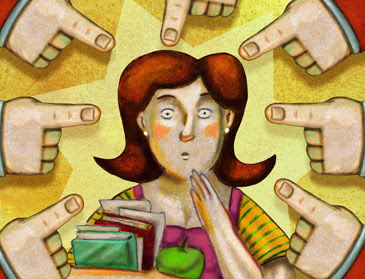 This Spring, the State of New York has decided that their tests will be based upon the "Common Core standards".  While on the surface this seems to be a good idea, the problem is that New York City teachers have not been trained in using the "Common Core" and many have no or inadequate materials that can help them with the new standards.

The State has rolled out the new tests without funding the resources or materials for the "Common Core standards".  Even when the School Districts, unions, and parents complained about the lack of State funding, NYSED Commissioner John King stated that the "common core" materials were available on the State website, as if that was sufficient; It's not by a long shot. In fact, according to NYSUT, 70% of the teachers lack textbooks and materials required for the "Common Core" tests. According to the President of NYSUT Richard C. Iannuzzi, "no experienced teacher would test students without teaching them the materials, yet that is what the State is doing". 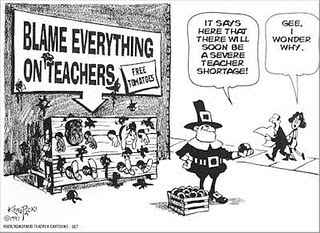 The DOE, with its 23 billion dollar budget and bloated bureaucracy has failed to provide any significant training for the "Common Core" tests. Now, after waiting patiently for the State and/or the City to provide training,  the UFT has belatedly taken upon itself to help teachers by providing information in a website called Share My Lesson.  However, for many teachers and their students it's "too little and too late" for this year's tests.  Even the State and City admit that the State test scores will be significantly lower than in the past. However, I predict when the actual scores come in and they are poor, guess who will be blamed?  Right you are, it's the teacher's fault!  I can see the New Yoirk Daily News and Post with blaring headlines and editorials blaming teachers for the poor test scores and the Mayor and Chancellor claiming that if only they had the power to fire "bad teachers" the scores would improve.

The bottom line is that look for the politicians and their media cronies to point fingers and blame the teachers for the poor results in the "Common Core" tests. It's always the teacher's fault.

You better believe that everybody will blame teachers since they refuse to be held accountable themselves.