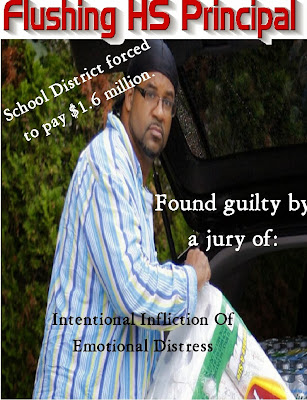 The hypocrite Chancellor has done it yet again.  He proclaims that there is "zero tolerance" of teachers accused, but not found guilty of sexual misconduct but gives his managers and administrators a pass when they are accused.  Now we find that the Chancellor has hired a man, James Brown that was sued for sexual harassment, bullying.  racist comments and retaliation against a female dean at a Baldwin middle school who won the lawsuit against him.  Notice, this was not just an accusation but a lawsuit where the preponderance of evidence presented showed that Mr. Brown was found guilty of such behavior.  The story can be found here.

Mr. Brown was removed from the Baldwin school in 2009 and was sent to the District office, away from the children, until he resigned in 2012.  Mr. Brown was also accused of saying sexually inappropriate comments. While at Baldwin, Brown was accused of remarking on the tightness of a female student’s pants, said a federal lawsuit against him.  He also said to the female dean to make a school report “tight as a virgin’s, well, you know what is tight on a virgin,” she reported. Yet our so-called "zero tolerance" clueless Chancellor hired him to be a Principal of an already troubled Flushing High School, unbelievable! 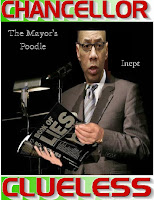 Chancellor Walcott has, once again, has been exposed as a hypocrite and practicing a "double standard" when it comes to teachers and administrators.  Remember these stories  here and here?
It seems our clueless Chancellor does not "practice what he preaches" when it comes to selecting and disciplining the DOE administrators.  Thank goodness we only have 99 more days of his inept and terrible leadership of the New York City schools.  Tick, tick, tick.

This is disgusting! Walcott should be fired for lack of due diligence for hiring such a creep! Come on Mulgrew, take a stand and call for his ouster in the name of your union members.

You expect Mulgrew, who himself was banging a married woman at the school where he worked, to show leadership in this? To quote the wife in a B&H Photo commercial: "HAH!!"

Talk about due diligence. Check this out. From the Village Voice, 9/20/13.

It appears that carrying 20 bags of heroin into a city courthouse is not a fireable offense in New York City. In a ruling released yesterday, Manhattan Supreme Court Justice Manuel Mendez found that Damian Esteban, found with 20 bags of heroin when he reported for jury duty last October, must be allowed to keep his job at Williamsburg High School for Architecture and Design, overturning the Department of Education's original firing.

When Esteban reported for jury during on October 17 of last year, heroin was found in a cigarette pack he was carrying. He was charged with misdemeanor drug possession, but the charges were dropped six months ago on the condition he stay out of trouble and attend a substance abuse program.

Esteban claims he began using heroin because of pain from an old ankle injury, according to the New York Post.

Judge Mendez overturned the Department of Education's firing of Esteban on the basis that "no evidence that the conduct with which [Esteban] was charged affects his performance as a teacher," according to the ruling, despite an arbitrator's earlier finding that it was possible Esteban had brought the heroin into the schoolhouse.

Esteban, 34, taught Global Studies to high school students. He describes himself on his personal website as a "scholar of Islamic Studies, Educator and all-around computer geek."

Indeed, Esteban has a master's degree in Islamic Studies from McGill University, for which he wrote a 95-page study of one of the world's first recorded attempts at a book of world history and political theory, written in 1377, entitled "Religion and the State in Ibn Khaldiin's Muqaddimah".

There's such a huge discrepancy between how administrators and teachers are treated. Teachers that are terminated or discontinued or denied tenure under the NYCDOE are placed on an "inquiry list" and it's near impossible to find any job in the education profession again with that scarlet letter. But administrators are often just transferred to other districts, other schools, and parents and staff often have no way of knowing about the admin's checkered history. It's an absolute disgrace that there's such a double standard.

I'm sure the Chancellor will claim he is investigating the hiring but look for nothing to come of it. Just abother case of the double standard.

You're so right and hopefully this will change with De Blasio.

I like de Blasio and have hopes that he will reverse at least some of Bloomberg's policies, but I think 12 years of Klein/Black/Walcott and the system they've put in place is going to be hard to undo. It's not just one or two crazy and incompetent administrators, it's not even 50 or 100, it's really system-wide. And on the union level, it's not just some chapter leaders or union leaders who are afraid to stand up to administrators, that problem is also system-wide.

Also, the other big double-standard is how even after administrators are removed for serious 3020-a worthy misconduct, they are somehow allowed to go back to teaching. If teachers who are terminated through the 3020-a process are basically "never allowed to work in this town again" it boggles the mind that administrators as the last resort can just go back to teaching.

This guy seems overbearing, obnoxious, harassing and misogynist. He is everything Walcott loves in an administrator.

Does the city's insurance carrier know he was hired? He is a liability to say the least. At this point every female on his staff should sue...it already has been proven he is a sexual harasser and that should enable new suits to get to trial.

The Damian Esteban story printed above has nothing to do with due diligence.

You gotta love it that crybaby so called eva moskowitz is complaining that the very existance of their charter school crap is in jeopardy of closing. Hey, guess what, when Diblasio throws all the charters out of the school buildings we will now have what we call CHARTER ATRS......and eva moskowitch is going into the ATR pool....love it juicy yummy you go blasio....go with the fro not the loho

This so called witchy poo moskowitz is planning on a brooklyn bridge march crying how her precious little charter schools will be in jeopardy of closing - pay your rent bit**. You have gotten a free ride from bloomterd and the devil klein but now its time to pay the piper....yet its time to rid these vermin like moskowitch, bloomterd, klein devil,you go blas kick ass

This so called moskowitz woman and her charter school crap now reports that this "non profit" school provides an anual salary of 500K for moskowitz ...... yeah right, non profit....AND.... THE BEST YET.....This woman moskowitzwitchs husband attorney for the charter schools also pulls down couple hundred thousand!!!!! We have been duped people by these phoney terds get them out vote blas......

How the hell is the Principal still there? I feel sorry for the staff at Flushing HS.