The Dark Side Of The Charter School Story. 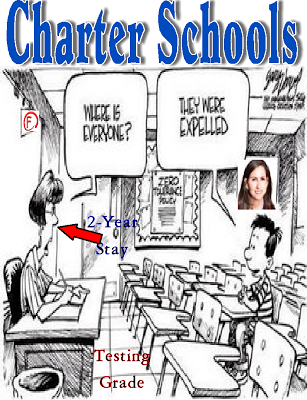 The airwaves and newspapers are being bombarded with pro charter school commercials about how important they are for the children of New York City and don't take away parental choice.  However, what these commercials don't show is the dark side of the charter school story and the "uneven playing field" the charters enjoyed under the Bloomberg Administration that allowed them an increasing part of the DOE budget, facilities, and private access, while exempting them of oversight. This "gravy train" allowed charters to thrive and expand as Randi Weingarten failed to challenge then Chancellor Joel Klein on co-locating charter schools in public school buildings. Now that the De Blasio Administration has decided to take another look at the recent co-locations, he found that 9 of 45 were not appropriate and that 3 of Eva Moskowitz's Success Academies co-locations are to be revoked. Moreover, many of the charters will soon be paying rent that will result in another outcry from the charter schools and their supporters.  Finally, look for many of the rules that the charter schools were allowed to ignore, such as auditing and certified teachers to be imposed on the charter sector.

Let's look at the dark side of the story about charter schools.  Many education reformers hail the charter schools as a step forward in education.  However, the reality is very different.  Overall, despite the claims,  charter schools are no more successful than their District schools and experience very high teacher turnover, usually most charter schools have a complete turnover in staff by the third year.  Furthermore, the charter schools expel students due to academic, behavioral, or attendance issues and fail to replace these students.  They also are accused of consoling out students by threatening to have them repeat a grade if they don't leave, especially when the student is going into a testable grade. Here sre some statistics about the Harlem Success charter school that provide some context to this issue.

83 students entered kindergarten in 2006-07, the school’s first year of operation. When that class reached 4th grade in 2010-11, it had only 53 students — a drop of 36 percent. Harlem Success also took in a 1st grade class with 73 students in 2006. When that group reached 5th grade, it too had shrunk appreciably — by 36 percent. The attrition accelerated as the classes advanced.....

For a more detailed review of Eva Moskowitz's charter school student attrition rate read Ed Notes online blog. In addition, the Chicago Public School system reported that the Chicago charter schools expel 12 times more students that the public schools and there is little reason to believe its any different for the NYC charter schools.

Moreover, the charter schools focus on the testable subjects like English and Math to show artificially high test scores.  Many of these schools give little attention to a genuine total education of the student, its just "drill and kill" for the English and Math tests for the remaining students left in the school.  Additionally, the charter schools exclude Special Education and English Language Learners from their school by claiming they don't have the resources to provide the services they need. Finally, every dollar that the DOE gives to a charter school is one dollar less for the NYC public schools so its like "robbing Peter to pay Paul". 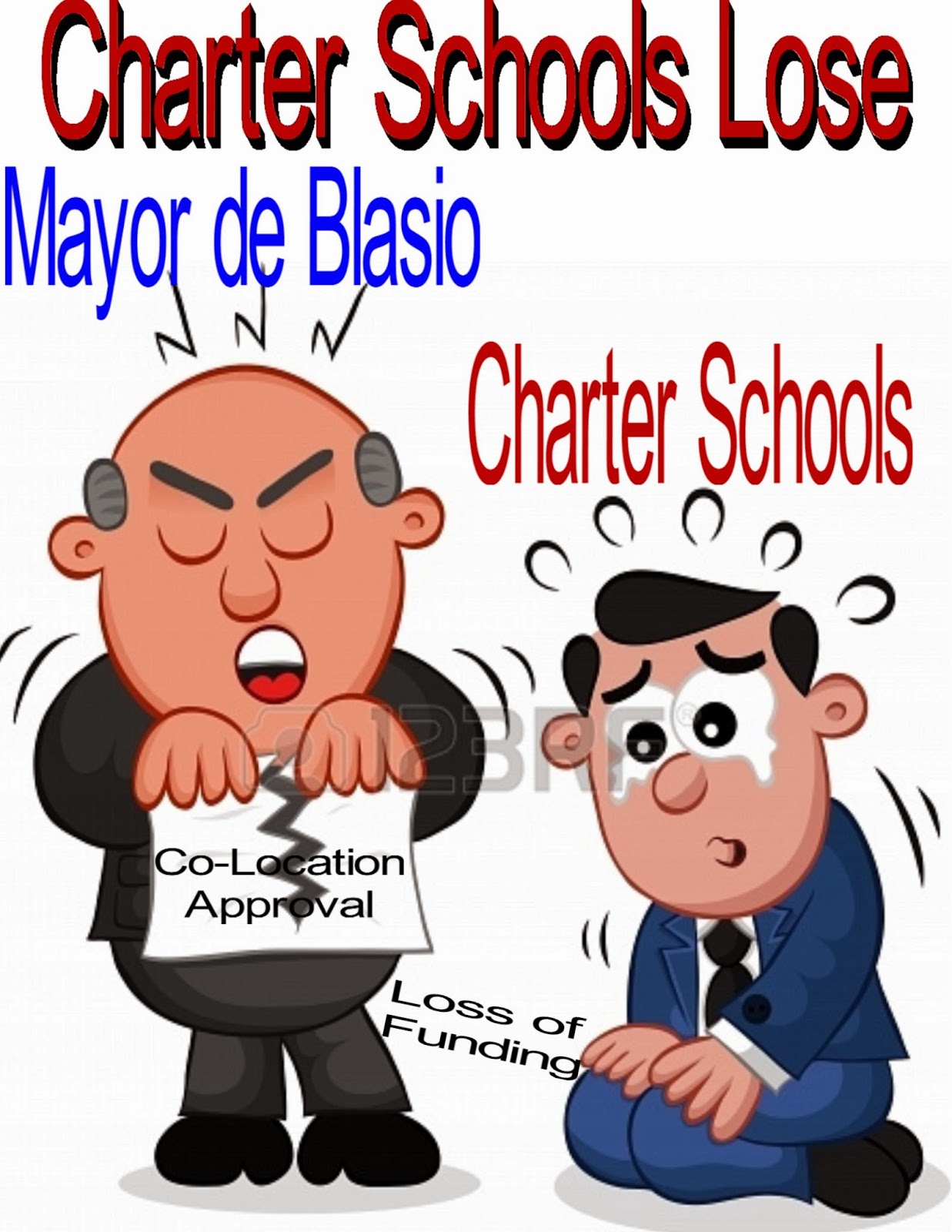 In reality, the charter school miracle is simply "smoke and mirrors" and when their operation is scrutinized the "dark side" of this so called "miracle" shows a pattern of exclusion of "high needs" students, lack of a community representative student body, and a failure to provide a stable and certified teaching staff necessary to give a complete educational experience, not just constant and never ending "test preparation".  My other stories on charter schools can be found Here.
Posted by Chaz at 9:11 AM

This piece should be part of a full page ad taken by the UFT in the major NY papers, in all out effort to inform and educate the general public about the lies and propaganda perpetrated by the profit making charter school profiteers, like Evil Moskowitz and her ilk.

Moskowitz is a PIG!

Moskowitz should co-locate in her own huge apartment . Let the kids use a bedroom - I'm sure she has plenty to spare. She can use her own insane salary to rent some buildings in Harlem and then she can go to hell and open schools there.

Doesnt the uft waste enough of our dues on nonsense. Last thing they should do is more advertisement

All the moskowitz crocodile tears are coming out now BOOOOOOHOOOO. Who will cry out for the public school students who are not allowed to share all the financial benefits that charter schools enjoy? Not Eva

Our UNION should be in full support of ..A city official that promised on Saturday to investigate Eva Moskowitz if she pulls kids out of class this week for a protest in Albany.WAKE UP UFT this is your moment to educate the public about the phony moskowitz

Having worked in at least four buildings during the course of my career, where charter schools have been located in each of them, I have seen the unfair and devastating effects of co-location. In every one of those cases, the students in the public schools had to do more with less (a hallmark philosophy of the Bloomberg 12 miserable years), because charters were usurping facilities such as the gym, the locker rooms, the cafeteria, and most sadly, the library. Meanwhile, for profit making organizations who ran each of these charter schools gave nothing, absolutely nada back to the building in which they were sucking facilities and resources from. Finally, I worked in a DOE program that was eventually forced out of the building because the charter school was eating up space like a parasitic tape worm. Where did that leave our kids? Lastly, I know for a fact that charters do not replace the kids they send packing if they are deemed as behavioral problems or academic drags on their testing data. These are the kinds of things that the NYP and DN fail to talk about.

Yet another bunch (5!) of articles in the Post today. Goodwin is the most moronic, backward, Neanderthal the Post has on staff. He constantly denigrates NY city public school teachers and our union. The guy is unbelievably ignorant. (If Eva Moskowitz should enroll him in one of her Success Academies, he'd fail out in week.)You can reach him at mgoodwin@nypost.com

Right you are. The teachers at the charters mark their own Regents unlike the Public School teachers. Can you guess why the Bloomberg Administration allowed this?

I have heard this numerous times but the DOE or media ignores these complaints.

Eva Moskowitz and her minions are vampires. They're sucking all the life force out of the NYC public schools (best students, money, buildings, and equipment). DeBlasio van Helsing drag her and her actions into the light and she will vanish.

On another note what is going on with the ATR observations by these field supervisors. ATRs are being observed out of license with students they don't know as a direct violation of the ATR contract and the teachers' contract. What if anything is being done to stop this harassment!!!

I just got my email from my ATR supervisor stating that I will have my formal observation this Wednesday at 1030AM. I was instructed to find the Asst Principal Monday morning and ask him what class will I be covering on Wednesday at 1030AM so I can prepare for my observation. If I am U rated since this seems to be a set up to make the ATRs look like failures I would also like to know where is my union ???since I am paying dues

Bronx ATR you are correct
.Michael Goodwin is the biggest jerk as his journalism is so CLEARLY BIASED and all that he writes is still the same ole bloomterd bs jargon. Its fine to take negative articles from journalist but when a writer continues to just write the SAME BULL CRAP then its not journalism its kissing your bosses ass (and in this case the dumb post editors and alike) so the jerk of the journalism tabloids must go to michael goodwin - an old, outdated writer who really should be ashamed of himself

My friend who is a vision teacher was paid a SURPRISE visit by her sup who observed her in a graphic arts class. The teacher had not left any work and the kids in that school are horrible. Guess what she got? And when she called the union she was told that the sup can do this!!!! This is ridiculous.

Moskowitch can rant and scream all she wants. if we all remember we all ranted and screamed for 12 years under the bloomterd reign of terror trying to "convince" the PEP (puppet educational policy) to keep our schools open or to keep other schools from co-locating into our school. But in the end, ALL placements went as planned and the same needs to hold true now that the scum greedy mosikowitch wants her schools all over nyc at the expense of public school children.

Still no word from CF on the nonsensical ATR observations. Not good news at all. One wonders what factors are being weighed- I don't recall any press notification when the process was started- should be easy to stop.

I interviewed at a highly regarded charter school operation just today. I haven't decided yet on whether to take the offer, but here is what I witnessed:

1. The interviewer told us very bluntly: "Just because we had a movie made about us and our leader has been on Oprah doesn't mean this is utopia. Our students have a lot of problems, behavior and learning. It's not easy."

2. Although the school has a uniform rule, from what I saw most of the kids transformed their neat vests into do-rags and others just refused to wear the uniform.

3. There were kids running all over the hall, with no security guards to stop them.

4. The girls were very rowdy and I witnessed a fight break out.

5. There was practically no need for upper middle and high school teachers because they told us that currently the high school cohort only has 62 kids. 62 kids in an entire grade. This school accepts many more students in the early elementary grades, so you wonder what happened to the students who didn't make it to the "elite 62."

In other words, there's a myth flying around that charter schools have better discipline and thus higher quality education. But from what I witnessed, it looked like a very typical urban public school.

That's because most of the children left or expelled from the school by 9th grade.

Junk journalists of his ilk prey on the emotions of readers who believe that teachers "have it good". Sensationalizing and stereotyping is a lot easier than actually researching the truth.