Crain's Joins The Media Bashing Of ATRs With A Highly Inaccurate Editorial. 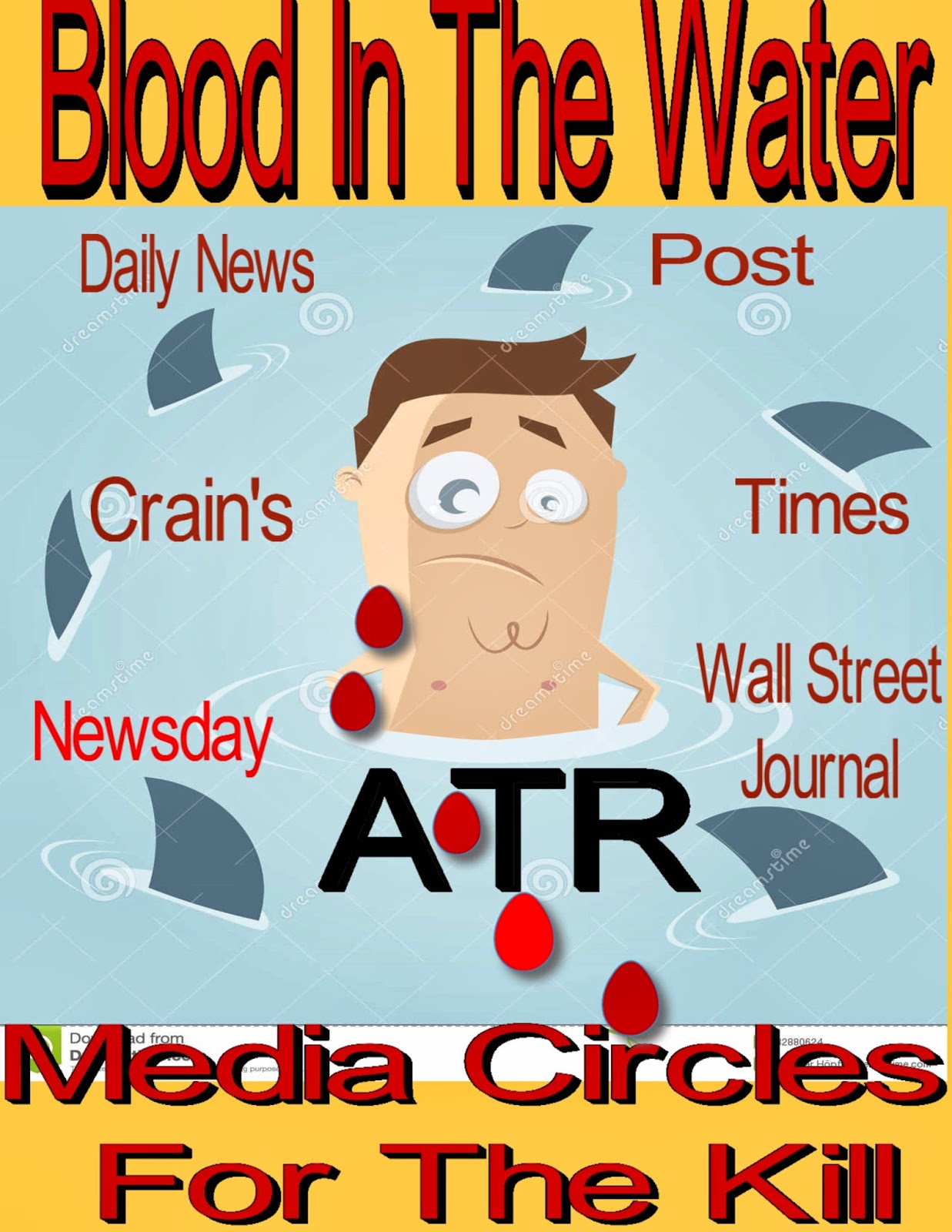 Crain's NY Business has joined the newspaper bashing of ATRs by writing an editorial on why the ATRs should be terminated.  The editorial titled "Rubber room must hit the road".  Even from the title one can see how confused the editorial is since ATRs are not teachers awaiting discipline but teachers without a classroom.The editorial continues their inaccuracies by stating the following:

"The poster child for nonsensical job protection is something called the Absent Teacher Reserve also known as the "rubber room"".

The entire editorial confuses the ATR situation with the "rubber room" as if the ATRs are discipline problems despite the fact that over 60% never had a discipline charge logged against them and the other 40% went through the discipline process and were found to be innocent of any major discipline and were returned to the classroom with full rights as teachers.

The editorial includes the same deliberate inaccuracies and omissions that the other newspaper editorials do, like ignoring the effects of the "fair student funding" and the fact that principal budgets are constructed so that the schools are encouraged to hire the "cheapest" and not the "best teachers" for the school, and the targeting of schools for closure (163 of them).  It seems to me every metropolitan newspaper uses the same script.  Demonize the ATRs as unwanted or bad teachers and impose a time limit for them to get a position and then fire them without bothering to mention the underlying causes for the 2,000+ ATR pool in the first place.  Why bother telling the readers the truth? That only destroys the illusion that its the ATR's fault and not the bad policy decisions by the Bloomberg Administration and the DOE.  It's better to claim that no Principal want them rather than blame the polices set by the Bloomberg/Klein?Walcott tenure with the union being complicit to this perverse and costly predicament.

The entire Crain's article was reprinted on Betsy Combier's blog.
Posted by Chaz at 9:15 AM

A disgusting article by Crain's. No one wants to take the time to do a real story on ATR's. It's much more easy to just pound the situation with false writings. I mean the fact that Crain's gets away with writing false statements is horrible. The UFT I could imagine, could really move to file suit against Crain's for such a misleading piece. The ATR pool is not a rubber room. I have been teaching 21 years and have 21 satisfactories in a row, including multiple commendations, etc. I am not in a rubber room, nor was I ever. This is just horrid. There's a war going on but one side (UFT) is refusing to fight. This is bullshit!!!!!!!!

We keep spinning our wheels (in a different direction) along with the editorial boards of the major NY rags. The car is going nowhere. All the editiorals are basically the same - which leads me to believe they were orchestrated by the same person or small group of persons. Nothing can be done to get rid of ATRs other than put us back in the classroom or buy us out. I invite the Daily Tampon, NY Pox, Craven, etc. to write that. I wouldn't get too upset about it either- it just shows their contempt -for not only us, but their profession and their readers.

These articles are nothing new. We have been trashed on and off for years without any rebuttal from our esteemed union. I think we should file a libel suit against these papers and against the UFT for remaining silent.

What do you expect from a union so deeply entrenched in cronyism, "dynasties" of hand-picked successors (be they qualified or NOT), complete control of who gets heard at meetings, lavish spending on jaunts and perks for themselves, and which is headed by a former shop teacher who was caught in adultery with someone from school, thereby demonstrating a total lack of moral compass?

He actually has an English license but taught multi media. Joke.

Chaz: you're a member of some hand-picked ATR advisory group that supposedly shoots the breeze with Amy Arundell, the UFT's ATR queen. What happened at your last meeting? Did you ask her why the union has betrayed us?

When and where are these ATR meetings? I would love to attend. Many violations occur on a daily and weekly basis and the union does nothing.

Why no answers Chaz???

Most ATR's I've recently met at my school are gay. Is there some type of discrimination going on here? So what if most ATR's are gay. Big deal.

Anonymous 10:13
Your wrong. Something can and will be done to get rid of the ATR's. Its called a 9 year collective bargaining agreement. Look for a token buyout if you do not find a job within a very short period of time. Bye Bye ATR's.

It's incredible how ignorant some editorial writers are. If I could only unlearn enough of what I know, I'd apply for one of those gigs. For all I know, it beats working for a living.

How ignorant you are. There will be no time limit and if you bothered to read my blog more closely, you would know why.

Only an E4E drone or DOE administrator would believe such nonsense.

To 6:52,
You don't actually believe that, do you?
If there was a way Bloomberg would have found it and he tried. Let all the NY rags and left over Bloomy fleas try. I'd love to see the more militant unions go into attack mode and put you all in your place (Bloomberg's rectum).

Chaz Re-read my comment.
What is different this time is that the UFT is going to get a CBA. By by ATR's.

Chaz...What s to stop the UFT and the city from jointly approaching the State legislature in order to be able to lay off excessed teachers in the ATR pool after a year or so? You say a time limit won't be imposed. If that s the case, why is the UFT so silent on this issue as ATRs are attacked weekly in the press these days?

WE NEED GUIDANCE COUNSELORS IN THE SCHOOLS
New York State recorded a decline from 7,126 guidance counselors in local public schools in 2009, to 6,622 in school year 2011-12, a drop of 7%, even though the enrollments (and needs) had risen. Likewise, social workers in the state employed in public schools dropped by 6%, from 3,270 to 3,050 during the same time period. And nurses working in public schools in New York declined by 3%, from 3,662 to 3,544 during this time.
Why is it that the DOE under bloomshithead never bothered to ensure that guidance counselors remain in the schools rather than "rotating" them every week!!! You cannot make this crap up!!!

Who is this coward, "Anonymous" and why does he hide behind a nameless persona?
The truth: Principals cannot even consider hiring ATRs because Bloomberg took care of that with the Fair student funding formula. Principals simply cannot afford our years of knowledge, experience and expertise. We are teachers working with Masters Degrees, Doctorates, PHDs and excellent classroom management skills. The DOE administration is afraid of our wisdom as we might poison the innocent, young minds of new teachers who follow the herd. Why would any principal in their right mind choose a newbie over a veteran teacher? It all comes down to dollars and cents. Thank you Chaz, for shedding light and keeping us informed.

The other unions would pressure the State Assembly not to change civil service law and file a lawsuit if they tried.

He already has said that the union will not agree to a time limit and he has been firm on that.

Chaz: I asked you simple questions about your association with Amy Arundell's hand-picked ATR advisory committee. You blog terrifically on ATR issues, but you appear secretive about your advisory role with Amy. What's up? How many meeting have you had? What is discussed? Have you pressed Amy on ATR rights. If not, why not?

I will write a post about it this week.

Chaz, please look at Rob Astorino for governor. He posted an incredible 4 min video blasting Cuomo Common Core. Plenty of parents are voting Astorino in November. Maybe you can push too. Cuomo sucks!!!!

Unfortunately, he's pro charter and pro voucher. Not getting my vote.