Will Mayor De Blasio Practice What He Preaches On Retaining Good Teachers In The NYC Classroom? 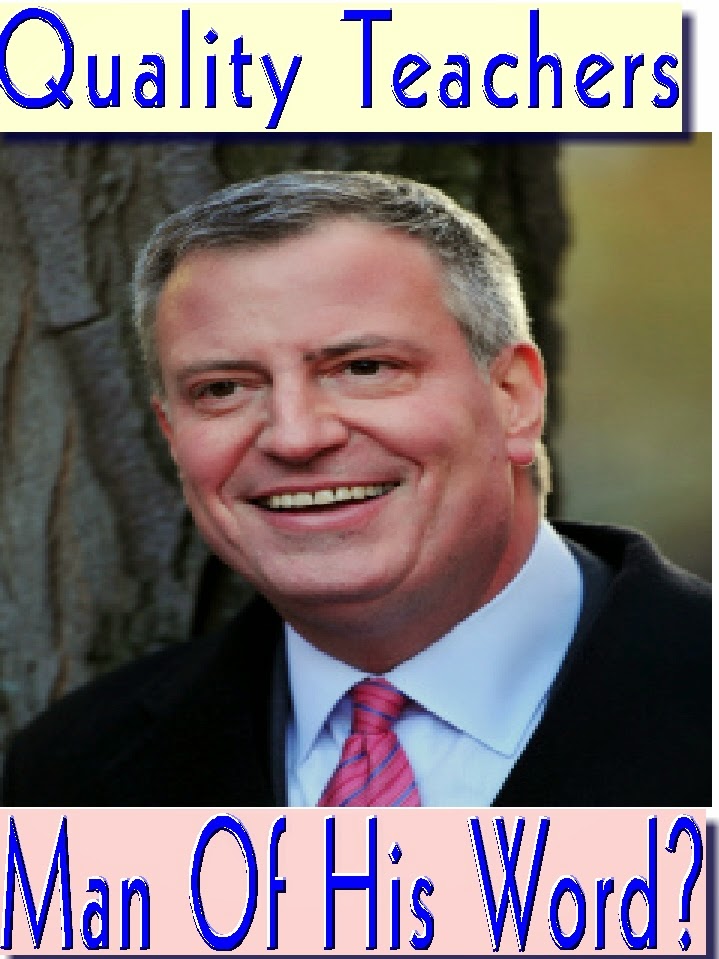 Mayor Bill de Blasio was interviewed by WNYC-FM about the New York City public schools and said that he will make it a "personal crusade" to keep and retain good teachers.  Interestingly, at the same time he was speaking to public radio there are over 2,000 teachers without a permanent classroom.  Many of these teachers are ""quality teachers" excessed from their schools during the Bloomberg years for various reasons and ended up in the ATR pool.  How can the new Mayor claim that he wants "good teachers" when he has all these excessed teachers deliberately being kept out of the classroom despite being "highly qualified and credentialed" as required by the No Child Left Behind act?  I hope the Mayor "practices what he preaches".

The exact quote by the Mayor is "I'm going to make this a personal crusade that we focus n attracting the  best teachers".  He further stated "of all the things that would affect the future of educationin our city, this is one of the most central".

Will the new Mayor be a man of his word?  If so, the first thing he must do is immediately eliminate the DOE's "fair student funding" that requires principals to hire the "cheapest" and not the "best teachers" for the classroom. In addition, all teacher salaries should be funded through DOE Central and not as part of the school budget with schools being allocated "units" rather than forcing the schools to take salary into consideration.   By placing many, if not all ATRs, back into the classroom, the Mayor is giving students the "quality teachers" they deserve rather than be used as guinea pigs for untested "newbies".

However, if the new Mayor and Chancellor bows to the Bloomberg ideology that permenat6es the DOE and their media allies and continue to demonize the ATRs by wasting $160 million annually while misusing the teaching talent by making them "glorified babysitters" ,  then it's not what's best for the children as he claims but what's best for the "status quo"  .

Will the new Mayor follow the Bloomberg ideology by falsely equating the "cheapest teacher" as being the "best teacher"?  Or will Bill de Blasio and Carmen Farina do what's right for the students and encourage principals to bring the ATRs back into the classroom where they will help reduce class sizes, provide quality instruction, and bring the classroom management skills that the "newbie teachers" lack and will not acquire for many years, assuming their still teaching.

Polticians talk the talk but rarely walk the walk . I hope he does come through and give the ATRs an opportunity to go back to the classrooms. I have only been an ATR
since September and although it was a good experience as far as getting the chance to look at so many schools(20) so far this year, come September I prefer to stay in one school.
An ATR is not a realistic position, it is a mess created by the DOE and it is time for the new mayor to address this situation and do whats right for the kids. If they are true to the claim that the children are the priority.

.its going to be an interesting spring and summer


How can he have thousands of teachers in excess when he wants to make it his business to retain and keep the best teachers?

Chaz, you already answered this question on your own. Mayor De Blasio did NOT put these employees in the ATR pool. He inherited the problem (along with thousands of other problems) from Bloomberg the Atrocious. No one can expect any mayor to change the ATR situation in 90 days.

I know patience is hard and a lot of us had enough... everything takes time.

You heard it here first, Eva Moskowitz will be the next mayor of NYC. DeBlasio's cabinet has no clue how to run an administration. They fell right into the charter school trap. The media loves charters and the general public wants to see them at least try something "new". Moskowitz is now basically untouchable. DeBlasio is back peddling before she has martyr status. The woman will easily defeat DeBlasio in 2017. He made a huge mistake. Cuomo and the Senate are all for charters and he's the laughing stock. First time I ever saw a mayor of NYC get crushed so quickly. Public education is OVER!!!! It's just a matter if time. The universities and colleges have 30-40% drops in educational certification programs. No one wants to do it. The pay is miserable!!! Fariña was a bad choice but at least she's "friendly" to the UFT. Rather have a friend than a foe but she's so clueless. Can't wait for all her BS talk of how the public schools will build on morale. How's that workin out for ya Carmen? Maybe in September huh? Moskowitz 2017, you heard it here first. Count in it. DeBlasio is a 1 term mayor.

Chaz, i dont necessarily understand your stance on the fair student funding formula. My understanding is that when a school hires a teacher, it costs the school the average cost of every teacher. So if the average salary of a teacher at a school is 70k and they hire a teacher who makes 100k....they are actually getting a 30k discount for hiring that teacher.

How about letting us actually teach instead of running recess/lunch/bathroom duty? If the DOE would simply get rid of Circular 6 duties there would be an extra 50 minutes of instruction added to each school day for a massive amount of students. Such a simple idea. Cmon' Bill, you can do it!!!

The quote didn't say he wanted to "retain" good teachers, it said he wanted to "attract" them, implying that those already employed are inadequate.

Farina has already stated that she sees part of her job as "selling" the Common Core, which is part of the package to transform teaching into at-will, temp labor.

This is a change in tone, not in substance.

Mr Diblasio is a God sent to all of us hard working dedicated educators. Diblasio will be a great mayor in time because he truly is a person who is for the hard working people of NYC who make NYC what it is not crap head fakes like our former mayor (do not want to even write his name)

As I've said before Chaz, I'm resigning myself to the real possibility that I'll be back in the ATR pool next year. Nothing said by the mayor, chancellor or union has led me to believe otherwise. I can not express how much I detest the gates of hell high schools I rotate through in the Bronx. If China ever wants to collect any of their debt, I suggest giving them the Bronx. They'll find no resistance, just a bunch of weed smoking, entitled populace, shuffling by with their pants hanging around their thighs.

What are you crazy. We need to greatly pair down the number of ATR's. Many are an unproductive waste. Yes, we do need some of them, but very few.

You bare so wrong. I bet you're a E4E drone.

DeBlasio is a laughing stick at this point. It's everyone vs. DeBlasio. I really feel for this guy.

This is from 258.
I am a former 3020-a inmate. I got a job and so could you and others. Too much money is wasted on ATR's. You know they are going buy buy very shortly.

Lucky you, assuming you are telling the truth. However, for most veteran teachers who are in the ATR pool they can't get a position due to the "fair student funding".

If you were a 3020-a inmate (a poor choice of a word which does not come from a teacher) you would realize that 20% of the principals come from the "Leadership Academy" and won't touch an ATR because of Tweed brainwahing. I expected better from a tenured teacher.

I am still curious about my statement...please advise

That means the average teacher salary is multiplied by the 50 teachers ends up to increase the teacher cost to the school by $30,000.

No Principal wants to pay out an extra 30,000 no matter how needed that teacher is to the students.