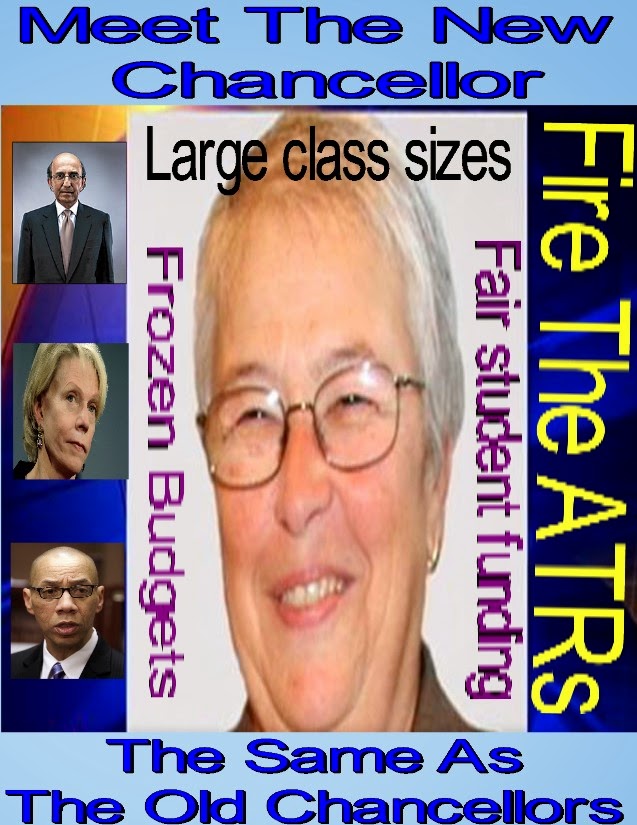 When Bill de Blasio became Mayor of New York City, many teachers were hoping for massive changes at Tweed.  The antagonistic tone coming out of the DOE would be replaced with a collaborative atmosphere that would result in positive changes to the classrooms and help the City's public school students.  However, under the disappointing Chancellor, Carmen Farina, little has changed at the school level.

Under Carmen Farina's tenure, school budgets remain frozen at levels 14% less than in 2008.  The continuation of the "fair student funding" that encourages principals to hire the "cheapest and not the best" teachers for their schools.  No reduction in the large class sizes that are the largest in the State. No change in the overwhelming paperwork requirements used by Tweed for data mining and the wasting of over $150 million dollars by keeping ATRs out of the classroom, a continuation of the punitive and ideological Bloomberg/Klein policies.  However, the worst aspect of Carmen Farina's Chancellorship was her failure to "clean house" both at the DOE and especially the large group (300) of "Leadership Academy principals" that she claimed shouldn't be running their schools.

Throughout the last few years many of these principals have found themselves in trouble but yet survived their sham or nonexistent DOE investigation to continue to run their schools into the ground.  Here is a partial list of some of these principals who made the newspapers because of their questionable actions.

Moreover, here are other school administrators that appear to be in serious need of remediation.
Is it any wonder that principals are happy with Carmen Farina as Chancellor?  Under the disappointing Chancellor, its still a "double standard" and when that issue is added to her failure to remove the Tweed 300 from policy making positions, it shows that for the classroom teacher its DOE business as usual and that's bad.

update:  Read the New York Post article on the admitted "double dipping" by Linda Hill and yes, the Chancellor still kept her on as Principal! Unbelievable!

As long as hundreds of attorneys continue to keep their jobs at the DOE , nothing will change.

They will continue to advise principals to go after teachers so those attorneys will keep their $70,000 a year jobs.

Hey Chaz, the Grimm reaper just left the doe for good! You know who I mean. The deputy chancellor who closed many of our beloved big high schools so she could put smaller schools in their place along with some charter schools. She also made many of us atrs as a result. The chancellor just sent us an email of what a great lost this was and a sad occasion because the Grimm reaper got a taste of her own medicine. I for one an very happy and I hope she burns in hell. I am going to spit on her grave. I sorry I know this is not a nice thing to say about someone's passing however this monster destroy many innocent teacher lives and careers. The balls of the chancellor to send us an email tell us to mourn the passing of this great educator and honoring her for all she has done. I think you should write a blog on her telling everyone of all the evil she had done and how many lives she destroy in order to sever her master Mayor Bloomberg and how many teacher do not respect her! Hell I am going to take a pass on her grave.

Anybody have APEX at their school? What a joke. Who allows this crap? Kids sign on and complete some questions, everything's wrong and then the administration basically demands the kid gets the credit.

I hope all the people who are not happy with Farina took the time to voice their mind in the annual NYC Teacher Survey that was due last week. It had plenty of questions for teachers to input how unhappy they are with Farina.

Surprised to see that Iris Blige is not on the list. As you may recall, she is the principal who ordered a chapter leader (whom she had served with 3020A papers) to sit in a closet. The chapter leader (Dr. Virginia Barden) subsequently filed a lawsuit against Blige and the DOE. Although Dr. Barden won her 3020A, she wound up becoming an ATR. The lawsuit was under way when Dr. Barden died very suddenly on February 8.

Iris Blige was left out because the DOE actually filed 3020-a charges against her. However, its interesting how she was allowed to remain as Principal.

Blige needs to go. The staff at the school despises this woman daily and this effects the teaching ability. The AP is a 29 year old no nothing math teacher no less....we all love our math teachers but lets face it, math teachers lack that social personality and the AP there with blige is scary...so, if anyone from the DOE is reading this, you need to remove blige from fordham hs arts as the entire school, students and the rest of the building do nothing but gossip about this cruel evil looking woman who has ruined and destroyed the lives of many hard working teachers. Please lets reform the DOE from the diseased organization is currently is