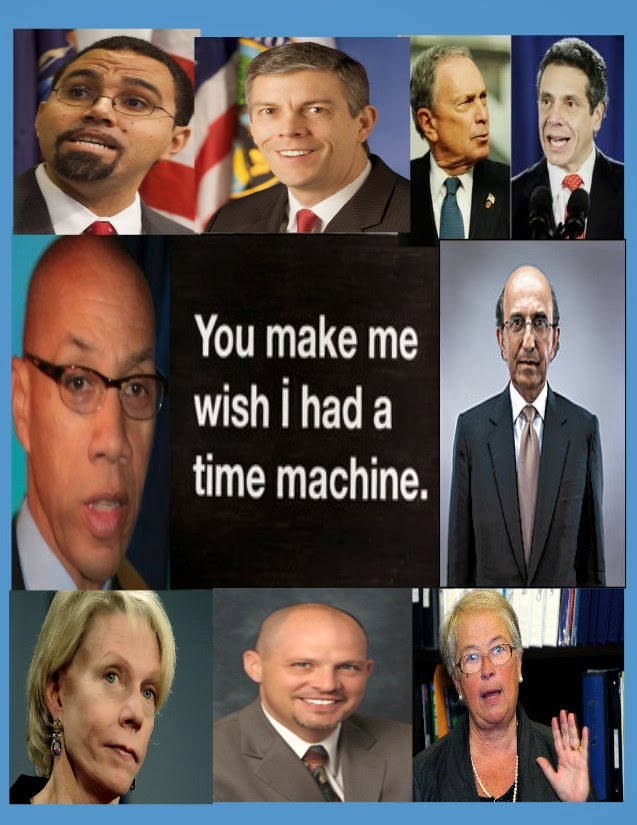 Secretary of Education Arnie Duncan:
"Hurricane Katrina was the best thing that happened to New Orleans Schools". This more than his equally stupid comment ny saying “white suburban moms who — all of a sudden — their child isn't as brilliant as they thought they were, and their school isn’t quite as good as they thought they were.”quip, resulted in many of his supporters to cringe and distance themselves from his out of touch education policies.

Chancellor Joel Klein: “The single most important factor determining whether students succeed in school is not the color of their skin or their ZIP code or even their parents’ income—it is the quality of their teacher.” and that "Poverty is no excuse as we have narrowed the achievement gap".  The NYC schools Chancellor said this as New York State kept lowering the passing cut schools to present the illusion of progress.  When the State cut scores were finally adjusted to reflect the actual academic skills, the racial/income achievement gap actually widened.  This embarrassment resulted in Mayor Bloomberg asking for Joel Klein to resign.

Mayor Michael Bloomberg: “If I had the ability, which nobody does really, to just design the system and say, ex cathedra, this is what we’re going to do, you would cut the number of teachers in half, but you would double the compensation of them, and you would weed out all the bad ones and just have good teachers. And double the class size with a better teacher is a good deal for the students,”    The Mayor was roundly criticized as there was pressure to reduce class sizes and educators were questioning diverting State money that was earmarked to reduce class sizes to other uses in the DOE. Moreover, in a NY1 interview he stated that "experience is not important when it comes to teaching".

Chancellor Cathie Black: "How about practicing birth control" when responding to a parent complaint about overcrowding.  In the very same meeting she said she has "a Sophie's choice" when it came to allocating space.

Chancellor Dennis Walcott:  "I have zero tolerance for teachers accused of sexual misconduct and they should be fired" then after making that statement he hires a person who was found guilty in a court of law of sexual harassment to be Principal of Flushing High School. In addition, when a Principal he liked was accused and substantiated by OEO of of repeated sexual harassment of his female staff, he kept the Principal in place and told the press “Just because an accusation is made doesn’t mean a person is guilty.”  Talk about a double standard, what a hypocrite!

Chancellor Carmen Farina:  " Its a beautiful day" when responding to reporters on why she kept schools open during a raging snow and ice storm that stranded many and put school children at risk. Honorable mention should be given to her comments to new teachers in which she said something to the effect "don't listen to those veteran teacher complaints in the teacher's lunchroom".

UFT President Michael Mulgrew: “So I stand here in support of this for one simple reason: if someone takes something from me, I’m gonna rip it right back out of their cold, twisted, sick hands and say it is mine. You do not take what is mine. And I’m gonna punch you in the face and push you in the dirt because this is the teachers, these are our tools and you sick people need to deal with us and the children that we teach. Thank you very much,” .  In reality most teachers would like to punch Mr. Mulgrew in the face for imposing Common Core on us and eliminating the joy of learning for their students and for agreeing to the "junk science" called the Value Added Method.

NYSED John B. King:  Telling the press that parents, students, and educators that showed up and complained about the poorly implemented high stakes Common Core tests were "special interests". Of course he failed to hold himself accountable for the faulty and flawed implementation of the State's teacher evaluation system and the high-stakes Common Core tests.

Governor Andrew Cuomo:   Who calls himself "a student lobbyist" while shortchanging the schools of education funds and forcing them to take the high stakes Common Core tests that brings out the student's fear and hatred of the test while taking the joy out of learning for these students. Moreover, he wants to hold education funding hostage over his insistence to impose a draconian teacher evaluation system and to fund more charter schools at the expense of the public school budgets. Making students pawns in his "its my way or the highway" policy is not being a student lobbyist in my book.

I'm sure I missed some and you can tell me what they are in the comment section.
Posted by Chaz at 9:57 AM

How about these conniving snakes (AKA, "field supervisors") who come around telling you, "I'm here to help you find your next position!" [as a Walmart greeter]?

Chaz be our nigga'. He speaks da' truth!

Walcott's quote was hysterical. I remember it clear as day when he said that comment. The principal he chose not to release was demoted and is now an ATR AP.

Yes, those field supervisors will help you find a new position..... bent over the back of a couch with your pants pulled down!

In late 2009 Joel Klein, while touting test scores, asked "whose blacks are on top". He remains the only person in the history of the internet to utter this phrase.

I love this post. However, I believe Michael Bloomberg really believes that class sizes should be doubled.

My favorite Bloomberg hire was Diana Lamb. She demanded to be paid as much as the chancellor. Then gave her unqualified husband a job in a grammar school.

Duncan...? Does that crash test dummy still have that job ?.

http://nycpublicschoolparents.blogspot.com/2015/02/cuomo-needs-to-support-public-schools.html
READ THIS LISTING
The link will bring you to a listing of Cuomos charter school donors. The interesting thing is that most of his donors are from the "sucess"academy charters of moskowitch and company. Amazing how many "executives" they have on staff and amazing how they all donated to cuomo with 10 thousand, 20, 30 and even up to 55 thousand from moskowitch herself.
Notice how coke bottle Klein even donated 10 grand to cuomo. So, he really did sell his soul to the devil eh? Wow, cuomo gets 10s of thousands of dollars and all of a sudden he becomes the charter school guru!!! You fregen cant make this up people...What a piece of crap and it is so clEAR he was bought $$$$$$ OMG