The Unity Caucus And The Borg Collective. 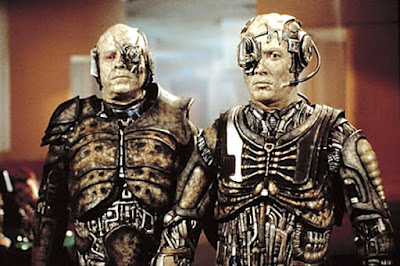 In the age of accountability, one of the more unaccountable organization is the UFT's "Unity caucus" who controls the union from top to bottom.  The "Unity caucus" has ensured that nobody can seriously threaten their complete domination of the union.  All leadership positions above the school's Chapter Leader are appointed by the "Unity caucus" leadership and even at the Chapter Leader level dissidents are challenged by a carefully selected opponent by the "Unity caucus" when they believe its in their best interest to win the seat. Yes, the very same  "Unity" leadership that gave us Dainelson, Common Core, APPR and declared victory at every step as teacher "due process" rights were being eroded away, piece by piece.

In trying to find a similar organizational structure I stumbled upon the one that best fits the "Unity caucus", its the Borg collective from Star Trek the Next Generation TV series!  Yes the scary, evil, and extremely dangerous organization who's mission is to destroy civilization, while assimilating their distinctive characteristics to make the Borg collective stronger and more powerful. Why do I think they are similar?  Let's investigate.

First, there is no independent thought in the Borg collective, all decisions are controlled by the Borg Queen.  When was the last time anybody in the "Unity caucus" voted against Randi Weingarten or Michael Mulgrew when they demanded that they vote in favor for their position?

Second, when a member of the Borg collective show independent thought they are expelled from the collective or re-assimilated as a more compliant drone.  When a member of the "Unity caucus" disagrees with the leadership, they are expelled from the caucus or re-educated not to object.  There are persistent rumors that all "Unity caucus" members will be implanted with a vinculum so that the leadership can instantly communicate internally with its caucus drones.

Third, all Borg are required to tell outsiders that "resistance is futile", while the "Unity caucus" has their own loyalty oath that must be followed at all times.

Finally, the Borg will disregard civilizations that don't have any distinctive characteristics worthy of assimilation.  While the "Unity caucus" will only recruit outsiders they believe will enhanced their control over the membership.  All other outsiders are unworthy of admission into their cult organization.

Yes, the Borg is here in the guise of the "Unity caucus" and to all you dissidents? "Resistance is futile".
Posted by Chaz at 8:32 AM

I laughed out loud when I read the title, but it's a pretty apt comparison.

I like a good Star Trek analogy as much as the next guy. One can say the UFT is Pon Farring the rank and file.

But I don't think Unity is only caucus with Borg like abilities.

Hilarious! Still laughing at the analogy.

Ed Notes is addressing issues related to the Unity/Borg machine. How they use District Reps to control.
http://ednotesonline.blogspot.com/2015/07/how-unity-caucus-uses-district-reps-to.html

Is Unity a Democratic Organization: Unity Caucus and Democratic Centralism - Unity is a Leninist Party.
http://ednotesonline.blogspot.com/2015/07/is-unity-democratic-organization-unity.html

I am a former chapter leader and served on a district executive board. I once belonged to the Unity Caucus but that ended when I transferred to another borough. I used to tell Social Studies teachers that the organization of the UFT was like that of the former USSR. The USSR had a party chairman, the UFT an elected president. The USSR had a Politburo, the UFT had its executive committee. Then there is the Delegate Assembly which I compared to the "elected" Soviet of the People. In the USSR there was only the communist party; the UFT had unity. In the USSR things came from the top leadership and the Soviet would be the rubber stamp. Sounds like the DA to me
Don't get me wrong - I taught in one of the worst Bronx community districts for 17 years and life without the UFT would have been worse than it was. I come from a union family. My grandfather was on the organizing committee of the TWU in the city and my mom, for many years, was a Telephone Traffic Union shop steward.
What has happened is that the UFT has seemingly lost direction. The leadership have allowed the creation of a sub class of teacher called an ATR but refuse to let them have proper representation. They gave away seniority transfers in one bargaining agreement and signed up for this latest contract bragging that it was a good contract.
I read in this blog about the failings of the UFT and am both angry and saddened. It is not the UFT that I knew. Unfortunately the media has made the word "union" a dirty word. How the UFT will counter, I have no idea. I will bet that in the next election Mulgrew will get re-elected - that's the way the Soviet, I mean UFT, works.

I have heard that the UFT had Communist roots and its no surprise that the Soviet model would easily fit into the UFT structure.

I don't think the design of the UFT structure was deliberately based on that of the USSR. A lot of unions have the same structure and the UFT is much more democratic than, say, the PBA.

I attended DAs thirty and forty years ago. There was a group of teachers who would, on occasion, actually stand up and sing old socialist songs from the turn of the century. It didn't happen often; I always found it to be good entertainment.

A friend and former chapter leader once came up with this observation - if a teacher's problem is something on the union agenda they will move on it. If your problem isn't in the union lens then you struggle on alone.

Have you read the loyalty oath that Unity members must sign?

It's proof-positive that the union = the USSR's Stalinist version of democratic centralism.