The Failure Of Our Union To Make Life Better For The Members Part II, The Contract. 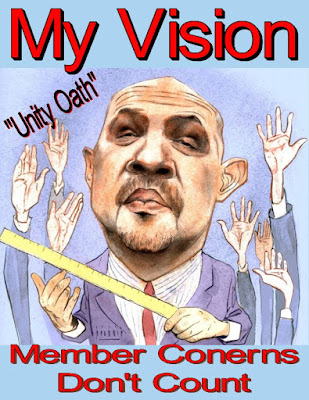 During the Weingarten/Mulgrew years the contracts negotiated by the "Unity caucus" has been short on money and long on "givebacks".  The recurring theme by both Randi Weingarten and Michael Mulgrew is that we did the best we could when it came to compensation but totally ignored the "givebacks" by stating that they were minor when it turned out they were significant.

The first contract negotiated by Randi Weingarten was in 2000 and the members received a 16.22% pay increase for three years (November 2000 to June 2003).  Sounds good?  However, it came out to 5.4% a year but inflation was approximately 3%, which gave the members an effective 2.4% raise annually.  However, for this raise, the 2000 contract contained a few significant "givebacks".  First, all members had to work an extra 100 minutes each week,  Second, the 3020-a process was revised and a New York City version no longer allowed for a three arbitrator panel for incompetence cases or allow the educator to reject an Arbitrator and formed a three team unit that hurt educator representation.  Finally, while not part of the 2000 contract, Randy Weingarten allowed the incoming Mayor Bloomberg to take control of the school system by agreeing to Mayoral control in 2002. That has worked well.

The second contract negotiated by Randi Weingarten was the infamous 2005 contract that gave us raises of 14.25% for 52 months or 3.75% annually, barely exceeding inflation (3.5%) while allowing for massive "givebacks".  Read them Here!  This terrible contract brought into existence the ATR , the lengthening of the school day by 37.5 minutes and the elimination of the seniority transfer system, while per session rates remained frozen. A year later the DOE imposed the devastating "fair student funding"and had Randi Weingarten objected, tje DOE would have backed away.  Instead the great appeaser refused to take it to PERB or court as a violation of the collective bargaining contract and allowed the ATR pool to explode with veteran educators as the new policy encouraged principals to hire the "cheapest and not the best teachers" for their school.

The third contract negotiated by Randi Weingarten was relatively benign compared to the other two.as we received a 7.1% raise for two years and gave back one significant item.  The establishment of the Peer Intervention Plus (PIP+) that turned out to be termination program for teachers accused of incompetence with a 90% or greater termination rate.  Also was the expansion of the probable cause statute that allowed the DOE to remove educators who were arrested for fighting and other potential ferlonies to be taken offline without pay or health benefits for 90 days.

The final insult Randi Weingarten left us was the reduction in our TDA from 8.25% interest on our funds to 7% in the fixed allocation for the retaining the two days before Labor Day that Randi gave up previously in the infamous 2005 contract. For another take read my post.

Michael Mulgrew's first negotiated contract followed in the footsteps of Randi Weingarten by getting an inferior contract that is short on compensation, 10% for seven years and one month or a 1.38% annual raise!  Yes he got back our two 4% raises but most of it will be given to the members between 2017-20 and members who resign or are terminated do not get it.  In turn, he agreed to make ATRs second class citizens with reduced "due process rights".

With the "Unity" caucus negotiating our contract look for future contracts that are short on compensation and long on "givebacks".

What's incredible to me is that Randi was promoted to AFT president. How can she have a history like that and be given a promotion? Any one ever wonder how she became UFT president in the first place? No credentials.
In 2005, she wouldn't met with Bloomberg, then has a secret lunch with him and came back with the 2005 contract. It allowed the dismantling of the schools by taking away seniority rights.

I want both Randi weinothing and Michael Mulshit back in the classroom teaching. Enough of this. I am getting hammered every day. Unreasonable demands. Kids who are out of control. Administrators who blame everything on teachers. Enough of this. These two are laughing collecting big bucks and are doing nothing. Maybe if they actually had to teach they would actually understand what teachers really have to go through. Time top vote them out and put someone who understands the true realty of what is going on into office.

It's almost time for all of us to get out. 2-3 years and its over. The signs are everywhere. Make your plans now.

At Lehman HS in the Bronx, Legionaries disease was found. Parents and students were informed, but not the teachers! When I retire I will never, ever set foot in the Bronx again.

Randi was more of a man than most of us.