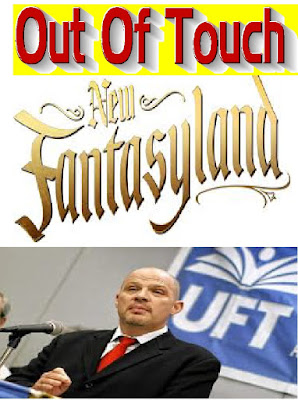 "There is a growing momentum and motivation in the schools"

Mr. Mulgrew pointed out how only 21.7% of "newbie teachers" left the schools within three years in 2010-11 school year compared to 33% who left in the 2005-2006 school year.  What Mr. Mulgrew deliberately left out was that the 2010-11 school year was in the depths of a recession, while 2005-06 was a year of relative prosperity.  Of course many teachers stayed in the profession because of lack of jobs during the recession.  My question is how did the numbers change over the last two school years as we escaped the recession with an ever improving economy?

How can Michael Mulgrew claim that things are better in the schools?  Has he even bothered to talk to classroom teachers outside his inner circle of cronies?  I doubt it.  NYC Educator posted a similar article on this issue and is a must read. Let's look at the issues that Michael Mulgrew chose to ignore and why nothing has really changed when it comes to the teachers in the trenches.

First,  Chancellor Carmen Farina stated that 400 Principals should not be running their schools.  However, only a handful have actually been removed and only when the media gets involved like at John Dewey High School.  Why is Michael Mulgrew silent about Namita Dwarka of William Cullen Bryant High School who destroys careers of veteran teachers and hurts the students of the school?


Second, why hasn't Michael Mulgrew use his influence with Chancellor Carmen Farina to eliminate the "fair student funding" that forces principals to hire the "cheapest and not the best teachers" for the schools? Does he really care?

Third, Why did Michael Mulgrew make ATRs into second class citizens with reduced "due process rights" and no mutual consent?  How do you think their morale is?  I guess under Michael Mulgrew "the beatings will continue until morale improves".

Finally, most teachers despise the Common Core and the junk science that goes with it but if you oppose Common Core and its badly flawed implementation, Michael Mulgrew will punch you in the face.

While Michael Mulgrew's love affair with Chancellor Carmen Farina continues its still a very hostile classroom environment for the teachers but you wouldn't guess it listening to our UFT President.  To Michael Mulgrew its fantasyland where all good dreams come true while its a never ending nightmare for the teachers in the trenches.

Mulgrew is completely out of touch. It will cost him one way or another. I will vote for anyone and I mean anyone who isn't affiliated with him and his Unity party. People need to get over their differences and vote these bums out. I want out of this dismal profession, with my sanity intact, as soon as possible.

Sorry Chaz, I just had to let it out.

Please resign and seek the Chancellor's job, you are the worse UFT president that ever existed.

If he does not know how to do his job, then he should be voted out.

Wait til the Friedrich decision.

F'in Quisling Vichy just like Randy.Lynching is too merciful for these POSs!Give Portelos a shot!

I've been assigned to a school (until October 16th , where the new AP (former network person) has assigned me to "support" three classes "in my subject/ license area". Interestingly enough, the student's' programs list these classes as English courses. On the first day I expressed concern about this program, since according to the students' program, it's out of my license area. she says, "Don't worry about it, just work on vocabulary with them. Since then, I've gotten various e-mails reminding me to complete a syllabus and units for these classes. How does support the teachers with vocabulary become classes with all of the responsibilities of a permanently assigned classroom teacher. Another thing, the administration requires that the entire teaching staff sign in on a sign in sheet AND clock in everyday. Who's ever heard of such a thing???? I can't wait to go back into rotation!

One ATR with me is being sent on kindergarten teaching interviews- he has a high school license. Another one is being sent on ELA interviews, he has a Math license. The third ATR with me has been told to teach biology - he has a special Ed /social studies license. He has to write lessons, unit map, etc. for a subject he knows very little about (he never took it in high school or college). Can someone tell the two Bozos that are supposed to be representing us to return a phone call or email?

10:12—
It is illegal for them to make teachers clock in. They can do other stuff, but unless you are on some discipline plan, they can NOT make you punch in. Call union. This is something (one of the few somethings) that usually pisses them off.

At Bronx Theatre in the Kennedy Campus they demand only ATRs punch in and out. If you disagree they will set the principal's PitBull Marika on you.

What school? That's not allowed.

I sent this email.

Please tell us if it continues.

Please be advised that it is improper for any teacher, permanent or on rotation, be required to clock in or out unless they are on a disciplinary plan.

"Teachers were once required to punch in and out with a time clock, but the UFT won the elimination of that vestige of factory-model teaching in the 1990s. Today, the principal must consult with the UFT chapter committee and establish alternate procedures for keeping track of staff attendance and lateness."