Is Andrew Cuomo's Pivot On Teacher Evaluations Real? I Don't Believe It Is. 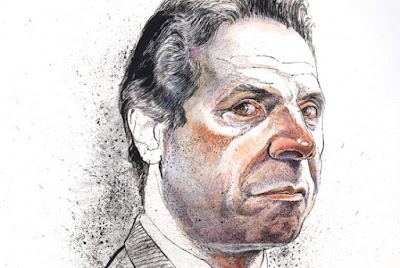 Last week, Governor Andrew Cuomo, after seeing his poll numbers plummet and his education agenda under attack by parents, teachers, and School Superintendents, has apparently made an about face on tying in teacher grades with student growth.  The Governor's apparent change of heart was the ever growing "opt out" movement that saw 20% of the students Statewide, boycott the high-stakes Common Core tests.  Worse for the Governor was the 50% "opt out" rate in solidly middle class Long Island communities and 40% in the suburban  upstate communities.  Finally, the shocking realization by the Governor that 75% of the parents who "opted out" their child, objected to the teacher evaluation tie-in to these Common Core high-stakes tests.

The question is he serious about reducing or eliminating the teacher evaluation tie-in to the student growth scores?  I believe he is not. This is only a ploy to defuse the highly embarrassing "opt out" rate of the State's students that some believe will approach 50% Statewide and could go higher if the UFT and other large teacher unions push the issue.  I believe the Governor is just blowing smoke and has no intention of changing his much criticized education agenda.  Sure, there will be some minor tinkering and more flexibility in the teacher evaluation system.  However, once the March-April testing period ends,  watch as the Governor refuses to significantly change the more punitive part of the teacher evaluation system, that is the 50% grade, based upon those tests will remain unchanged.

If the Governor was serious, he would ask the Legislature to make the changes rather than continue with his committees who only make non-biding recommendations that the Governor will either accept or ignore,  Furthermore, in an interview with an education reform group, he expressed his continued support of a more punitive teacher evaluation and his tone was about punishing teachers rather than improving student academic achievement.

Is the Governor just blowing smoke to try to defuse the ever growing "opt out" movement or is he finally realizing that going after teachers and their unions hurts his poll ratings and alienating the middle class parents, the mainstay of the voting system, could result in his losing the Governor's Office and any other elected position he runs for.

While I am hopeful that Governor Andrew Cuomo has finally seen the light, my gut feeling is that his pivot on the teacher evaluation system tie-in is simply a ploy to defuse the "opt out" movement  and will fight tooth and nail in defending his education agenda.
Posted by Chaz at 7:10 PM

Two points: 1) There will be no permanent "change" to the evaluation law unless the legislature puts the amended law on Cuomo's desk. 2) I am at least thankful that come next year there will most likely only be two observations for teachers in NYC. (One by the principal and one by the independent evaluator) I have been sick and tired of 4 observations for past few years and am looking forward to some peace of mind come September in this area.

Every morning Cuomo gets up and opens a window to see which way the wind is blowing. He is just another cheezy politician.

Chaz question regarding the pending law suit friedrich vs california and union dues. The question is if the decision goes against us does that mean the DOE can hire non union workers?? Will the NYCDOE turn into a success academy environment with all non union scabs and a mentally disabled leader?? I have attached a letter from a former success academy teacher who quit and has blown the whistle on this mysterious operation known as success academy charter schools run by non other than a mentally ill leader and we all know who she is:

Why I Left Success Academy
http://dianeravitch.net/

The Scorpion and the Frog

A scorpion and a frog meet on the bank of a stream and the
scorpion asks the frog to carry him across on its back. The
frog asks, "How do I know you won't sting me?" The scorpion
says, "Because if I do, I will die too."

The frog is satisfied, and they set out, but in midstream,
the scorpion stings the frog. The frog feels the onset of
paralysis and starts to sink, knowing they both will drown,
but has just enough time to gasp "Why?"

Replies the scorpion: "Its my nature..."

We know who the scorpion is in this story. So let's not take a chance of being stung by this predatory arachnid.

We keep huffing and puffing about the Governer. But, he's just a figurehead. The only ones who can change the law are the Assembly members. Time to hold them accountable for voting for this in the first place. Our union gave them the green light, but, they should have known the UFT doesn't really speak for us. We need a grass-roots effort to unseat them (our union won't do it).

Let's circulate a list of every assembly person who voted for the APPR bill, and include the date of their next election. Let's go after them by circulating this list in social media. If they want to hang on to their seat, they better introduce and pass a bill to *completely* unwind this shit.

@ 5:38, are you positive about the 2 observations starting next September? If love that BUT how do you know this? I've heard nothing about this model of observation as a guarantee. Have you heard something or it's a hopeful guess?

The rule is at least 2 so your admin can come in as often as they want.