The DOE Expects Miracles But Fails To Support Teachers. 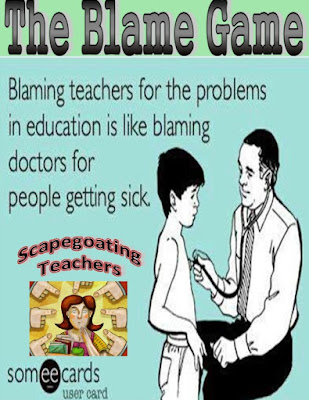 No matter where one turns to, the newspapers will blame teachers for the failure of the schools.  Just look at the pounding the renewal schools are subject to and even the untrustworthy Hillary Clinton has demanded that below average public schools should close, putting teachers out of work.  It matters little that many of the students enter school, especially high school with Math and English skills many grades behind.  Some are functionally illiterate.  Yet the mass media expect the teachers to perform miracles and close the academic achievement gap.

While its understandable that the mass media blames teachers for the student shortcomings since they are overly influenced by education reformers and don't understand how the classroom works. Its different when the DOE and school administrators expect the same thing.   Many of the "ineffectives" and "developing" ratings are given to teachers of "high needs" students.  Many of these students are level one with issues.  Yet the DOE and school administrators expect teachers to perform miracles and raise them to a level that is unattainable.  Sure, a "quality teacher", can make a differences on the margins but most student's academic achievement is based upon social-economic factors such as family, poverty, community, and friends.  A teacher can contribute between 1 and 14% for any one student's academic growth.  Yet the DOE and the school administration give us unrelenting professional development on how we can raise student academic achievement and when it doesn't work, the blame is put squarely on the teachers


Instead, of reducing class sizes to a imaginable size, providing students with disabilities with a self-contain classroom setting,and proper support services,,  or provide the resources needed to help a student succeed. the DOE and the school administration holds teachers accountable when these students show little academic growth.  They use the Danielson rubric as a punitive weapon against the teacher and any appeal of an adverse rating to the DOE is almost always found in favor of the school administration.

Nationwide there is a teacher shortage and its only a matter of time before New York City will be  having difficulty in hiring certified teachers, especially in the STEM areas.  Already education classes are down 50% in colleges that offer such a degree and many education graduates never see the classroom as they go into the education policy field instead of teaching.  One would think the DOE would be making life easier for the classroom teacher, instead they have made the already hostile classroom environment even more toxic and in the last three years have seen a mass exodus of teachers resigning, retiring, or terminated by the increasingly difficult teaching environment in New York City, thanks to the DOE and the school administration.
Posted by Chaz at 2:05 PM

Everything you just said is why being an ATR is where you want to be esp in,the last few years like me with 3-4 to go Im in the red zone and gonna stick it in with no time left, no time outs remaining, no TV time outs,2 minute warning, no half time show,every second ticking off counts,theres no instant replay,do do overs, they cant say,"Replay second down"nope, every day is another pension credit, they cant stop the clock all this vacation time counts too everybody hang in there youll make it

After what I've experienced the last ten years in the DOE, I would never advise anyone to go into teaching. I'm a great teacher. I care. I plan great lessons. Everyone from students and parents to fellow staff and even Admins is satisfied with my performance. I get no complaints. Yet day in and day out I constantly am made to feel that my immigrant students are not Einsteins because of...me!

The fact that they are in high school but are basically equipped with 3rd grade skills (no joke) is never addressed. The fact they most are here illegally and have the stresses associated with that is never spoken about. The fact that they can't speak English and are often illiterate in their own native languages is swept under the rug.

I would love to see Michelle Rhee, Bill Gates or Arne Duncan make miracles from that skill set! Danielson's is a poorly thought our crock for nit-picking pencil pushers. The Common Core is a disaster, and really poorly thought out by a bunch of elitists divorced from reality.

Teaching today is a thankless job and new teachers have pensions that are substandard. Why spend the years of study and money and loans to get a job that you could be fired from for no logical reason? Better to go be a mid-level manager somewhere where you will be respected and valued.

I have less than ten years to get to the magic 55. I won't work past that, reduced pension be damned! I wonder if I can make it in this new climate where anyone over 35 is 'too old' to teach.

There is systemic discrimination going on in the DOE, they keep pushing veteran teachers away.

They don't want to educate inner city kids. They make believe they have been educated and send them off to college with a third grade reading level. They could care less about a teacher shortage- go buy Rosetta Stone, like Farina told parents the other night when they complained about French classes being cut. It's all a façade.