Sometimes Our Union Does Protect Their Members. 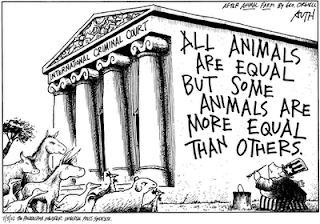 I have been extremely critical of our union leadership and rightly so, as they seem to care more about their political views than what's important to the members.  Examples were the inferior contract to make Mayor Bill de Blasio look good, the support of the APPR that no sane teacher likes or wants, and our President's active support of the destructive Common Core.  Furthermore, lets not forget how our union failed to support the "opt out" movement.  However, for once, our union leadership stood up for the staff at one large campus where the DOE tried to force the staff to enter and leave through one set of doors with the campuses students, a real concern and a safety issue.  Yes, the same old DOE that is permeated with the Bloomberg ideology, that treats teachers like unwanted orphans rather than the professionals they are.

The DOE and the four school administrations at the campus decided, without staff input or safety considerations,  that all staff, with the exception of school administrators, would enter or leave the campus through one set of doors.  It mattered little to the DOE that the school administrators carved out an exception for them and granted themselves access to a separate set of doors near the small parking lot that they parked in.    This was not only unfair, but violates the UFT/DOE contract.  Thanks to the union, a grievance was filed about the punitive and unfair treatment to staff that deprived them access to the staircases in and out of  main parking lot and required staff to squeeze through one set of doors with the students.  The DOE, faced with a potential defeat that could affect all schools, decided to compromise with the campus staff and reopened the doors to the staff parking lot for all campus staff.

Special thanks is afforded to UFT Borough President Rona Freiser, Special Representative Washington Sanchez, and the campus Chapter Leaders who filed the safety grievance and forced the DOE's hand that gave the campus staff back their parking privileges and staircases that makes it more convenient and safer for all staff.  Admittedly, without the support of the Queens UFT leadership this victory may not have happened and I applaud them for supporting the campus staff in maintaining our rights.
Posted by Chaz at 4:57 PM

Is this a joke?unity fighting for its members?

Noooo! Queens UFT is trying to save itself as they messed up a lot this year!!!

Kudos to Rona and Washington. Is there any reason why the school can't be named? What genius principal thought this was a good idea?

The media has done a job against ATRs. Check out some of the comments on Chalkbeat http://ny.chalkbeat.org/2015/11/25/11501-reasons-were-thankful-for-longtime-reporter-geoff-decker-whose-last-day-is-today/#.VmLyoFIo6SE

Maybe the union acted like a union in the scenario because of the possibility of losing dues money. The Friedrichs case most likely has the union worried.

Notice how that article alludes to him being an ATR, "teaches at various schools around the Bronx". Perhaps if it called him an ATR the readers may get the notion that not all ATRs are evil villains. More teachers need to start sueing when they are unjustly charged.

The whole UFT Queens office should pack their suitcases and leave.for good. They are useless.

Not only that our Union has turned their back on.us, they collaborate with abusive principals like Ms..Dwarka by letting her know any legitimate complaints from its members.

How can the city pay a 6 figure sum to a teacher for a principal's malfeasance and leave that principal in that position? I'll tell you why, because if they removed her she could sue on the fact that all principals are doing the same thing and the DOE is aware of it.

Not all principals are doing the same thing