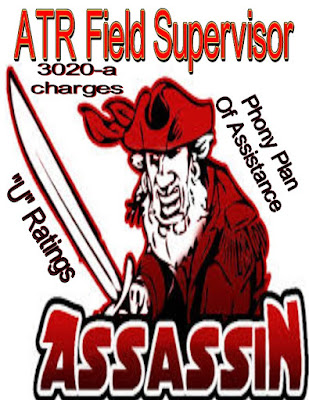 Quietly, and with little publicity, the DOE has issued new guidelines on how field supervisors (assassins) can recommend to the Superintendent that the "U" rated ATR should be subject to the 3020-a termination hearings.  Previously, the guidelines contained language how field assassins were required to help support the ATR in their pedagogy and assist them in obtaining a position.  The reality was the field assassins offered little or no assistance and are useless in helping ATRs obtain a position.  At best the field assassins were just an inconvenience and at worst were there to "U" rate the ATRs and encourage them to resign or retire.

This year, for the first time, selected ATRs who received two consecutive "U" ratings and who had previously gone through the 3020-a process were served with their 3020-a termination charges for incompetence.  These carefully selected ATRs were the test cases to see if the State arbitrators would terminate these ATRs, based upon flyby observations in classrooms where the ATR did not know the students, had no ownership of their grade, and had no clue if their students were ESL, had an IEP, or were academically on grade level.  So far, to my knowledge, the State arbitrators have not terminated any of these ATRs and have questioned the fairness of the "U" ratings and the lack of real support givin to the ATRs.  While most of the test cases have not resulted in a verdict, the majority of the ATRs appear to have escaped termination.  Thanks, in large part to the field assassin guidelines.

However, starting this semester, the field assassin guidelines have been changed to help the DOE terminate ATRs.  The revised guideline now states the following: 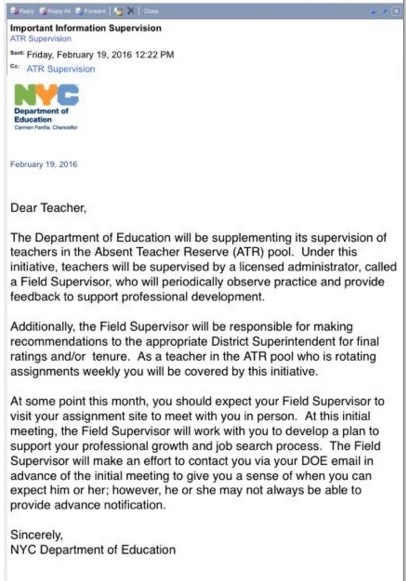 Take a look at the second paragraph that allows the field assassins to recommend termination to the Superintendent.  This is a change from the previous guideline that did not include this paragraph and only contained information supporting the pedagogy and placement of the ATR.

The question is was the UFT complicit in this ominous change in language?  Of course they were!  The fact that the UFT leadership has remained quiet about this change tells everybody that the UFT has agreed to this guideline change to terminate more ATRs.  If the UFT leadership had opposed it, they would have put a stop to it since the DOE and UFT must jointly approve any changes in the ATR agreement as implemented in the June 2014 contract.

For the ATRs its bad enough that the DOE wants to terminate us but it seems the UFT leadership is helping the DOE thin the ATR herd by stabbing us in the back.  Thanks, to Betsy Combier who first alerted me to the change in the DOE policy to help terminate ATRs.
Posted by Chaz at 8:57 AM

ATRs,
You weren't supposed to find out about this! Mike said you guys were way too dumb! I guess I'll redirect all my calls to Mike Sill for the next 4 months. He better not plug out his phone!

See you at my annual meeting in September,
Amy

P.S. Why don't you all just quit or retire? It would make things sooooo much easier for me, Mike, Bill and Carmen.

How many ATRS have been terminated?

Your question should be given to the UFT leadership since they have the statistics and have failed to make them available.

Why does it say termination?

To 1:57,
Please contact Mike Sill at your earliest convenience. If he doesn't answer the phone or there's no voice mail, try another time. Please remember I'm working hard to get ATRs restroom keys. Let's try to remember this paramount issue. Next you'll be asking for an ATR chapter, again! (Why would you need a chapter when you have me and Mike protecting your rights?)
Amy

You have to call Mike Sill all day long, at different times. Each time, no matter the hour, all you get is voice mail. If you are especially persistent, you are "honored" with a call from his part time lackey, one "Haj", purported to be an ATR himself. We have no idea of how much training or authority this "Haj" person has. He is the ONLY ONLY ONLY contact with Mike Sill you get after days of calling or emailing. He is the human bone Mike tosses to get you off his back. You never get to speak to Mike Sill himself. He must have more important things to do, like planning his next vacation on OUR dues money.

My field assassin has been showing up with another field assassin, double teaming me at each observation. I never heard of someone being observed who did not get to choose which day, which class period, etc. This past Thursday I was observed in a class whose regular teacher hasn't been there for a long while (always a great situation) which was dictated to me. I had no choice. She even made me sign a statement that I received notification that I would be observed on such and so a date, such and so a period, in such and so room.

Of course, teaching a class with students who you know nothing about cannot be expected to go as smoothly as students you see every day. There will be disciplinary issues that throw you off schedule, such as telling students to be quiet or to take out their notebook or to put away their phone. There might be some special ed students who are very slow to complete a task you need done before you can go on. And so on. So you can plan a lesson with a certain amount of minutes allotted for each part, but it's very difficult to keep exactly to that time schedule.

At the end of the period this past Thursday, the field assassin CONFISCATED half the worksheets I had handed out, just grabbing them forcefully out of my hand. She wanted to make sure the students had actually filled them out. Most of them (in the fleeting glance I had at them) looked to be filled out, at least on one side. What would possibly compel the students to fill them out at all, for someone perceived as a sub? And why should I be held responsible if they were not filled out? You want to fail, it's a free country. If the students did not choose to complete the work for someone who has NO leverage over them, who they perceive as a sub, how can that be blamed on the teacher? But I know it will...

Certain things about this give me pause:
1. We have a contract, with ATR provisions, that remain in effect until June.
2. The UFT never notified anyone of changes.
3. The UFT silence speaks volumes as to it's complicity. A union doesn't secretly scheme with an employer to eliminate its most senior work force.
4. There should be a full explanation to all ATRs by the UFT explaining this. It certainly appears discriminatory.

So Mulgrew is covering up ATR termination stats? Not possible, Chaz. I know for a fact, because the story was in NY Teacher, that Mulgrew proposed a Truth Commission at the Spring Education Conference in '13. How rotten a scoundrel would he be, if he now withholds the truth about ATRs?

I am not an ATR - yet. As a tenured teacher in a 'failing' school, I know that any of us could be ATRs at any time. It doesn't matter how good you are, the DOE is an alternate universe of injustice, illogic and perversity. The bullies that sit on our heads are unbelievable!

I see no future in teaching, even though I'm very good at it. Reformers want McDonald's style teachers, not realizing few will invest the years and money in a watered down at-will essentially temp position. Those who manage to squeak by a few more years are advised to use this time to build alternative modes of income: stocks dividends, rental properties, etc. Ten years from now teaching will be a dead career.

How can anybody defend the UFT on their failure to protect their members. Yet, I run into clueless teachers who by the kool-ade that the UFT has the ATRs back. Lust incredible how ill-informed teachers are to the facts.

If UFT Solidarity wins we will reverse the figures of the field supervisors.

If the UFT get dues from an ATR or a newbie, is it not still dues? If the dues be the same, what matter it comes from new or old? Would dues by any other name not smell as sweet? Out, Out, damned ATR!

Field supervisors are working hard to get rid of older teachers.

Seems about the same to me. The ATR supervisors have been recommending 3020a for years to Superintendents. The fact that tenure is even mentioned as recommendation is a complete fabrication. As a former DOE teacher who was a non tenured ATR I can tell you that there is no way they are granting tenure to anyone. If anyone knows someone who was tenured in the ATR I'd love know lol.

You do not need two consecutive years for 3020a. They can initiate those charges at any time. I was brought up on charges from a school year I received an “s” in.

When brought up on these charges, they try to make a list of infractions you illegedly committed. In terms of the atr(in my case) the charges never grow out of pedological reasons but classroom management issues.

It is very sad that after investing thousands of dollars in a career our employer, the doe) sees it fit the despose of professional people like you would toilet paper.

Even when the atr secures a position non is garanteed permanent and these positions are usually difficult to obtain.

I am happily retired now but I can never forget how I was treated after devoting my youth and entire life in the persuit of educating children in nyc.

And our union does nothing. Mulgrew has the nerve to stand there smiling with the enimy. And I think UFT elections are rigged. We need the leadership once experienced in the 1960s and 70s when teachers went on strike to improve working conditions for its members. Too bad we can’t have Peter Lynch. There’s a leader.

These Field Supervisors are a sham. What do they think that we are stupid? The UFT is helping the DOE to push experienced teachers out.