Academic Fraud Continues At Some Schools And The DOE Does Not Little About It. 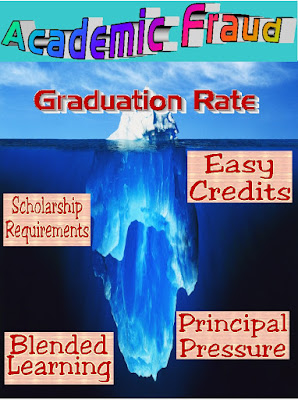 After delaying for six months, the DOE finally released information that 30 high schools violated State and City "credit recovery" guidelines and allowed students undeserved credits to jack up their graduation rates. What discipline did the DOE impose on the school administration?  None, that's right, not one school administrator was disciplined, no Principal was fired, fined, or even given a letter to their file.  Of the 30 high schools cited, only 10 will be monitored by the DOE (ha, ha) to ensure they don't violate the credit recovery regulations in the future.

Acade4mic fraud in the New York City public schools has not been eradicated but continues to thrive as principals have little to fear if they get caught "gaming the system" as the DOE rather put "lipstick on the pig" then take real educational action for the alleged abuses. Maybe, if the DOE took seriously the many educational abuses found in the schools rather than protect school administrators, we would get a true picture of the student academic achievement at each school.  Instead, we end up with highly inflated and bogus graduation rates where over 3 out of every 4 students need to take no credit remedial courses in college and far too many drop out before getting a degree.

Chaz one day you'll stop writing on this blog and actually enjoy other things. No one cares about credit recovery, illiterate principals, fsf, changing of grades, class sizes, etc. No one cares. I mean, you care and about a dozen (give or take) others out of the 75,000 other teachers in NYC actually do, so that's cute. Everyone knows it's DOE Survivor Series and you stay on the island by following certain techniques. Other than that, your articles were the same 5 years ago and will be the same 5 years from now. You can try to respond to my comment but in the end, the truth is that the system is just too big, too corrupt to manage. This isn't Tuckahoe, New City, or Glen Cove. This is NYC and the 1.1 million children under 1 single chancellor can never work. Until real measures are taken to reduce numbers so it's not so overwhelming like:
Breaking the boroughs into 5 districts with 5 chancellors(which is a start to reduce all aspects of anything) is).
Your posts become repetitive and head shaking because NO ONE CARES. In smaller settings like districts with smaller numbers, THERES NOWHERE TO HIDE. You can easily hide in NYC. You can't hide in Bronxville.
Beautiful day at Jones today buddy. How can you think anything will change by "exposing" cheating or recovery. It's not a big story. If I didn't see it on here, I wouldn't see it because the news could care less. It's just a shame because of course you are correct, it's just you're in the wrong place. Nothing can be accomplished here. However, we are all in the 6 figures now for working 180 days out of the year.

are they going to name the schools-- both parent and teachers need to know.

The fish is rotted from the head down..that's why people will vote for Trump.

Where is the union? Mulgrew should work in one of these schools and see how he performs.

Anon 3:01. So lets not say anything and ignore all the bullshit going on. According to you no cares and it's pointless giving negative exposure to the DOE.

Question though, what prompted you to come on this blog in the first place???

Let's not lay all the blame for false grades on Fariña, superintendents, and principals. Teachers are guilty, too. After all, we go along to get along with corrupt administrators and we're the ones who fill out the criminal report cards. Randi's and Mulgrew's hands are dirty, too. They have never warned their members against cheating or encouraged whistleblowing, nor have they sought immunity for intimidated teachers who would come forward if they did not fear prosecution. The DOE's no immunity policy enforces silence and guarantees cover-up. Last year I had the guilty pleasure of telling Fariña that she was "the Beverly Hall of the DOE and New York the Atlanta of the North." Showing consciousness of guilt, she did not respond.


As I told Farina last year: "You are the

Dishonest and abusive principals like Dwarka should be removed by now. These principals are causing so much damage.

People who know me will tell you I am a real teacher.

Some of these abusive principals should be facing the justice system, it is shameful.