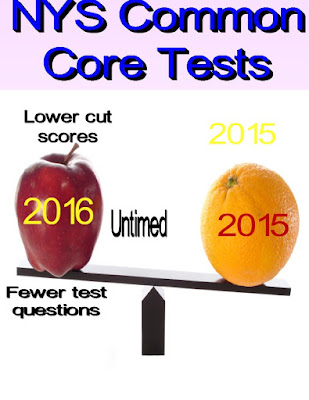 With great fanfare our inept Mayor, Bill de Blasio, and our disappointing Chancellor, Carmen Farina, hailed the academic improvement of the New York City students.  What was left unsaid was that the 2016 tests were radically different from the previous years.  The 2016 tests were shorter, with less questions, and more importantly, there was no time limit.  Furthermore, because of the large "opt out" numbers in the higher achieving middle class suburbs the cut scores are lower.   NYSED commissioner, Maryellen Elia even stated that this year's test was "not an apples to apples comparison" as she told the New York Post.  Furthermore, the esteemed CUNY education professor, David Bloomfield said the following.  "The increases are illusory.”


Unfortunately, real academic achievement has not been demonstrated by the badly flawed and manipulated high-stakes State tests.  In fact the NAEP national test, the gold standard, has not shown any improvement in student academic achievement since 2013. Therefore, the 2016 State tests are probably invalid as a meaningful measurement to show real academic gains.  Read the NYC Parents Blog for a clearer and more complete analysis of the State test flaws.

Let me give you a real world example, if you were a chess player and played chess with and without a clock  which game would you fare better in?  The game without a clock of course since there is no time pressure to contend with..  The same goes for the State tests, the students are bound to do better without the pressure of a time limit. Moreover, the fewer questions also contributes to higher student achievement, especially when the State once again lowered the "cut scores".  Finally, teachers were given more test preparation materials and were better able to concentrate their test preparation instruction.  This is especially true in the charter schools where the majority of the day is concentrated on the English and Math test preparation.  Therefore, it's little surprise that the charter schools had relatively large increases in the badly flawed State tests.

The bottom line is that the NYS high-stakes Common Core tests are badly flawed, manipulated to meet certain political goals, and are geared to test preparation rather than real learning.  Consequently, these State tests and have no validity when it comes to real academic achievement.

Chaz, I love your chess game comparison and I concur with your conclusion.

1. My checks keep coming
2. My TDA earns 7% guaranteed
3. My kids and wife and I have unlimited Doctor/dentist benefits
4. My high school finishes at 2:20pm from Wednesday's - Friday's
5. My dress code is track pants, t shirts, and sneakers

I'm glad you enjoy your benefits but how about the horrible working conditions and disrespect many of us expeirence? That does not count?

1. Administration from hell
2. Student disrespect and insubordination
3. Horrible classroom environment
4. Danielson
5. Only 33% will every be vested for a pension and less for retiree health benefits
6. The stress and antidepressants many of the teachers are on to simply survive the day.

Look at the long-term, not a pleasant picture is it?

Nobody gives a fuck our dues go up another $2 on the next check? They are supposed to go up when salary goes up.

What exactly is your point?

Regarding dues - the UFT has some kind of algorithm to calculate dues. I remember something about the dues being calculated from the citiwide average median salary. So that means step increases are counted. There doesn't have to be a cash raise for the dues to go up.

Maybe Chaz can check it out.

I write in to pretend I'm making big bank at a piece of cake job. Just like some guys pretend they are Derek Jeter, I pretend I'm a rich teacher. Next week I'm a pretend dentist carting home the loot. After that, I'm the Queen of England. All in my mom's basement. Gotta go count my coin.

I thought I read based on top salary, which didn't go up.

I think anon 1:12 is a gym teacher. I may be wrong, though. I don't think gym teachers experience the stress of those in the classroom. If anon 1:12 isn't a gym teacher, then I question how seriously he/she is taking the job given his/her work clothes. If one doesn't take the job seriously, then I guess there's nothing to be stressed about (which isn't the case for many teachers).

I think that I'm always doing what I'm supposed to be doing in the classroom; however, with Danielson, an administrator can just pop in and note that I'm not using the proper questioning technique (when the administrator might have just missed that part of the lesson). And then it's an "Ineffective" for an informal observation.

Chaz - your blog is very informative and helpful. I've learned so much from reading your posts. Thanks!