Chancellor Carmen Farina's Report Card Is A "D" For Disappointing. 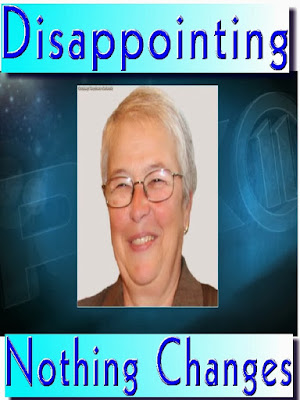 Its been two and a half years since Carmen Farina took over the New York City Public schools as Chancellor and she continues to be a disappointment to the students, parents, and teachers of our school system.  Let's look at why the Chancellor has maintained her disappointing "D" rating.


First, the good things she has done,

Eliminated the useless and money sucking Children First Networks and gave the Superintendents  back the power they need to effectively run their schools.  However, many of the Chancellor's selections to be a Superintendent must be questioned, be it Juan Mendez or Amiee Horoiwitz.

Require seven years of school teaching and administration before graduating from the Leadership Academy to become a Principal.  However, she has apparently carved out some exceptions already.

Carmen Farina has shown that she supported the continued attacks on teachers as her 3020-a numbers are similar to when Bloomberg was Mayor.  Moreover, she has told new teachers not to listen to the older teachers in the teacher's room.

The ATR pool has remained relatively unchanged since she became Chancellor and she is more interested in firing the ATRs than placing them in schools.  Just look at the 2014 contract that made ATRs second class citizens and even tried to overreach by pushing some into expedited 3020-a hearings.

Chancellor Carmen Farina continues to support "fair student funding" (fsf) and to make matters worse, the average school only received 86% of the fsf allocated to the school.  Worse, the Chancellor's budgeting shenanigans has resulted in the school;s forced to hire"the cheapest and not the best teachers" for their school.

The Chancellor's failure to remove bad principals after telling the media their are 400 principals who should not be running their schools.

The lax student discipline code that has made schools increasingly unsafe for all.

The bottom line:  Chancellor Carmen Farina gets a grade of "D" for disappointing.
Posted by Chaz at 6:53 PM

For me the worst thing is safety. As an experienced educator she has to know the current (non) discipline policy is dangerous and she's not the one to blame. It's coming straight from Bill. The other stuff is straight from the Bloomberg/Klein regime, of which she was a high ranking official. Obvisously she agrees with those policies, because they are still in effect. DeBlasio is being blamed in the media for some of those school policies and principals, that are in fact Bloomberg's. It doesn't seem like he or Farina care one way or the other - our Union certainly doesn't. There's no real push to end the ATR pool, remove abusive principals, lower class sizes, restore discipline (not Resorative Justice) or change the status quo.