Here's The Problem Randy Asher Has In Placing ATRs. 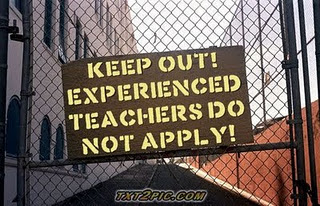 In the vocational high school that I am assigned to until the next rotation, an Earth Science teacher is leaving at the end of the semester.  The five year Leadership Academy Principal, rather than interview the 3 or 4 ATRs with an Earth Science certification, has instead hired a Bronx charter school Science teacher with no Earth Science certification to complete the school year.  The reason, she is paid a "newbie" salary and she's has no tenure or institutional memory.  Who cares if she knows how to teach Regents Earth Science or not, its not about the students anyway.

What this Principal did is legal, since schools have a January window to hire outside the system for the second semester and I suspect most principals are doing the same thing as this Principal.  Therefore, I believe that Randy Asher will be having a difficult time convincing principals to hire ATRs unless he is given and uses his authority to put an end to this nonsense. At least in this case he doesn't have the authority or the will to overrule the Principal.

As for me?  I'm happy I was not interviewed for the position and relieved I am not being forced placed in the vacancy since the school is a long distance from my home and is difficult to park. However, that's not the issue, its that once again a Principal abuses their power by hiring what's best for their budget and control and not what's best for the students she is in charge to educate.

They are told from the very top not to hire ATRS. This is coming from the Chacellor, they want inexperienced and less qualified teachers.

That's the whole point chaz none of us wants to be force placed in a crap school with a frappe principal ,crappy commute and crash kids ! Please stop that advocating for that !!! It would be torture

Asher has to step on these principal's. He has the authority, he's probably hoping the principal's will listen. Most of them are rushing to hire newbies before Randy catches on. If Randy wants to succeed he'll have to exert his authority over those who have been given carte blanche for far too long.

I know this may sound crazy to some out there but for reasons that I cannot say. I have one more year to go. I want to volunteer to be an ATR. How can I go about this? Can I volunteer to be excessed?

7:31,
They want to decrease the ATR pool, not increase it. Despite what you might hear from a few envious pricks, it's completely demoralizing.

ATR life is demoralizing, but forced placement in a garbage school is torture. Pick your poison folks!

Force placements given out on Sesis everyone. Friend of mine was placed in the worst school. This is very dangerous.

I've been lucky in the schools I've been sent to. Good schools, good kids, admin is cool. There are benefits but it does suck knowing you're not really part of the community. You're just basically a sub at the end of the day. This isn't what I got into teaching for.

There are real bad places though who will misuse you. It's a risky gamble to take.

7:31 Pm
It's not what you think.....Feel like I'm part of a leper colony. The expressions and comments directed at us are just disgusting. Enjoy your last year and thank your lucky stars that you have the ability to start a new chapter shortly!

It is systemic age discrimination.

I cannot believe that our ole nemesis Eva Moskowitch had the balls to come out and endorse Betsy Devos for secretary of Education. Eva Moskowitch has proven time and time again that she is a real piece of crap and is as phony as they come. Endorsing this woman Devos who has zero experience in anything related to education is a complete crime and Moskowitch holds the crime. This woman has been a complete thorn in our side here in NYC public schools and one has to wonder where the hell did this biatch come from?? How is it that I have to listen to this lying creep who has nothing good ever to say about public education. MOskowitch has been getting away with more bull shit than I can ever remember and I am just waiting for the day that this dame goes down and eats sht.

The slow collapse of Western civilization has been ongoing since the 1960s. Rot from within on all levels. Education is marginalized, warped and chained to serve a new master: social justice warriors who want to usher in North Korean-style government ascendancy. Teachers with tradition and knowledge are denigrated by the Left as old, out-of-touch racist whites, and the reform movement is designed to get us out because we are 'incapable' of reaching the new 'diverse' student body.

New and desirable teachers are young bobble-heads who spout slogans and integrate civil rights into math and social justice in all facets of the humanities. You all know of what I speak. Sad, but our civilization had a good run while it lasted. 20 years from now none of us will recognize this country anymore.

They are allowing for abusive leadership principals to turn good experienced teachers into ATRS, while they hire less qualified and inexperienced fellow teachers. A UFT worker told me that they are not to intervene in those situations.

Oooh doom and gloom. Shivers down what's left of my spine. Do you think there will still have red candy apples? I love them.

My comments are censored on this site for whatever reason.

I spoke with Amy and atr assignment. Both said assignments are 4 weeks This was Monday morning they said it. I hope they're not lying

Do not trust the UFT.

The best thing we can do is to leave the system as soon as possible, or find a district where they really need teachers that want to teach and are allowed to teach. The disrespect, and the gotcha mentality together with the flyby observations are just getting ridiculous. Our Union is to blamed for having unqualified field supervisors conducting observations on ATRs who do not have regular classes. Setting up the most experienced teachers for failure it is just irresponsible, and a waste of resources.

Hope you luck runs out with a roving supervisor decides to target you.

509 they can target all they want....no atr is getting fired for incompetence. I mean how could they....atr's are teaching out of license and are held to different set of standards. ATR LIFE 4 EVER!