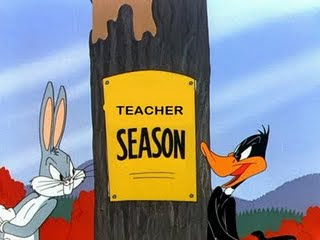 In the Daily News the other day, there was an opinion piece by the politically conservative Thomas B. Fordham Institute which claimed that firing teachers is an endless odyssey and demands that the rules need to change by either eliminating tenure, or removing tenure after getting an "ineffective" rating.

The truth is that teacher tenure does not mean a lifetime job, it simply means that the teacher has the right to challenge his or her termination in a 3020-a hearing.  This is known as educator "due process".  Teacher "due process" simply means that the School District cannot arbitrarily terminate a teacher without "just cause" and must present relevant evidence to an independent State arbitrator.

According to the opinion piece by the Fordham Institute the article claimed only 77 teachers had two consecutive "ineffectives" in the last two school years.  However, according to the UFT approximately 1% of the 70,000 teachers (700 teachers) received an "ineffective" rating last school year.  Assuming the numbers are true, of the 77 teachers with consecutive "ineffective" ratings, 57 were charged under section 3020-a and as of now only 9 were terminated.  Of course, the reason for such low termination numbers is that most of the 77 teachers were told by their lawyers that since the burden of proof is on them that it would be highly likely that the arbitrator will agree to terminate the teacher.  Therefore, the teacher would lose up to $54,000 of retro lump sum payments if they are terminated, they teacher than retires instead so as to get the retro payments.

Remember, it now takes four years to achieve tenure and once granted its only right that the teacher who gets an "ineffective" rating, be given a chance to correct their deficiencies before being subject to termination.  Two years is no way close to lifetime tenure.

This is just another case where the statistics are manipulated and the article's premise that its difficult to fire a teacher is far from the truth.
Posted by Chaz at 5:14 PM

Today, my February rotation was changed to the end of June. Has this happened to anybody else?

Question to readers of this blog: Do you personally know anybody who has received an "ineffective" rating? What did the person get the following year? I think I read that some teachers are actually being brought up on 3020A charges for 2 "developings". (At least in this case, the burden of proof is on the DOE) I would really like to hear what the readers have actually seen in their schools in regard to colleagues getting "ineffective" and "developing" ratings. I have not seen any tenured teachers get a "developing" or an "ineffective" rating but I have seen a handful of non-tenured teachers get discontinued in the past few years.

Hey Chaz can you add link to the Fordham opinion piece please?

Hold on. I thought two developing was ok and only two ineffective sled to 3020a ? What is the deal?

Hey Chaz i need some info. My wife has 12 yrs teaching and will leave the system at 46 in 5 yrs when I hopefully retire. Should she stay in the 25/55 program. Thanks

That's what the union would have you believe but the DOE does file 3020-a charges on teachers that get a developing and an ineffective. Its just that the burden of proof is on the DOE.

I would have your wife say in the program since she might change her mind and stay on.

The process whereby a principal goes after a teacher to fire him or her is really ugly. I have seen four teachers (all untenured) get fired from my school in the last three years. The tactics used by the admins are reminiscent of Stalin's purges replete with informants, secret meetings, emotional abuse, psychological torture, trumped up charges, lies and deceit.

Without due process all of us would be under such an axe. In my entire time in the DOE I only knew ONE honest principal who supported the teachers and upheld what you call decent decorum. All the rest have been like tyrants. I will take early retirement when possible. Forget a higher pension. This institution sucks out your very soul.

Thanks Chaz but what if she was 100% leaving the system.

Nothing is ever 100%.. I still believe she should keep her options open.