On Retirement Our Last Year's Summer Pay Is Apparently Excluded. 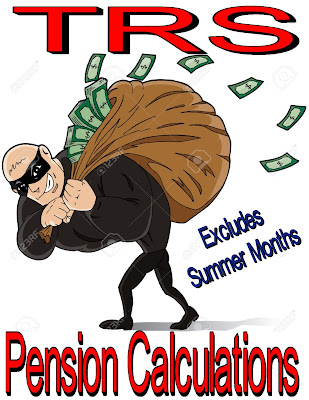 When a New York City educator retires, usually at the end of the school year, the TRS calculates the Final Average Salary (FAS) of the last three school years.  However, the FAS does not include any additional pay over 10% of the FAS so as to not to drive up the educator's pension by taking unlimited overtime in the last year.  While that limitation is well known the next limitation to the educator's pension is not.

Educators at the end of the school year gets payments for the summer months of July and August.  These summer payments are not extra checks but represent earned wages from the previous two semesters that have been smoothed out so that educators receive bi-monthly checks throughout the calendar year.  However, it appears the TRS does not include the July and August payments when calculating the FAS.

The TRS has remained mum on the apparent shortchanging of their educator pension calculation and a lawsuit was filed in July of this year to force TRS to include the July and August payments.  While the amount that TRS shortchanges the educator varies widely,  I used retired teacher Irving Lieblich's pension calculation, as reported in the New York Post as the example.

According to Mr. Lieblich since he retired in June of 2011, he has been shortchanged on his pension by $241 his first year since they didn't include the summer months, when he made $93,656 as a 2011 base salary.  Instead, those two months were replaced by the 2010 base salary that saw him receive only $90,054.  Consequently, Mr. Lieblich is owed $1,446 according to his calculations since retiring.

Hopefully, Mr. Lieblich's lawsuit is successful and the TRS will include the two month summer pay when they calculate the educator's pension..
Posted by Chaz at 1:01 PM

Question, Chaz: Can you beat the July/August short change by coming back in September for a few days, then putting in papers?

Second Question: Where is the UFT on this? Why are they silent?

Another accounting trick used by TRS that short changes UFT members is the way TRS calculates interest for the 7% interest on the TDA account. TRS witholds paying compounded monthly interest until the start of the following year. As a result, there is a large increase in interest for the January monthly statement )which becomes available online in February). This gimmick is probably how the UFT came up with the scheme to cheat teachers with their delayed retroactive pay.

Interesting question. However, the problem with that is you will probably force TRS to include the summer pay in their final FAS calculation but then wait up to three months before TRS sends you a pension check.

Seems like a plan that educators should consider if they can wait for their pension check.

(I stumbled onto this factoid because I subbed for a year and then taught summer school and then started my fulltime career. When, years later, I gathered up all my loose days for service credit I received credit for my sub days but not summer school days (2 months) because they (the summer school days) were considered part of the following year. And I already had received a year's credit for that year.)


To be honest I haven't hear of this problem

"Teachers are shortchanged because the pension system does not include the salary for the last year in the classroom, which is almost always the their career-high pay, the suit says."

In my experience the last year is virtually always part of the TRS FAS calculation. Notwithstanding a larger late June paycheck. And notwithstanding the fine-tuning TRS does a few months into retirement.

Any chance this is an error particular to him?

Its not the last year but the two months of July and August of that last year that is apparently not included in the FAS and no TRS fine tuning accounts for this omission.

I hope this suit succeeds but give it very little chance.

Let's see if I understand it correctly:

If a teacher retires July 1, we currently get our regular summer checks as usual and get a pension check for the same months of July and August. I think that is kind of double dipping and it is why we are encouraged to retire at the end of the school year.

We can retire in September and then the two months from the summer are added in for the purposes of calculating the time we worked and included in the pension calculation but we won't start receiving retirement checks until September because we haven't yet retired.

We got a law firm to take this one but we can't get one to do a seniority discrimination case for the ATRs?

It's all about the money the lawyers see in a settlement. What a world.

If I have this wrong Chaz, please correct me. I just read most of the case on the link.

You got it right. However, retired members can go up to three months before TRS sends out the first retirement check and that's another reason to retire on July 1.

TRS people told us in the TRS retirement class that they are much faster these days getting checks that estimate our retirement out and then correcting later.

1. (Chaz) The use of the inaccurate term 'summer pay' is not helpful. It is NOT pay for work in July and August. It is pay for work September thru June. Irrelevant in any case.

2. Lately the first pension check has been arriving mid summer. Assuming July 1 retirement date. A few checks later the recalculation/adjustments are made.


4. (James): Nothing to do with any sort of double-dipping or fear thereof. See 1.

5. One possible explanation (and it is stated in the article) is that his last year salary was not included as one of his high-three consecutive years (at the time of the first estimation/payment the system had him as earning less that last year...since his last check or two were not yet processed in TRS for pension purposes). Probably just a one-off glitch in the recalculation. And the newspaper is just printing nonsense/speculation

"Teachers are shortchanged because the pension system does not include the salary for the last year in the classroom, which is almost always the their career-high pay, the suit says.
For example Leiblich, who taught for 24 years, retired in June 2011, when his salary for that year was $93,656."

Your calculations seem a bit high but if the stock market continues its course, its possible to achieve your goal.

One can retire on October 15 through any of the next several years through 2020. Thus your retirement pay will include your summer pay and you would have your bonus to live on until you receive your first pension check. You would also gain two sick days doing this method to use as one seems fit.

Great idea and that certainly would resolve the summer pay issue.

anonymous, you are absolutely correct. if you start working on jan 1 to 15, you have not accummulated sick day. one sick day will be added to your card after every 16th of the month.

Any idea how FAS is calculated when one retires on Feb 1st?