Why Alexandra Estrella, As Well As Others, Should Not Be A Superintendent. 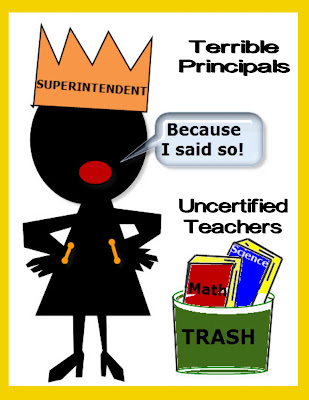 Amiee Horowitz:
She is a close friend of the Chancellor and oversees the failing Renewal Schools as Superintendent;  Ms.. Horowitz, has been associated with some very questionable issues and you can read them Here and Here.

Juan Mendez:
Where do I start?  Since he became Superintendent he has protected some of the worst principals in Queens.  You can read it Here.  Moreover, Mr. Mendez is a defendant in a racial discrimination lawsuit brought by the federal government. yet he still is a Superintendent.

Lenon Murray:
This Queens District 29 Superintendent was arrested for repeatedly groping a female co-worker and was finally fired once the arrest occurred.  Unlike other educators who are not allowed to enter a DOE facility, Mr. Murray visits his office when he feels like it and a lawsuit was filed by the frightened female subordinate who must see him every time he appears at the office.


Estrella Alexandra:
Now we have Superintendent Estrella Alexandra, who was fined $3,000 by the City's Conflict Of Interest Board, for selling a teacher her house, while Principal of her school.  Yet, the Chancellor saw no problem making her Superintendent of District 4 in Harlem.  Yes, the very same Estrella Alexandra who selected and tried to protect Monika Garp as Principal of CPE1 and ignored protests by parents and teachers and even the Mayor before finally being forced by the Chancellor to remove the Principal from the school.  You can read the stories Here and Here. Interestingly, Daily News education reporter, Ben Chapman, once again, did not do his due diligence.  He failed to mention the Superintendent's involvement in the CPE1 fiasco and took the DOE pr spin which claimed she has a spotless record.  Another terrible reporting job by Ben Chapman.

The bottom line is that none of these Superintendents should be in the position they're in, especially Estrella Alexandra who has shown poor judgment and is not trusted by parents and teachers in her District.
Posted by Chaz at 12:01 AM

Failed Principals become Superintendents because Mike Bloomberg explained and insisted to de Blasio and Farina that the best way to control the DOE budget and a rank and file was to promote "manager-principals" whether good or not to harass, keep on edge, and downsize experienced teachers.

This all goes back to Bloomberg. And, our "friend" De Blasio has no problem with it.

Hi Chaz. Sorry to go off topic, but I have a question. If a teacher is TERMINATED at 3020a, is his pension affected at all? I ask because I believe in the NYPD, an officer loses his pension if he is terminated. Thank you for your time.

3020a are BS. When someone knows they are being targeted what do you think the reaction is? Nervousness, anxiety, high blood pressure, feeling of being on edge, etc. Administrators look for anything to pin people. A lot of these administrators are full of shit!

Only the police has the pension removal process. Teachers get their pensions as long as they meet the vesting period.

I could be wrong, but I thought a teacher could lose their pension if they commit a gross violation of the law which is integral to their job, such as sexual or physical abuse of a student. If that's the case, then the teachers would have to resign/retire before being terminated in order to maintain their pension benefits.

your summer is over my former fellow colleagues and now the stress of a new year is shadowing you like the silly eclipse a few weeks ago. for some of you the year will bring joy, happiness and accomplishment. for too many of you it will bring stress, complaining and no one to turn to for help. I put the nyshitty school system behind me. I have been on 6 interviews in the suburbs and 4 of those interviews turned into a question and answer about how bad the city is. they know it and I knew it. its hard to put into words how deflating the doe and uft have been I just hope I can recuperate and put it all behind me!

Not true. However, in a plea deal arraignment with the court, the educator can agree to give up their pension. Otherwise, the pension must be paid, no matter what the crime is.

951am here--Chaz thank you for your answer to my question. I am surprised that the police are the only ones punished with having their pensions yanked for a crime. Here's a for instance, let's say a member of the DOE, DSNY, or USPS is convicted of assault. That public servant may be terminated from his job for "conduct unbecoming", or violating a morality clause etc., BUT those members still keep their pension. An NYPD officer who is convicted of assault for an off-duty minor altercation not only can get fired but have his pension
yanked. That is so unfair. thank gd DOE employees are treated differently --thank Gd!!!!

As a result of the judicial decisions, there was still pension forfeiture if a teacher had been fired for serious misconduct, but no longer for incompetence.

Click on the + next to "New York City Administrative Code."

Take a look at numbered paragraph 1.

Does it mean that there is still a pension forfeiture provision in situations where a teacher was dismissed for serious misconduct?

Its funny that they failed to mention that Alexandra Estrella was behind a cheating scandal during her time at Esperanza Preparatory Academy(https://www.chalkbeat.org/posts/ny/2012/10/10/most-monitored-schools-were-flagged-for-cheating-in-advance/).
Not to mention the constant principal/staff turnover at EPA as a result of her tactics.
She is also the reason why David Baiz at Global Tech was replaced, and supported Monika Garg at CPE1.
District 4 deserves better, its sadly the kids who lose out at the end of the day.

Oh come on, Chaz: "Another terrible reporting job by Ben Chapman" ? That's hogwash. If my story was so terrible why do you link to it on your blog? I appreciate it when you share my work and you're welcome to criticize I suppose but insulting me like this is mean-spirited. And anyway you're wrong about my reporting. It's terrific. Thanks!

This is a cool round-up of supes though.

Check out the principals Estrella has hired in her district (4).

Some are her friends and cronies.