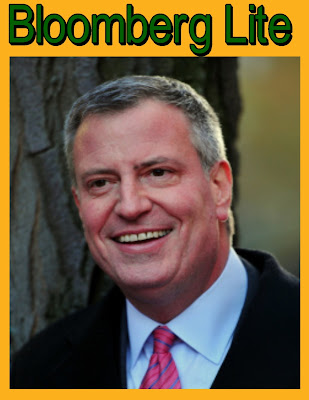 When Bill de Blasio was a candidate for Mayor he positioned himself as the anti-Bloomberg.  His campaign promise was to reduce class size, bring respect to the teaching profession, and  no more closing schools.  To be fair, Bill de Blasio did live up to his promise in limiting charter, schools, appoint an educator as Chancellor, and to cooperate with the UFT on a new contract,  However, in the first term Mayor Bill de Blasio appointed a Joel Klein Deputy Chancellor (Carmen Farina) who turned out to be more the problem then the solution as she kept 80% of the Bloomberg era policymakers and picked Superintendents on who they knew rather than what they knew.

Ask the teachers in the trenches if the classroom environment is different now then under Michael Bloomberg and their answer is a resounding no!  Class sizes are far too large, Charlotte Dainelson is still used to evaluate teachers, and 3020-a charges against educators remain high and essentially unchanged, when compared to the third term of the Bloomberg era.

In addition, the "gotcha philosophy" is still the theme of the day and the DOE still goes after veteran teachers, either by their fair student funding policy or by Charlotte Danielson as administrators used the rubric as a weapon to force senior teachers to either retire or face 3020-a charges. The ATR pool continues to exist with 1,300 ATRs still without a classroom, despite candidate Bil de Blasio's intention of placing them in vacancies when he became Mayor.  Finally, the racial/income achievement gap is as large as ever.  Another example of Mayor Bill de Blasio becoming more like Michael Bloomberg is he forced one of his PEP appointees to resign after she voted not to close two Far Rockaway schools.

In some ways the Bill de Blasio administration is worse.  He allows cellphones in the schools despite evidence that student cellphone use reduces academic achievement.  He also limited student suspensions and is a supporter of restorative justice instead.    The result is the most students feel less safe in the schools. The lax student discipline code is a disaster.  Read the NYC  kids pac report for all the promises that Mayor Bill de Blasio broke in the 2016 Mayoral report card..

The bottom line Mayor Bill de Blasio is becoming more like Michael Bloomberg and that can only increase he already low morale of the classroom teacher and hurt the students down the road.

(1) Cell phones.
(All kids carry them now in class and use every opportunity to use them.)

(3) Video games on cell phones and texting.
(Probably 980% of the students I have are utterly addicted to either/or)

(4) Danielson's Disaster
(This control-freak/micromanageing 'system' is usedm ore as a tool of psychological terror against teachers than a help. In fact, it only 'reveals' 'problems' and does not encourage anything but fear, especially since so many admins are tyrants now.)

(5) Admins
(All these leadership academy principals were taught to view their employees as the enemy and lousy. The 'evil/racist/incompetent/out-of-touch' teachers are the reason the kids are not learning. "Off with their heads!" - starting with the dreaded 'paper trail.'

(6) Our clientele
(The quality of most students nowadays is very ,very low. Too many broken homes, too much poverty, too much everything bad.

I advise any teacher with more than 10 years to go, get out, because it will only get worse.

Deblasio has been disappointing -but still will take him any day over Bloomberg. The union is the problem--they fought and pushed back against Klein/Walcott- on a daily basis--and they have they been very cordial with Farina.

De Blasio is using a classic strategy. Each hand is doing something different. With one hand he shows you he wants universal pre k for 3 year olds. With the other hand, that's behind his back , he is letting the kids loose inside the school building by claiming it is wrong to punish them. So he lets them have cellphones and no suspensions until they kill someone and that's how he stabs the teacher in the back.

So that's what Bill DeBlasio did for us

He's trying to play both sides by lying to each one.

Same shit different hairstyle. And he lets his wife make our decisions.

"I advise any teacher with more than 10 years to go, get out, because it will only get worse."

And what if one has 11 years to go, or 12 or 13? What's one to do then? Take their close to 100 hundred dollar a year salary and dump it and go and try to find a job outside education with a degree in education they spent time and money on? You're advice is one given out of fear and just too much passion on your part with what you've personally had to deal with in your given case. I'd agree with it if one was talking to someone who showed interest in teaching in NYC but had not yet made up their mind. I'd personally never tell a student this but think I would if it was a family member or the child of a close friend. It is only going to get worse, but to tell teachers who have been in the system for 19 years (according to your math) to get out now is utterly ridiculous. Please stop.

Teachers are treated like the enemies. Fariña lied to us.

So did Mulgrew - ask anyone who went to his Boca meeting last summer. Now he has the nerve to charge us $38 to see his bald head reflecting off the floresent lights. I’ll have wear my RayBans.
Happily Retired Harry

There are always negative people, don't bother with them. I wish morm or that other silly guy would post again. There's a lot of good info on this blog, but it's also good to laugh.

@1029 PM . Hello My Friend: I am not morm or even know what morm is or does. This is Shady again. I am not sure if I am the silly guy who is also a good laugh? Be more specific.

On the other hand, I have been keeping a low profile this year. I was assigned to a fuckin principal who is completely out of his fuckin mind. The guy is psychotic. He called me in my first day of arrival and threatened to "rip me a new one." Not sure what that means but sounds painful. I assured him I do not want to be ripped a new one.

He then tried trading me for another ATR but the other principal demanded 10k transferred to his budget if he takes me. This psychotic principal did not want to give up the 10k in order to get rid of me. I do not go cheap. I told him 10k is a bargain to get rid of me. One P paid 25k about 3 years ago. Once I arrive to new school - I demand some of the money the new school received is given to me in per session.

He had me sign a confidentiality agreement that he won't go after me or u-rate me if I do not blog, write anonymous emails and/or rile up the staff against him.

This is the reason this silly guy who makes you laugh and entertains you HASN'T been on here.