Why Does Bill de Blasio Want School Speed Cameras Rather Than Speed Bumps? 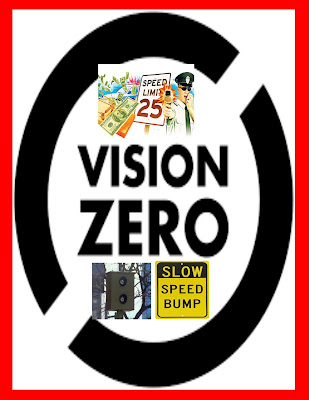 
The existing speed cameras only operate between 7am and 4pm during school days.  However, Mayor Bill de Blasio wants them to operate during daylight hours and add another 150 school speed cameras to the existing 120.  He claims it's a school staff issue but I suspect its about the money for fines that end up in the city coffers.

Instead of speed cameras, every school street should have a speed bump.  This way all cars, not just law-abiding ones will slow down   Why didn't Mayor Bill de Blasio propose school speed bumps?

wow!! about money. who would have thunk that!!!! and your only a zoo keeper in nyc. what a waste of talent. please cure cancer next.

I remember paying a fine for those speed cameras out here in Long Island where I live only to find out some weeks later that they were removing them.

One of the hallmarks of 1984, the book, is that cameras were everywhere to watch everyone.

Leftists love the surveillance state, and it's no coincidence that leftist corporations of the world spy on us more and more (google, twitter, amazon, etc)

@7:26
When Carranza was announced as Chancellor - Carmen moved Horrorwitz over to a new title called "“Executive Superintendent of the Co-located Campus Initiative.” Carmen then went to work for Horrorwitz about 3 days a week collecting a salary. Not voluntary.

Copy and paste this link by NY Post: https://nypost.com/2018/03/17/ousted-head-of-renewal-school-gets-cushy-new-gig/

This week Horrorwitz was forced out and resigned/retired. Carmen is still going to work and report to this new office whether or not there is someone overseeing these co-located schools. Carmen does not give a damn. She is not willing to leave and insists on fighting and staying on forever. It is all about $$$ and power for this old hag.

I still remember when Klein and Nadelstern would tell people how they got rid of Carmen the first time around. She was a deputy chancellor in charge of "teaching and learning". They would crack up laughing thinking they killed a dept called "teaching and learning" to just get rid of Carmen. They stripped Carmen of all duties and responsibilities as deputy chancellor but she still would not leave. Even with no department, no employees and nothing to do - Carmen still stayed on a deputy chancellor. She finally was run out of Tweed when Nadelstern tricked her into retirement without her knowing she was actually retiring.

Well now, here we go again. Carmen is still reporting to work. Collecting a salary for 2 to 3 days worth of work. Has nothing to do and no responsibility or accountability . HOW DOES this happen? How can someone not get a hint or a clue that you need to go?

As far as Dorito Gibson goes... same thing. Dorito was not given the Chancellor job, was stripped of all her responsibilities but still reports to work. Come on Dorito? enough is enough... When Nadelstern was passed over for Chancellor then he immediately left.

Cameras in the classroom coming soon. Mulgrew will agree to it for a .05% increase.

Speed bumps are just another city revenue gimmick. These scams by the city to ticket us and raise revenue any way they can is disgusting. In other cities and towns people vote against this nonsense. Bring back Carmen Farina. She did so much for the DOE and city. Loved seeing the confused looks on her face or her mean and ugly spirit. Now, that Amy Horrorwitz was forced out what happens to Carmen?

Carmen created a position for Amy a week before the new Chancellor takes over. Carmen then announces she is going to work for Amy about 2 to 3 days a week. Clearly, nobody in the Mayor's office wanted this nonsense. They waited until Aug and got rid of Amy. Carmen as of last week still wants to continue working. You have to love this lady's classless moves. Retire already. Nobody wants you around. You did a little more than nothing in the last 4 years. You did just 1 percent more than Walcott who was tied with Kathy Black as being useless.

These speed cameras are not just a revenue generating scam but are another front in the leftist war against motorists. DeBlasio and his ilk want the passenger car eliminated and for everyone to ride bikes like in Red China or to use public transit, as that will make everyone equally miserable - the ultimate end goal of socialist "equity".

@T.J.L . interesting... never knew they had cameras exceeding school zones. I know in one city they gov't sped up the red light camera by .01 seconds to get extra revenue but were caught at the end.

Instead of focusing on speed cameras, he should fully fund NYC schools. How about that?!